34 year old Trent Stromkins is a graphic designer by trade and a drifter by choice. A life-long car nut, Trent was driving around Canada in a heavily modified Honda Civic until he came across a drifting DVD nine years ago. Since then, the Civic has made way for the Corolla that you see before you.

Trent can usually be found crossing the border to bump and grind his hachi's butt against the walls of Evergreen Speedway, in Monroe WA. In 2009, Trent finished 3rd in Evergreen's drift season, and last year he was invited to California to go for his FD Pro license. Unfortunately he suffered an engine failure in practice, so he'll be hoping to achieve that goal this year.

Inside the AE86, Trent receives a Kevlar-shell MOMO bucket and TAKATA harness, with the passenger given an OMP seat.

Fortress fabricated the roll-cage, which is built to FD specifications.

Gussets have also been added between the cage and A- and B-pillars.

Raising the rear edge of the hood is a cheap way of helping engine bay heat escape. Instead of spacers, Trent drilled out some lug nuts. Cool! 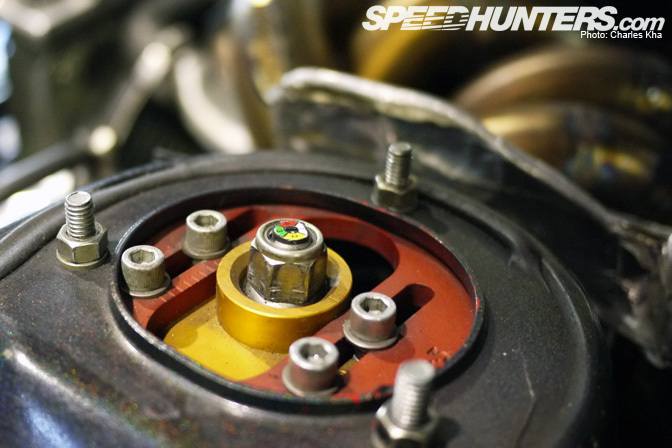 It doesn't come as much of a surprise to find a host of suspension mods on the Corolla GTS. Trent raided the Techno Toy Tuning catalogue and came away with a set of coilovers (front: 8kg/mm, rear: 6kg/mm), lower control arms, tension rods and five-link. Both swaybars are by Tanabe. Between the back wheels is a welded rear end from an '81 Supra with a Yukon 4:10 ring and pinion.

There's no 4A lurking beneath the hood…

…As Trent decided to cross-breed his '86 with a Nissan SR20DET motor and transmission from an S14 Silvia. The Disco Potato turbo hangs off an impressive custom JSP manifold and is mated to a 38mm wastegate. Along with a beefed up fuel system, Splitfire coils and an S13 SR throttle body, Trent has created a more than capable powerplant for his hachi. Fitting the Nissan engine was done thanks to Fortress engine mounts.

While the spotlight is usually reserved for the pro drivers, those in the feeder categories often deserve just as much recognition. For these guys, the battle is not on the track; it's making it to the track. Without sponsorship backing, people like Trent Stromkins do drifting the hard way. They rely on sheer determination, passion and a bunch of mates to make it out to events. To Trent and the rest of the Drift Safari crew, thanks for giving Rod and I the opportunity to spend an afternoon with you guys. See you at FD Seattle!

How about that Veilside-kitted RX7 in the first pic? WOW!

Has the guy that welded that rollcage together ever had his welds tested? If not he probably should, a monkey can run a better bead then that.

Ive seen this in action, he definitely knows how to slide!

Fantastic AE86!! Love how many, like him, spend tons of time on a particular car....dedication!

I absolutely love it! Continue to do more features like this

got to say i like whats happening under the bonnet. must say i've never heard of a "Disco Potato turbo" before, but i'm learning or a least trying to - liking the sweet (but blurry) RX7 in the background of the first photo, it looks ready for action!

Has the guy that welded that rollcage together ever had his welds tested? If not he probably should, a monkey can run a better bead then that.

Even better is seeing this car in action.

I saw this car on the 8-6 day meet last year in seattle...the cage is effing hardcore. The rest of the car looks like it is ready to rock at a moments notice...no reason why this thing shouldnt be a feature, or be all over the rest of the cars running formula d. Thing is a beast.

I agree with JD, it may sounds harsh, but those welds don't look too good.

I am not a welder, but I've seen tons of nicely welded cages, and this unfortunately it's not one of them. I hope that in a crash they will not break

great car ! but pleas show pics of the veilside rx7

More features on the up and commer's.

Very nice car can see that a lot of work has gone into it and i hope to see it in action.

Any chance of a feature on the blue R32 in the background of the last photo.

KyleM, my car was featured here in march. Here is the link.

I remember when that car got its first swap...gold top and ITB'S. Saw it go from stock to almost where it is now...glad its not yellow anymore.

Yay Stromkins !!! Also is that engine bay photo taken from the driftsafari website!!!?