With Paddy down in the west country covering Japfest, I was 300 miles north at Nissan's massive Sunderland facility to bring you the action from the second round of the Drift Allstars series.

Round two was quite an eventful couple of days for me. More on exactly what I was up to later in the week.

As with the opening round a whole host of drivers made the long trip over from central Europe. Benjamin Boulbes in his awesome M5 V8 powered E36 was just one of the French contingent present.

As the event was scheduled over two days, the Saturday was meant to be a relaxed practice day. A chance for the drivers to get familiar with the custom built track and a chance for the Drift Allstars staff to make sure the track offered everything that they wanted for Sunday's competition.

An informal driver briefing was held just before the track opened at 1pm.

To give the drivers a chance to dial in to the track and make any necessary adjustments.

Not everybody had a smooth ride, with a few mechanical gremlins sneaking in here and there.

Drifting can be a weird and wonderful sport at times. Every so often you see a car that just stops you dead in your tracks and forces you to take a closer look. Alberto Cona turned up with possibly the strangest one yet! [Rolf Harris tags on]Can you guess what it is yet?[Rolf Harris tags off] 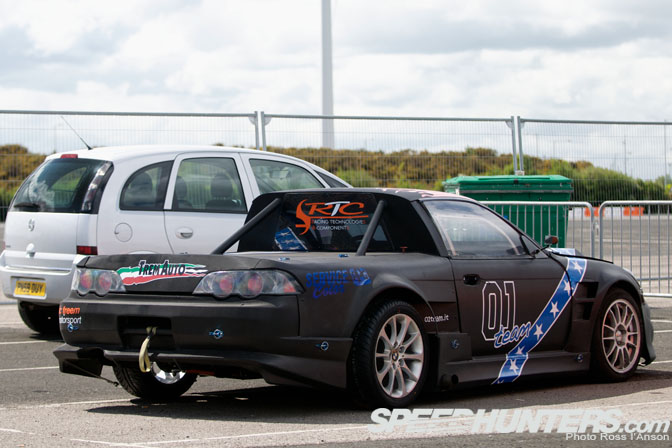 It's actually an S14! No really, it is. It's an S14 converted to a pickup, with a Toyota Celica front end, Honda DC5 rear lights, BMW rear axle and powered by an LS V8!

Fresh from Japfest, Walton Smith and the Jap-Performance crew turned up on the Sunday morning with the RB powered wide-body Impreza.

The ex-Steve Usher S14a returned to the UK for round two ,now minus the S15 front end.

With competition day upon us, everything shifts up a gear.

The driver briefing takes on a more serious nature. With the judges explaining exactly what they will be looking for from the drivers throughout the day.

Jon Calvert was having to car share with Ian 'Bizz' Philips' V8 R33 for the day as his S13 was having engine issues.

The assembled media awaiting their briefing. From right to left – Frazer Gordon, Peter Bartle, Ash Burrows, Andy Harris (head of all things safety), Ian Gratton and my lens hood, polarizing filter and coffee cup holding my place as I took the shot.

Having not slept in two solid days Ben 'Bon Bon' Broke-Smith arrived just before qualifying. Suffering exhaust fitment problems at Japfest the previous day, the problem was sorted in true 'Bon' Style – cut the system off and make it poke out of the bonnet!

As qualifying got underway a nasty light rain started making the track tricky.

… it was of course a planned decision to bring you an in-depth 'behind the scenes' feature. I wasn't hiding from the rain at all.. no siree.

It was quite busy up there. Tv crews, commentators …

… and with the best seat in the house of course, the judges.

"Like a drifter I was born to walk alone" During the interval commentator George Tilling gave a spectacular karaoke rendition of Whitesnake's Here I go again.

Also during the interval you could get a grip demo ride in a KTM X-bow. I really must have a drive of one of these at some point.

Thankfully by the time the top 16 competition got underway the rain sorted itself out and the track started drying out.

Bon back to doing what he does best. Driving a big four door mobile smoke generator.

Walton Smith had by far the greatest angle into turn one. Now in its second year of competition the RB powered Impreza is a seriously sorted drift machine.

With custom built tracks it's always tricky from a photographers perspective where to shoot different parts of an event. For the finals I took a gamble and went across the track from the press box.

Once the action on track is over its a quick sprint over to the podium for the presentations. Just enough time for a quick lens change.

I noticed as Nigel and Bon were handed their bottles of champagne they immediately took the safety catches off the bottles, leaving James at an immediate disadvantage. 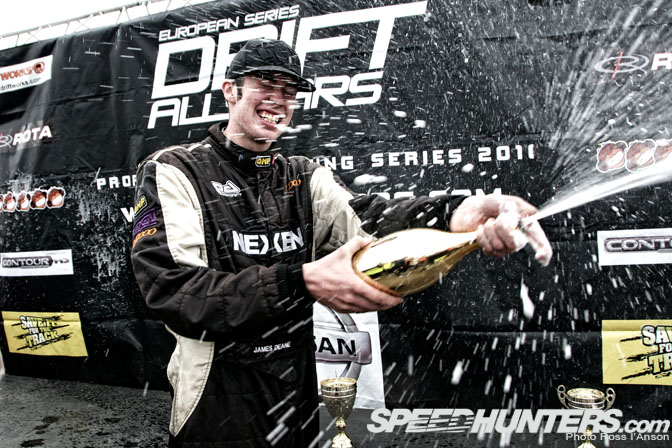 Run away, recoup, and come back all guns blazing!

i've seeing quite a bit of the Low Brain Drifter car here & there, nice to an KTM X-Bow tearing down the track on a Demo run. as for the Truck/Car effort.. i can see what the owner was trying to achieve and maybe he did reach his goal, i can't honestly see why but hey.. nice to have diversity. it looks 'ok-ish' - a parts bin raid in effect. - thanks for the write-up!

That S14 pickup is the weirdest shit I've ever seen. But in a awesome way

Hey all loved that jzx81 mark ii love that car a lot made me crazy really a could not believe that jzx81 the one and only http://www.jzxproject.com

Ben 'Bon Bon' Broke-Smith's car is cool, but that car-truck thing is ugly as sin!

I've seen that S14 truck before. It used to sport a pink paintjob, and a gigantic R* sticker on the back panel. It also had different wheels too.

Cracking report Ross. It's nice to get a bit of what goes on in the back room.

Awesome work as allways!! Looking forward to see you again at next round Ross!

Superb pics as usual Ross, I have to admit, I may have given bon the idea to do the exhaust that way, to stop him cutting up his original exhaust haha! Was a Late night in Garage-D

Top work Ross, A very enjoyable weekend had by all (about 3000 of us lol)

Great pics and write up, loving the pick up!

JDM Allstars used to be full of good looking cars driving the piss out of them. It is now full of a ton of ugly cars with generic driving.

A brilliant weekend and the pis show it all,realy good job boys and thanks once again for mentioning my car was full of fail and not the driver lol

whoever destoyed that s14 wants

that was a mint event bon bon was fucking class that is some car. shame about biz he still did well dont think he is used to that 6.3litre engine big jump from a 2.5

that s14 takes the cake for biggest automotive hackjob in history

ive seen that jzx81 for sale awhile ago... never thought i'd see it again on speedhunters hahaa