For a change the weather in Mondello was actually quite good. Bright, dry and just enough wind to help clear any tire smoke from the track. One of my favourite aspects of these practice days is just how chilled out the events are. I guess I'm so used to competition environments where everything is go-go-go all day that the change of pace here is more than welcome.

The sweeper at the back of the paddock was a pretty cool spot to shoot from during the day. The light always seems to be good here and it's positioned in just the right place to capture the cars as they power into the third gear transition (or fourth if you're brave enough)

Asides from an unfortunate incident with a tire bale earlier in the day, this street spec S14 looked pretty mean.

Ffrench was on it all day long, giving his Altezza more use in an afternoon than most cars would receive all season.

Chris Brady was another pro competitor who took advantage of the day to develop his MCNSPORT built SR86 before the Irish drifting season kicks off next month.

Blue skies and a relaxing day of drifting, a perfect way to spend a Saturday !

Brown wouldn't be my first choice of colour to paint a car but I will concede it suited the look of this R32 Skyline.

I've always had a soft spot for SilEighties and Kenneth Murphy's car is no exception.

Alan Lenihan was making the most out of the alotted track time in his showroom condition S15 fronted PS13.

What this white over black AE86 lacked in power, the driver more than made up for in sheer balls out driving !

Coming back in through the hole in the hedge allowed for this shot as drivers upshifted in preparation for the sweeper at the back of the paddock.

Halfway down a straight on full opposite lock, lining up the next clipping point.

Adam O'Connor's S14A was a car that caught my attention at the last drift practice day. It has just the right balance of style and performance for a street car.

Amy Griffin was still going strong long into the afternoon. Amy is one of the only regular rotary drifters in Ireland, which should help disspell any rotary reliability myths.

Bashed quarter panel, exhaust hanging off and still no let up for this 180SX.

WOB still going hard at it !

Eddie Quirke's 180SX was on flying form asides from the lack of front wing and bumpers !

Peter Taylor in the 'bought-for-a-thousand-euros-and-given-lots-of-death-on-a-regular-basis' R32 Skyline. For an allegedly standard car, it absolutely flies !

The pit wall has become a sort of attraction / feature / target for those attending. Going by the tire marks at the bottom of the wall in the foreground, it would seem some have tamed it. I do know however that the wall has claimed its fair share of victims too. 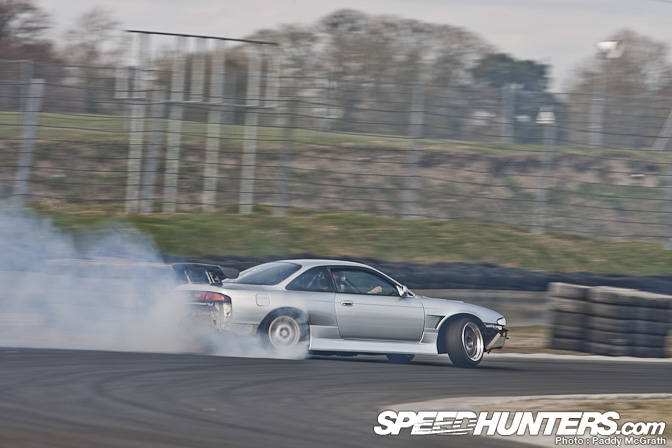 Dan Moorhead was another who stepped up to help out with the surplus of people for the Japan Tsunami Appeal.

As the day rolled to a close, I think everyone was left searching for a few odds and ends that may have gone flying into the scenery at some stage during the day.

Another month, another drift practice day. I'm already looking forward to the next one.

P.S. I just want to add a special thank you to all of those who helped us raise money for the Irish Red Cross Japan Tsunami Appeal. In particular I'd like to extend special thanks to Wesley Keating, Barry Leonard, Dan Moorhead, Chris Brady, Adam O'Connor, Peter Taylor, Brendan Kearney, Christy Carpenter, Alvin Reid, Joe Coady, Colm Murray, Derek the tire changer and all those who came along to support the appeal. Thank you !

back of that 13 looks too damn nice!

More info on the Peugeot 306 that apears on the last picture????

looks like a very eventful day.. some quality photos & coverage always helps while those hours a way!

Yea more on that Peugot!!!!