Hopefully you guys won't mind another post on the Pagani Huayra, but for those interested we've released five new Desktops of the Huayra in SHIFT2 Unleashed.

The team working on SHIFT2 UNLEASHED has been in close – and constant – contact with Pagani (and in fact a lot of manufacturers), and the amount of data that has been implemented into the in-game counterpart astounded me. In this pic you'll notice the rear wings which flip up to create downforce. Under hard braking the rake of the flaps increase, acting as an air-brake to slow the Huayra down.

The two winglets on the nose of the car also activate at speed. Although you can't see it clearly in this pic, in the game the open flaps reveal intricate detailing of the intercooler beneath. The high level of detail continues with the interior, which has all of the stitching, leather grain and carbon fibre that the real-world counterpart has. I often found myself pulling over and using the helmet cam to look around the cabin!

I've been playing racing games for a long time now. My addiction started with Geoff Crammond's Grand Prix 2 (continuing on to GP4), and I spent many years driving endless laps in rFactor. Although I've only been involved with SHIFT2 UNLEASHED for a couple of months, it's been a great experience to see how far the game's developers have gone to make it realistic, right down to receiving the CAD data for individual suspension components.

I racked up quite a few hours behind the wheel of the Huayra (in SHIFT2 UNLEASHED that is) for the Pagani Huayra in-game video that was released today. Admittedly I'm not a very good driver with a controller, so most of my seat time has been with a G25 wheel or a G27 on a D-Box simulator. It's certainly a car that commands respect, particularly with all of the driving aids turned off! 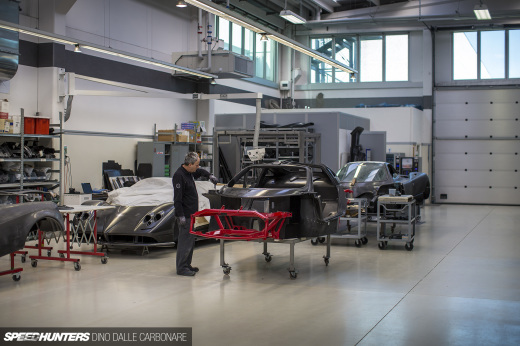 Since you are familiar with a sim like rFactor and familiar with top wheels, and are sayng that you played Shift2 on wheels....HOW IS IT?? Is it actually 900 degrees? Is the ffb better? Can we adjust Linearity, Dampening, analog rates, etc? Do the cars jump still?

I have asked in every single NFS Shift 2 post and nobody will answer this simple question. PLEASE?

I'm eager to see and feel this game for myself. I'm still wondering tho, will you beable to put persay a ford motor in chevy or vice versa or any combination. like i would like a V8 NSX LOL

I'm gonna crash the heck out of that thang. Not on purpose, I just know it is going to happen... LOL

This is going to be one of the best games yet. I honestly can't wait for it. The drift physics better be fixed in this one because the drifting in SU1 wasn't that great. Hopefully we can tune cars as well like the camber adjustment, damping, caster, tire pressure, brake pressure, etc. I'm pre-ordering it as well. This Pagani is also one of the sweetest-looking cars I have seen.

wow thought it was real life pics for a sec...

what hell.. at least i don't have to pay for the repairs when i crash..