It's update time again Speedhunters and a lot of work has gone on since last time. When Paddy arrives we scurry around to get stuff out of the way and stuff in the way that we want included. He seems to have caught that moment quite well.

The Owen Development's turbo is becoming a more permanent part of the build and very shortly it will be bolted in place for the final time. The downpipe has been made with the intercooler piping currently being done. The oil and water lines are also nearly finished and we just got to fabricate the intake pipe and then it is complete.

Wiggens clamps will be used on both hot and cold sides of the intercooler and since Paddy was here the screamer pipe is done and attached to the Tial 60mm wastegate.

Speaking of the cold side, here it is and it will be completed very shortly.

The exhaust manifold has returned from Martelius Exhausts in Finland and it fits in without touching the steering column. Phew !

The interior has come along nicely and I have to give a plug to K&N as they hooked us up with air and oil filters on very short notice and we are very happy to be running the best filters in the world!

The racing dry cell battery has been mounted under the passenger seat for optimal weight distribution.

A lot going on in this picture, our carbon AE86 dash has been fitted and equipped with Defi gauges and controller. You can see we made a custom steering column and got rid of the ugly Toyota one. Pedals are now in, as are the fuel lines and the ASD e-brake has been positioned to my preference. I have decided to install the aluminium centre partition panels for testing, these were made as templates for the carbon fibre panels and will be replaced with carbon fibre at a later date.

Here you can see the tubular intercooler mount and i think this picture gives you a good idea of just how far back the engine has been positioned.

This gives you a better shot of the aluminium partition panels and fuel cell firewall. The fuel cell will be filled through the quarter window. The rear radiator is now bolted in place and the coolant pipes are also connected.

The pipes returned from Martelius in Finland, with their ceramic thermal barrier and dispersant coatings. One is a matt black finish and the other is gloss black which looks pretty cool. You can see the fuel cell filler mounted through the quarter window here also.

One change in the suspension is the custom lower control arms we are making. Because of the amount of steering angle we have, the wheel now hits the tension rod if placed in the normal ae86 position so we are making a custom "A" arm which will give us the clearance needed.

Next update will follow shortly and will give you guys a look at the awesome aero for this AE86. 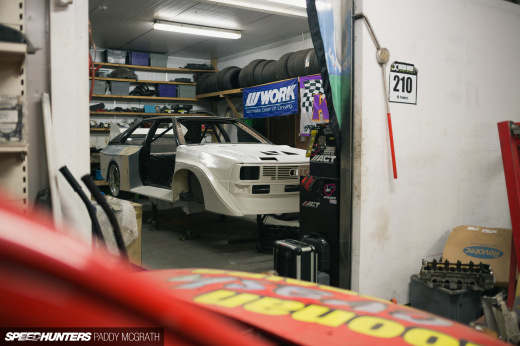 Im so sick of corolla's being hilighted. Seriously people get creative.

I just love this build, keep up the good work.

Finally coming together as a whole. Cant wait to see the aero and wheels mounted.

this as creative as it gets for an 86

hi please anyone knows i have 18 inch rims on my car and i want to buy new tiers if i made the rear tiers with big profile like 50 and front 40 would it made my handling better or worse ??

pls reply me on my email mallah656@hotmail.com

I hope they make enough one off parts for back up in case of an OUT COURSE incident. No hate intended, but thats a lot of custom work!

Keep it up guys, nice build!

I love how this car is turning out. Keep it up!

Where do you constantly see corollas being highlighted Anonymous?! Make a difference in this world, be creative and do a build thread if you think that's the case lol, shoot.

seems like its going to be a blast to drive.

you are going to be sick for another few decades id say cause they aint going anywhere in a hurry id say...!!

this is acutally inspireing me to buy an ae86 and actually get drifting !

lookin good.. [as expected] can't for a little more progress tho'..

It seems that it takes a season of drifting for a driver to get used to a new car, it will be interesting to see how Darren fares with this new rig. I have to ask, how on earth is he planning on competing with the V8 smoke machines?

You gotta love anonymous comments - a widebody, rotary powered, rear mount cooling car is no longer creative because it was once an AE86!

Beautiful fabrication and engineering going on here, I can't wait to see and hear this machine shred some tires.

hows someone gonna complain about this post??? perhaps your reading the wrong blog if you dont like this...

Rad. I'm feelin this. @ Anonymous: did you submit your car for Build Month? I doubt it

Drifting was cool back then when it first started. Then someone brought it (read, copy it) from Japan; and now every high school kids (aka, Self Proclaimed Engineers) build up those cars (as well as the S chassis), and it became the norm to have a slammed-hellaflush-hellaidiot flashy green car.

There seem to be not that many people these days that think with their own head. Everyone is copying everyone, and this make the scene very pathetic.

Looking great. I <3 Wiggins clamps too.

@ Rook.... As has been stated 1 million times this car is not and i repeat NOT competing in FD...

@ Anonymous.... The fact that you put your name down as anonymous sho's that you havent got a set of balls to stand up and speak without people knowing who you are....

@Alex.... Can you please show me this 'Drift' or even THESE 'Drift' cars that Darren is copying????

So therefore you FAil at living...

Getting super excited about this!

Hes not copying anything, theres more originality in this build then youll ever be capable of mustering up in your whole worthless lifetime. People buy and build s chassis because they are cheap, practical, and the most fun you can have on 4 wheels. Why try and build some piece of crap that was never meant to be thrown around on track into a drift car just to be different.

@Alex: I will half agree and half disagree. I will agree that everyone tends to copy off of everyone else (hello slammed v8-swapped s-chassis)... But you cant down high school kids for getting into drifting and throwing the same parts on their cars as their favorite drifting heros.

Im a junior in high school, and i drift my FC. But i dress up my car to my taste, not to the "norm" taste. SO, i just wouldnt bash high-schoolers.

noob question, but how do they take pictures that make everything look like a model????

Love this build, particulary the elegant piping paths. Anyone complaining that their sick of whatever spends too much time online and not enough time actually building or driving. If your so unique, show us your build...bet you dont have one.

how did u make the steering column?
and how can i get one like that

how did u make the steering column?
and how can i get one like that