Let's pick up from where we left off from Round 2 of the Rockstar Energy D1NZ National Drifting Championship with this shot of Kurt Holland securing 11th position during qualifying. Drivers had Day One to practice but now it was time to get down to business.

Rookie and Pro drivers attended the all-important track briefing early in the morning.

Here you can see the track layout at Manfield Raceway. Note the judged section running from before turn 2 to well after turn 5.

How nice is this view above pit lane? You can see turn 3 all the way to turn 5 in this shot. It wasn't long before the morning kicked off with D1 qualifying – so let's take a look at some of the drivers who made it through.

Unfortunately Jake Jones didn't make it into the Top 16.

Sky Zhao also didn't make the Top 16 but managed to do some pretty crazy entries into the hairpin!

Kurt Holland worked hard for his 11th spot in qualifying. 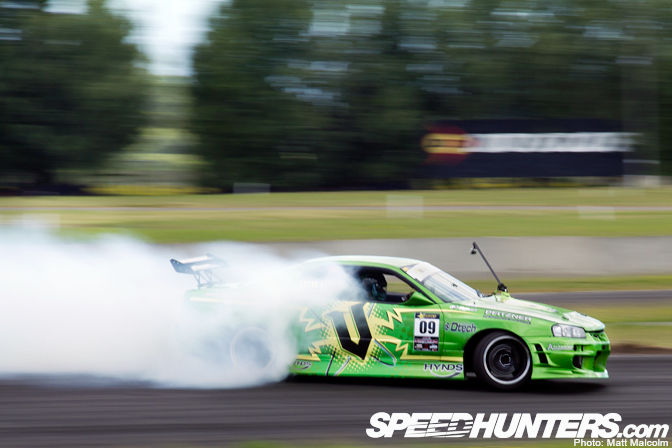 Cole Armstrong powered his way into 10th position in qualifying.

Mad Mike in his Mazda RX-7 qualified in a worthy 9th spot.

Fastest entry of the day went to Adam Richards in his A31 Cefiro who also picked up a nice 8th spot with Daynom Templeman scoring 7th position.

I was unsure if Gaz Whiter was going to be able to compete after his engine problems on Day One. However, he showed up after a frantic installation of a borrowed head the night before and laid down a solid run rewarding him with 5th place.

Paul Tomlin from the South Island also drove well and secured a very respectable 4th – check out the smoke from this S13!

Andrew Redward drove his S14 Silvia amazingly well in qualifying earning him the top spot. This was made all the more impressive by the fact the car he was piloting wasn't even his primary competition car… and to top it off he was driving with a broken thumb!

Moving on to the top 16 battles there was a huge upset, with Gary Tenana knocking out top qualifier Andrew Redward.

Adam Richards' speed and aggressive driving was too much for Mad Mike. Adam progressed to the top 8.

Gaz Whiter who was driving like an animal on a borrowed engine head defeated Aaron Bennett.

Adam Richards continued on his roll in the top 8, leaving Gary Tenana in his dust.

The battles kept coming as Curt Whittaker in his R34 defeated Josh Coote in his 180SX.

Cole Armstrong in his V powered R34 defeated Carl Ruiterman (above) to round out our top 4 drivers.

The battle for 3rd and 4th saw Adam Richards in his Cefiro come out on top to claim the bottom step on the podium.

The battle for 1st and 2nd heated up with Round 1 winner Curt Whittaker taking the lead.

Then, in a further twist to an already dramatic couple of days, Curt Whittaker was unable to complete his chase run after a belt snapped. He wasn't able to repair it within the five minute rule, handing Gaz Whiter the victory.

Victory burnouts on a borrowed engine – it doesn't get any better than that!

Curt Whittaker returns to the pits after some victory burnouts, no doubt happy with his day's effort.

Even after the competition had finished Mad Mike was still out there putting on a great show during the afternoon's expression session.

Check out Mad Mike as he switches down the front straight.

Well that's it for Round 2, here's a shot from our hotel with Carlos Walter's R33 Skyline dimly lit by the setting Palmerston North sun.

Bring on Round 3 of the Rockstar Energy D1NZ National Drifting Championship, which will be New Zealand's first night round!

hey matt, is there anywhere i can view your photos from the weekend?

Do you have any more from the rookies they were a bloody good show, want more of the drift inc sacked out R33, a tribute to Carlos for managing to pedal it at such a low height, the car is below optimum for drifting but looks so PHAT

Adam Richards a31 is badass!

Do you have any pics of the Black 'Drift Shop " R32/34 for the Rookies . The Ghosted paint on that car was mint .

This is the best D1NZ coverage there is! Keep it commin Matt! Hope you get to report on sum other NZ scenes in da future.

you guys take all these nice shots but no wallpapers :(. WALLPAPER 2nd last photo of mad mike please :D!!