After I got this tip from a friend, I packed my bags and punched an address into my navigation system and left for Belgium. My destination was The Mercedes House in the center of Brussels, the European capital. They had a special exhibition with several AMG models.

One of the first cars I laid my eyes on was this E63 AMG. This four door saloon is powered by a 6.3 liter V8. This naturaly aspirated engine has been developed by AMG and is the most powerful NA V8 production engine in the world.

The sleek lines and sharp edges make this the perfect Autobahn cruiser. The engine propels this car from 0 to 100km/h in 4.5 seconds and it doesn't stop until it reaches 250km/h. The car is capable of going faster but it has been electronically limited.

Downstairs was a brief history of AMG and they had this CLK DTM AMG. Only 100 of these cars were built in 2004. The car was built by HWA who are also responsible for the CLK-GTR. The driving force behind HWA is Hans Werner Aufrecht, the A in AMG.

The car is powered by a supercharged V8 that is capable of 582bhp at 6100rpm and has an incredible 800Nm at 3500rpm. Within four seconds you are at 100km/h thanks to the AMG Speedshift five speed automatic gearbox. The top speed lies at 300km/h.

The exterior has a lot of carbon parts like this spoiler and the rear diffusor. The doors were closed so I don't have interior shots.

This is the SL63 AMG, like the name implies it is powered by the 6.3 liter V8. It is a true roadster with all the luxuries you could wish for. With the top down you can enjoy the amazing soundtrackof that V8.

Behind the AMG wheels are the 360mm ventilated rotors with six piston calipers. The SL is equipped with a race start function that ensures the car has maximum traction and acceleration off the line.

There was a wall with several die cast models including this 300 SEL 6.8 AMG that competed in the 24hrs of Spa Francorchamps. This car is a true icon and is one of the cars that made AMG famous.

Another section featured these CLK GTR's

I also spotted this picture of the 1980 450 SLC AMG, but more on that car in another feature. Could anybody identify the circuit it's racing on?

I really like the frontend design but I'm not really fond of the rear. The gullwing doors are a nice touch which links back to the 300SL.

Right at the entrance was this Formula 1 safety car; the driver for this car was Bernd Mayländer, a DTM veteran.

Imagine driving this at every Formula 1 race on some of the greatest circuits around the world !

This A class is something special but I will save this for later in the month. Does anybody already have an idea why this car is so special?

The Toyota Workhorse With An AMG Heart 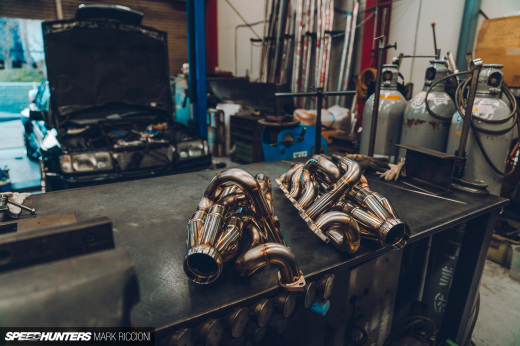 that a class is twin engined

Nice stuff, I really like the CLK DTM! Any chances to see older AMG cars?

Correction, each of those V8s is actually a 6.2L V8 engine. Mercedes sort of cheated with the badge, which relates to a much older car, the 300SEL 6.3. A car that was the original Mercedes super saloon.

The circuit is in France and now used as a public road. Abandoned piece of history. Called - .....

Let's see. If I remember correctly, it had a rather large 6 or 8-cylinder shoved into the back of it.

I remember that A class. It's supposedly has around 270hp and is supposedly aiming for the Ford Focus RS, Audi S3 and BMW 1 Series. For more obviousness check out the massive brakes on the front...I'm not sure if they still plan on making it or not.

The Track must be somewhere in Germany, because the advertisment is all in german.

And the special thing about the A-class... let me guess, i think its the "AMG experience"-sticker on the drivers-door

Why they have an A Class AMG!, is so stupid

Mdawson, i am so with you on the cheating part, they are all 6.2l, but even on the official site of AMG they have written that the engine is 6.3l on the E63... Are they taking the lie even further or have they finally made the engine bigger as the badge would suggest?..

I think I know why that A-Class is special. If I'm correct, it's a one-off built by AMG quite a few years ago for a customer and has a 5.5L V8 wedged into its engine bay.

yep, the first guy is correct.

It's a twin engined A class built about 10 years ago or so. AMG built three I think - AMG have one, I believe Mika Hakkinen has one and the third is sitting in the Linday Fox Museum in docklands, Melbourne.

some real wonders in this post.. love the SL63 AMG - very powerful

As per the discussion of the 1980 race track:

1 - it's not Reims-Gueux, did you even google image search that before posting?

2 - it's not in france, although it is used as a public road now

AMG/Mercedes aren't the only ones who cheat on their badges. For example BMW, the 335i, or the 523/525 all have smaller engines.

@Joe: You probably don't live in Europe. The A-Class is on the market for about 11 years now. The new model will be released in 2013 in will be more of a hatch (or what they call "shooting break") than a van.

there is no A class amg, its just an A class with bumper kit and amg rims. it used to be painted with mclaren team colours

the A class is twin engined and 4wd isnt it? they made them for mika hakkinen and david coulthard one season i think?

The A-class in twin engined.

I think that's the Nurburgring.

It's a A38 AMG. It has two engines and four wheel drive.

No mention of the CLR???

More about that A38

Sorry its german but google translator should help.

plus AMG making another A-class AMG.

Most powerfull NA v8? what about the 458 Italia?