Lets start with part two of the My Car Show coverage. It was really cool to see that the show floor had cars from all ages and a lot of them were presented right next to each other. In this opening shot you can see a perfect example of this, two rivals from different ages, a traditionally built Golf MKI right next to a widebody Opel Astra with all the speakers it can handle.

This has to be the coolest Audi 80 I have ever laid my eyes on. I never thought I would say that because in my eyes it is on my list of the least desirable cars in the Audi range.

This car was a true beast, just waiting for another trackday. Even standing still it looked like it was going fast. A true SLR McLaren 722 GT that had been brought in from the Ascari Race Resort.

Maybe not as fast or powerful as the SLR but I'm sure it is a lot of fun to drive this on your local trackday.

One of only a few Imports I saw at the show.

It doesn't get any lower than this, although I'm not sure how this will affect the driving capabilities of this BMW M3.

Airbags are a popular method to get a spectacular drop that sometimes isn't possible with coilovers.

One of the best looking bodykits for the R8 is made by Rieger. Although it's technically not a bodykit but add-ons to the existing bumpers.

Although this is the V8 model, Rieger made a bumper that resembles the V10 version.

This Civic reminded me of one of my first cars. It had some ‘simple' modifications but with maximum result. 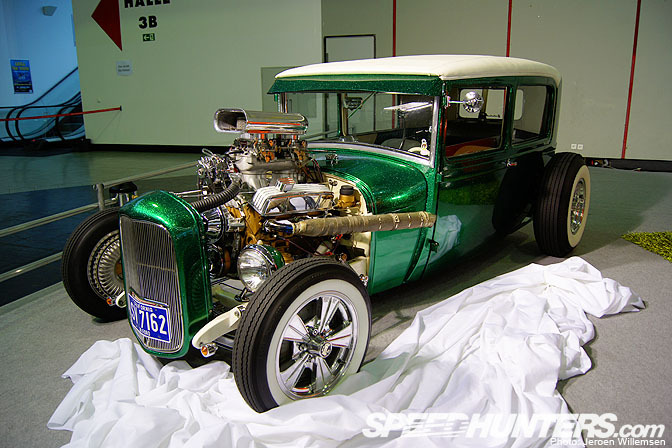 There was a row of these old school Hotrods. This Ford was the one that caught my eye.

This cool little Mito featured a bodykit and a cool set of wheels. I really liked the white details around the rear lights.

The Porsche Panamera is a love or hate car. If I had one I would take it to Speedart and let them work their magic on the car to make it a real autobahn cruiser.

American imports like the Chevrolet Camaro are really popular amongst the Germans. This version dubbed the Black Bee was on a set of huge 20" Schmidt Rhino wheels.

Get ready for some spotlights on several of the cars that made a lasting impression.

the others are too euro-rice or of questionable taste IMHO.

I think that Panamera is the first to not mame my eyes, not bad.

that red scirocco is mad!!! LIFE DONT GET MUCH LOWER THAT THIS

but that s15 was beasting with that track aero

Although BBS RS's are way over played, that Audi looks stunning! And the tail lights on the Mk1 Golf are sick! They almost look like a lollipop red, anybody know how to get that effect?

Not sure if it is really M3. Looks more like M-paket to me.

This makes me realize I am not into this these types of shows anymore. And I am glad.

like the civic a lot, clean and different. the color scheme just has to be inspired by the original carrera RS.

the Civic with Venoms(?) looking nice.. one of the best looking Porsche Panamera's i've seen, not much to look at in std. form. - and just for the record we need a pic of the 'Rocco with the 'airbags outside' you know the Red one.. - can't believe you don't like the Audi 80, one of the few cars from Audi that has stood the 'test of time??!!' - come on they 'still look good' when they "look good!!" - thanks for quality pics & coverage..

Wallpaper of the Audi 80, please!

Man, Maybe I should put the BBS RS's back on my Beamer. And the color was mehh but SLR was pretty sweet.. think I'd like to see a little something done on that.

Nice coverage and did you guys notice the nice booty next to the S15?

So many cars, so little taste...

this has got to be the best car show ever!!!

yeah that white BMW isn't an M3...obvious reason being that it has the 4 door headlights, whereas the 4 door M3 has the coupe front end.

The green Golf 1 is from Luxembourg. A real stunner!

The green Golf 1 is from Luxembourg. A real stunner!

Things got decidedly boring after that 2002. Didn't realise that Bilstein made airbags for passenger vehicles though.

When I entered the showgrounds at the Midwinter meeting I was pretty surprised to see this Audi 80. I