October is always the busiest month of the year for car events in Japan, and one of the most aesthetically pleasing of these has to be La Festa Mille Miglia. Started in 1997, 'La Festa' pays homage to what is probably the most famous road rally in the world, the Mille Miglia ,which ran 24 times between 1927 and 1957. The event was resurrected in 1982 as the Mille Miglia Storica (historic), and draws a lot of attention plus a bumper entry every May in Brescia. La Festa Mille Miglia, like its Italian namesake, is a one-thousand mile trek run over four days. Above, this 1955 Ferrari 750 Monza really epitomises the event and took my breath away.

Featuring machines from the '20s through to 1967 (again, in accordance with the Mille Miglia Storica), the quality of the cars is unsurpassed. From this year's lineup of 106 participating machines, there must have been two dozen worth well in excess of a million dollars. The 1927 Bugatti T35C above is obviously one of them. As in years past, the head of the field once again saw a brace of five Bugatti, with other '20s giants such as Rolls Royce Phantom and 6 1/2 litre Bentley next on the entry list.

Here's one of no fewer than six pre-war Fiat Balillia 508s. This example is from 1936. Cute, but rather delicate looking; not sure I could endure a thousand miles (1600kms) in one.

And the competitors take the event very seriously – a good thing in my opinion. These two guys fielded a 1959 Austin Healey 3000 BT7 and really looked the part.

Another British classic, this beauty is a 1957 AC ACE. For all Cobra lovers out there, this car was the original inspiration for Carroll Shelby's giant-killing machines of the mid '60s and beyond.

1954 Austin Healey 100/4 looking superb in this colour. One of three that contested the event.

And while the venue, the grounds at Meiji Jingu shrine in central Tokyo, was impressive, the rain was something of a let-down. 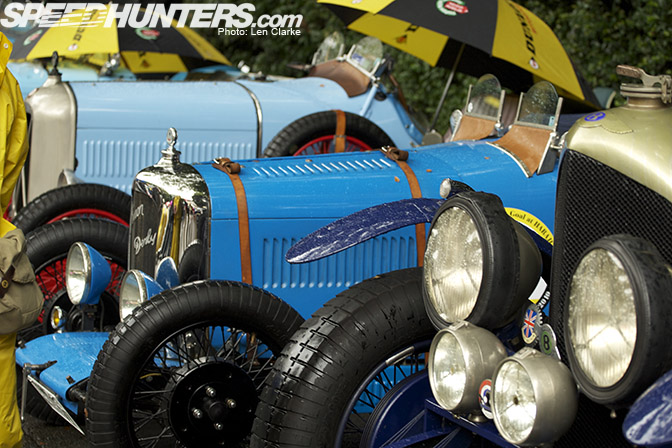 This 1925 Rolls Royce Phantom Torpedo Tourer (cool name or what!) was the largest vehicle there, and looked appropriately imposing.

The event also features some very interesting characters. Historic rallying is very a popular pastime among the super-rich in Japan, and La Festa is just the crowning event from what is a busy season with many events. There are even competing organisers.

Some incredible Italian names; Bandini, Siata, Osca, Maserati, Moretti, Morassutti, Fiat, Alfa Romeo, Ferrari – and those are just from the 1950s entries.  There were also examples from Stanguellini and Cisitalia, though the ones on hand were built in the forties.

One of the rarest cars at the event, a 1955 DKW Sonderklasse. In 1932, Audi merged with Horch, DKW, and Wanderer to form Auto Union.

More fifties beauties, the 1957 Porsche 356A Speedster in the foreground sits next to an MGA from the same era, with a Jaguar XK120 in the background.

The Centenary sticker celebrating 100 years of Alfa Romeo was on a car from the half-way point of that illustrious history, a 1959 Giuletta Sprint Veloce.

300SL. Just the name evokes so many images. There were three examples at this year's La Festa, though only one was a gullwing. And this guy's left his keys in the boot.

Jaguar XK150 detail. The leather, the cat, the buckle and the (almost) BRG (British Racing Green) paint, not to mention the rain drops, make this a little slice of Coventry.

No doubt one of the greatest marques ever, this is a detail of Jaguar's first car, the incomparable SS100 from 1936. Judging by the Targa Tasmania emblem, this example has seen a bit of the world!

Back to the inter-war years and an instantly-recognisable four-leaf clover on the bonnet. This Alfa Romeo 6C 2300 Spyder Corsa must have been quite a sight to behold when it came out back in 1924.

In the thirties, MG was synonymous not only with racing, but with success in motorsport. You're looking at an N Type Magnette from 1935.

A major part of the thrill of shooting events such as this is the sheer beauty of the designs. This is one of a pair of Porsche 550 RS that took part. Timeless.

Best hood ornament of the meet? A sphinx certainly catches the eye. The car is a 1959 Armstrong Siddeley Star Sapphaire, a company noted for building aircraft quality vehicles. Alas, Jaguars targeted the same audience and were vastly cheaper.

Participants getting ready to head off. The gentleman on the right is a stalwart of the historic rallying scene, and on this occasion was piloting a 1934 Singer 9 Le Mans.

"Oh no, I've left my maps at home!" Every navigator's worst nightmare.

First to depart was the 1927 Bugatti T35C seen earlier.

This 1928 Bentley was really impressive – and loud!

Driving a 1948 Maserati A6 GCS, Japanese TV personality Masaaki Sakai was the biggest among a number of celebrities taking part.

Under the trees Speedsters look phenomenal in my opinion.

One of the pair of Porsche 550 RS on the event. James Dean sure had good taste in cars, too bad he died in one of these.

Here's the Ferrari 750 Monza from the opening picture, its occupants well wrapped up against the rain.

And finally, another of the Austin Healeys that participated. This example is a 100/4 BN2 from 1955, and the driver and navigator are brothers.

So despite the inclement weather, it was a feast of car eye candy, and makes one think about the machines the manufacturers pump out today. More comfortable and faster to be sure, but without the charm and beauty of the cars from yesteryear.

That DKW is interesting..

"More comfortable and faster to be sure, but without the charm and beauty of the cars from yesteryear."

This is a statement against which, no lawyer the world over can argue.

It's the little things isn't it, Len? The things that many so called "professionals" who profess to "know", would actually gloss over; simple things like the fact the Porsche and Jaguar were strapped down by a strip of leather...

great read.. pity about the rain.

If I were there and saw that SL with the keys in the trunk, I probably would've stolen it.

No mention of the silver 356 next to the ACE

great article len just as good as your super taikyu. Can we have wallpapers of both pictures of the ferrari 750 monza please.

In spring, the original mille miglia will pass near where i live... ( in fiesole near florence ) ... it's realy spectacular, but the best thing about it it's that the police let you drive like a mad man if you follow the historical car... the race it's only a historical reenactment but some drivers take it very seriously!! it realy means a lot to me. maybe one of the only things that make me proud of being italian...

all the speed hunters fans are invited to my place!!

I want a Healey.

Breathtaking vehicles. Must be nice I tell ya.

more positive camber than your body has room for

I'm changing my mind about FR Sedan month and am leaning towards an idea of classic European month. These are truly "beautiful" cars. Stupid kids drool over modern Lambos, Ferraris, and Bugattis. But these, these just ooze class. You can't help but appreciate such wonderful pieces of history. Great read. Oh, and I love the people in this event, it's great to see people out there who go the extra mile to dress the part for such an event, I got a kick out of it.

Classic cars sure are beautfiul. It's a shame most cars are so crappy looking nowadays.

Very cool! It's awesome to see that these timeless creations are preserved and enjoyed around the world. Do you have more pics from this event?

please more info on the car behind the DKW

pics of the alfa 8c, desktop of "slice of Convetry"