As I sit in a petrol station-come-hotel in northern Spain the day before the next FIA GT1 round, finally I've been able to finish off this race report post wrapping up the last two races of the 2010 European GT3 Championship from Zolder in Belgium. It was a weekend that showed off the best of GT3, with close racing and action a-plenty. With the Drivers' Title already in the hands of the Keilwitz/Hohenadel #101 Callaway Corvette, it was down to the Prospeed Porsche team to try and wrest the Teams' crown from Callaway. They should have won the first race, and at 5pm on the Sunday it looked like they *had* won the second…

Of course, for Speedhunters the crowning glory was the phoenix win of the #76 BMW Z4 Coupé of Patrick Soderlund and Edward Sandstrom in the first race. This year they've been getting better and better at each round; Patrick particularly, as the 'amateur' driver in this Pro-Am series, has massively improved. Edward is fullsome in his praise of just how much he's come on this year. Next year is already in the planning stages, and there are some exciting prospects for the pair.

It was interesting to read some of the comments on my earlier Zolder stories: I certainly am in the camp where I get excited no matter how many times I've been to the same track. I would be more than happy for Zolder to be my local one!

WIth it's testing chicanes, Zolder pushed the drivers to the limit – and beyond. Forget circuit racing, at Zolder we had GT3-style drifting and rallycross as well!

The weekend might have ended well, but Patrick's massive off in Saturday afternoon's Qualifying had obviously shaken him up. On Sunday morning he was visibly subdued. They were starting sixth with the time Patrick set before the accident, and the team had worked through the night to stick the car back together, but despite the optimism surely they weren't really expecting anything but a solid points result at the most?

From the hot rolling start Patrick in #76 dropped a place, and the top six edged out a small gap. But not for long… Patrick seemed to come alive and began reeling in the leading half dozen. By the pit-stops, 25 minutes in, he was right on their tail.

It was the perfect first stint from Patrick. Edward waited in the pits for the stop, pacing between the two BMW garages.

As I waited for the stop, there was a crunching sound from further up the pit-lane. Towards the top of the pits there had been a collision between the outgoing #101 Corvette and the incoming #6 Sainteloc Audi – luckily only causing superficial damage. It once again showed the dangers of working in a pit-lane, and from battling for second the #101 dropped to sixth.

The Ferraris dismal weekend continuedL M-Tech's 430 only lasts four laps and the other Chad car managed just 11 before retiring.

The Russian drivers in the rumbling BMW-powered Ascari were putting on a good show, but not delivering the good times…

The leading #98 Marc VDS Ford GT had eked out tenths of a second each lap for the first dozen laps, but stayed out until the last moments that the pit window was open. It was a real mistake, as you could see him losing time hand over fist as he came up to lapped cars who had already stopped. He emerged in the lead, but the #3 Rosberg Audi and #61 Prospeed Porsche were bearing down fast.

Stephane Lemeret and Kenneth Heyer in #3 had kept in touch with the Ford, but were soon taken by the flying #61.Hopes of a strong finish for the Rosberg squad then evaporated as first Heyer looped the car at the final chicane on lap 25 and then again later in the race. He'd finish near the back in the middle of a gaggle of other Audis.

As #98 and #3 dropped back, so #76 came forward, with Edward absolutely on it! Fourth to ninth positions were nose to tail as well, with the #77 BMW right in the thick of it. The lead battle seemed like it was coming down to a straight fight between the #61 Prospeed and #11 Muehlner 911s. But no! With just 11 minutes to go the two cars came together right in front of me on the main straight after the #61 car blocked a dive by the #11: both lazily looped into the gravel.They somehow struggled back onto the track, but both sported damage.

Edward hunted down the pair of crippled Porsches:  #61 was dropping water from a broken radiator and the #11's front end was rubbing on the tyres. Surely a podium was guaranteed? But third wasn't enough! Edward pushed on and took #61 with just five minutes to go. Second! As I stood on the inside of the first corner I had that sudden feeling of panic about getting back for the podium! This was looking good! And with just three minutes to go #11 slowed to a crawl at the end of the lap and dropped down the order like a stone.

With three minutes to go Edward didn't stop pushing – by the flag he was nine seconds to the good. Despite a car that the day before had looked like a write-off and with no time to bed in a set-up, he crossed the line for an emotional victory. After losing second in the Algrave with just two laps to the team were holding their collective breath right up until the flag fell and Edward's Z4 growled across the line. This was a very happy team.

Claudia Huertgen had also been scything through the field: she took fourth, in a fantastic double-result for Team NFS. Another lap and she would have made the podium for sure!

There was local support for the FIA GT3 races (or perhaps the other way round if you're Belgian), provided by the impressive Belgian Touring Car Series and veteran Belcar championship. I recognised some of the teams and cars from the Dubai 24 Hours we Speedhunted at the beginning of the year, such as this Sunred Seat Leon.

The BTCS was a strange but great mix of cars: firstly a batch of modded Clios, Toyotas and Hondas came out, three-wheeling round the track.

But then these fire-breathing silhouette racers appeared! This is not the kind of Kia I'm used to seeing.

The fastest Volvo S60 out there perhaps? 'Out there' being the appropriate term.

Even the Megane Trophy cars don't look as tricked up as these things. Amazing!

The Belcar series is a shadow of its former self, when it used to sport more GT1 cars than the official FIA GT1 series, but it still shows off  big and varied grids. GT3 cars now head the field, with a set of teams that are often seen out in the FIA series as well.

Prospeed made up for their FIA GT3 disappointment with a 1-3 in the 2-hour Belcar race. They had a pair of 911s in both series, making a smart quartet in the garage.

Sunday also saw a parade of local exotica, which was parked up at various points around the circuit waiting for their chance to go out on track. Corvettes seem to be particularly popular in the low countries. But it wasn't just for new cars: even a couple of old Ford Capris were out on show! Ah, nostalgia!

But of course I always have to show my Alfa love: this GT 1300 Junior stood out from the modern shopping wagons it was parked next to.

It was a long walk for Patrick to get to the car at the start of the second GT3 race: Edward would start #76 from the back of the grid. Here Patrick had another seven rows to walk past…

This time I hunkered down on the inside of the first corner: once again the screaming pack were accompanied by flying debris bouncing off my thankfully thick head.

Edward's first stint was truly a pleasure to watch. He was like a terrier! I kept forgetting to take pictures as I was laughing so much watching him attack car after car, lap after lap. But his efforts were rewarded: by the pit-stops he was nipping at the top ten. Excellent entertainment!

The #17 Graff Corvette was displaying impressive glowing disks into the second chicane, showing just how much effort he was putting in.

At the next apex it was obvious why he was braking so hard. Ah. Oops.

#77 had been in the top 10 since the start, but soon had the sister car behind: they scrapped over sixth towards the end of the race, with Csaba Walter in #77  just holding on.

The fine result in the first race seemed like a distant memory for the #98 Ford GT: they finished the second race well down in 18th, battle-scarred after suffering from starting right down the order after a bad qualifying session.

Up front when the flag dropped was a local interloper: the #27 WRT Belgian Audi Club R8 LMS. The young driver who brought the car home third had the appropriately racy name of Enzo Ide. You can tell what his parents were fans of! It was a dream result for him and his co-driver, but it wasn't to last…

Finishing second to the #61 Prospeed Porsche was the #1 Aston Martin, finally putting in a good result after a year of bad luck and unreliability. Champagne sprayed and the drivers took their trophies – and Prospeed the Teams Championship. But, once again post-race scrutineering checks would be cars' undoing: both the Porsche and Audi were disqualified, handing the win to the Aston and the Teams' trophy to Callaway. Even worse for Prospeed, their disqualification promoted Team NFS's BMWs to second and fourth in the race – and therefore second in the Teams' Championship. An amazing result for Team NFS in their first year in GT3 – and many congratulations to Schubert Motorsport, who have expertly prepped the Z4s this year.

So, another season over for GT3, and what a season it's been. My only regret? Not buying this t-shirt. The perfect sentiment. 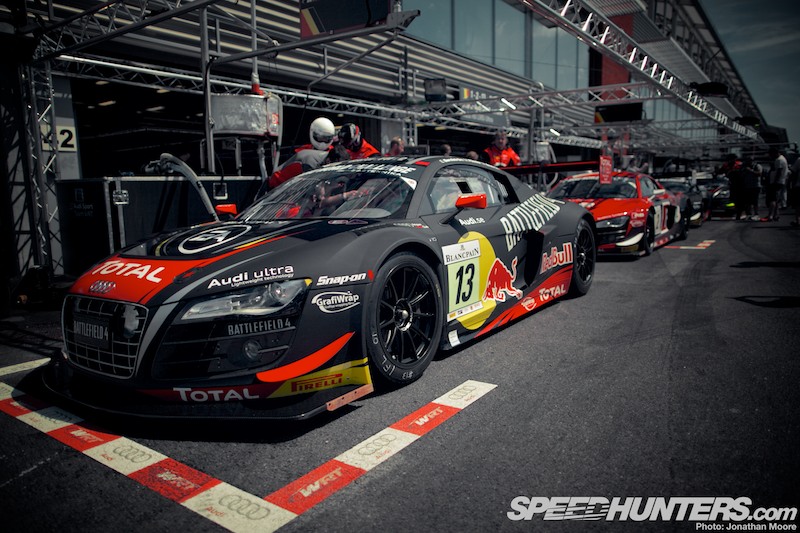 Great report! I responded to the previous article because Circuit Zolder hasn't always treated it's spectators in a decent way. That took away some of the exitement so I got a bit disappointed. But that won't keep me from going there every couple of weeks ;-).

keep up the great work

Speedhunters, THANK YOU for re-introducing me to GT racing, and I have thoroughly enjoyed following Team Need For Speed the entire time. Best of luck next year!

Zolder is great little track for racing. No matter which class is visiting.

@Jonathan, Give Wendy from Speedwear a call or drop an email for the tee.