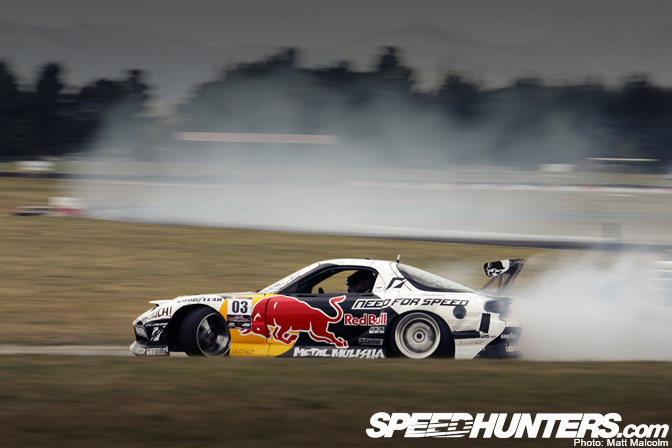 Day two of the Rockstar Energy Drink National Drifting Championship kicked off with a frantic morning practice session. With all of New Zealand's top drifters from around the country putting their game faces on, it was time to get down to business.

During the morning drivers briefing the D1NZ officials explained the clipping points, judged section and the all important safety flag rules.

Check out Gene Rhodes backwards entry during the morning's practice session. These South Island boys are mad and were really going for it – there's no holding back – even in practice!

Australian Jake Jones was back out on track after oil supply problems plagued his Nissan Silvia the previous day. He drove consistently even though he didn't get much seat time on the first day.

It wasn't long before we were into qualifying and local driver Simon Uquart was showing the higher horsepower boys how it was done. Driving hard he earned himself 11th place.

Check out the elevated judges booth. This gives the officials a clear and uninterrupted view of the track… and even a little space to enjoy some mid-day sun!

Walking back through the grid I spotted Jake Jones' S13 Silvia sitting idle… let's take a look inside shall we?

Check out that crazy steering wheel!

Inside the judges booth I stole a glance at the qualifying scores.

Moving onto the Top 16 battles we had Australian Josh Coote against D1NZ veteran Gee Mutch. Gee Mutch was getting huge angle all throughout qualifying but Josh grabbed the win thanks to his solid driving, proceeding through to the top 8.

Chris Protheroe fought well against Mad Mike in the battle for the Top 8 but Mad Mike's RX-7 was too much to handle for the S14.

In the Top 8 Gaz Whiter dove down the inside of Mad Mike. Mike managed to fend off an almost relentless attack, moving on to the Top 4.

The Top 4 battle between Mad Mike and Carl Ruiterman was, simply put, epic. Carl Ruiterman beat Mike by a very narrow margin and moved on to the final battle.

The battle for 3rd and 4th was on. Cole Armstrong in the R34 lined up against Mad Mike. This was always going to be a good battle that would go right down to the line. On Mike's chase run he spun, handing Cole Armstrong 3rd place overall.

The final battle. Carl Ruiterman in his S14 Silvia versus Curt Whittaker in his R34 Skyline. A near perfect chase from both drivers forced the judges to call a one more time, the pressure was on and the crowd went crazy one more time!

Both drivers drove superbly on their second runs. Carl Ruiterman's speed was simply unreal and Curt Whittaker's angle almost seemed to defy physics. But there had to be one winner, and by a very slight margin Curt Whittaker took out Round 1 of the Rockstar Energy National Drifting Championship.

The top 4 cars lined up for driver interviews on TV as well as media photos.

Mad Mike drove well to secure place and 270 points to kickstart his season.

Four car tandem victory doughnuts, it doesn't get any better than this!

Awesome to see some great pictures and a full report, well done guys and bring on round 2.

was a sick day

I think I have to build a RX7 Replica to

video of the donut fun:

Awesome work Matt, have to say the D1NZ series is so awesome to be in its crazy... Cant wait for Round 2! See you all back in NZ ina few weeks

Nice to see Mad Mike back with RX-7

Whaaawi love the green skyline and the sylvia pic 3 any wallpapers? Amazing cars.

was that last name a joke?

OOOOOHH YESS!! the screaming 26b powered rx7 is back!

victory skids from taken by me on the track

Sweet pics matt . For round two can , from the top 16 on ,have there own piece and have pics of each battle . Plus maybe facts about the cars Like that 1st place Curt Whittkers /WSR -r34 has a 2jz-gte under the hood , 2nd place Carl Ruiterman has a Sr22det ,3rd place Cole Armstrongs /V energy -R34 has a rb30det or that top placed local driver (6th) Cody Collis /The Drift Shop -A31 cefie is running 650rwhp rb30det . Can we have more pics of the rookies .

Nice article, thanks for the information.

Thats me in Pic 3 in the S15, I would love to have a desktop/wallpaper of that.... that is a mean shot!! I do try to back it in to that corner and use the throttle or forward grip of the car to slow it down by putting it in back first

MIKE! GOOD JOB man! Good to see you in your homeland!!

we gotta catch up agian!