What I know about Drag racing you could easily write on the back of a postage stamp. My last experience of the 'strip' saw Radio One DJ Dave Lee-Travis piloting 'The Needle' at Santa Pod Raceway sometime in the late 70s. An expert I am not! So my idea of enormous engined pointy nosed monsters was blown away when I discovered the HKS Drag Series with it's front wheel drive class. A front wheel drive car … on a drag strip … huh, what's the point in that I thought. A meeting with Ray from RMS Jap-Works and a good look around his Civic opened my eyes to FWD drag racing.

What we see here is RMS Jap-Works first foray into the world of drag racing. It is being built to run in the 2011 HKS Drag series and at present is 90% ready to roll.

Big fat slicks sitting on V2 comp magnesium rims. Like a lot of this car, the wheels are not available in the UK and had to be ordered especially from America. The rear wheels were still somewhere over the Atlantic as we met up for the shoot.

The 1.8 litre Intergra R block was sent over to Golden Eagle in San Dimas, California to be sleeved from 81mm to 88mm. Then assembled closer to home by HTS Brands Hatch, with ported and polished head and uprated cams.

The final addition to the power plant is a T78 Greddy turbocharger protruding through the bonnet, Ray estimates 450 to 500 HP will be put through a standard Integra gearbox with uprated driveshafts.

The much needed extra strengthening and bracing was all fabricated by RMS Jap-Works, as was the tiny alloy fuel tank in the top right of the engine bay. Fueling and sparks are all controlled through a Hondata S300 ECU again all sourced from across the pond.

Rumour has it that JEEP is an acronym for 'Just Enough Essential Parts'. An ethos that has been applied to the interior of the RMS Civic. Extensive weight saving has been carried out, even down to the trick carbon fibre nitrous bottle delivering a 25HP shot at the flick of a switch.

It's certainly going to be an interesting 2011 for RMS entering the relatively unknown world of drag racing. The car should be capable of achieving ten second 1/4's and this is Ray's bench mark time … to start with. From the little I know about drag racing Im sure the tenths will tumble as the drag racing bug takes hold.

what a power house.. it beggars belief that.. that kind of power can through that engine block.. wow - got any times for this one??

digging the spares in the back and the flocked dash

First and thsi car is too

Not saying it won't be fast, but it sure looks like a hack job.

Apart from the engine internals, hardly anything has been done to the motor. Stock intake manifold, stock ignition, stock cam gears, cheapo fuel pressure reg, and that's just what I can see in the photos. Why did they even put the turbo through the hood? There's plenty of room to put it down low with the intake facing forwards.

Then there's a rear diffuser which looks pointless due the car being high up and not flat on the bottom, and plenty of holes in the front bumper for extra drag.

Good luck to them 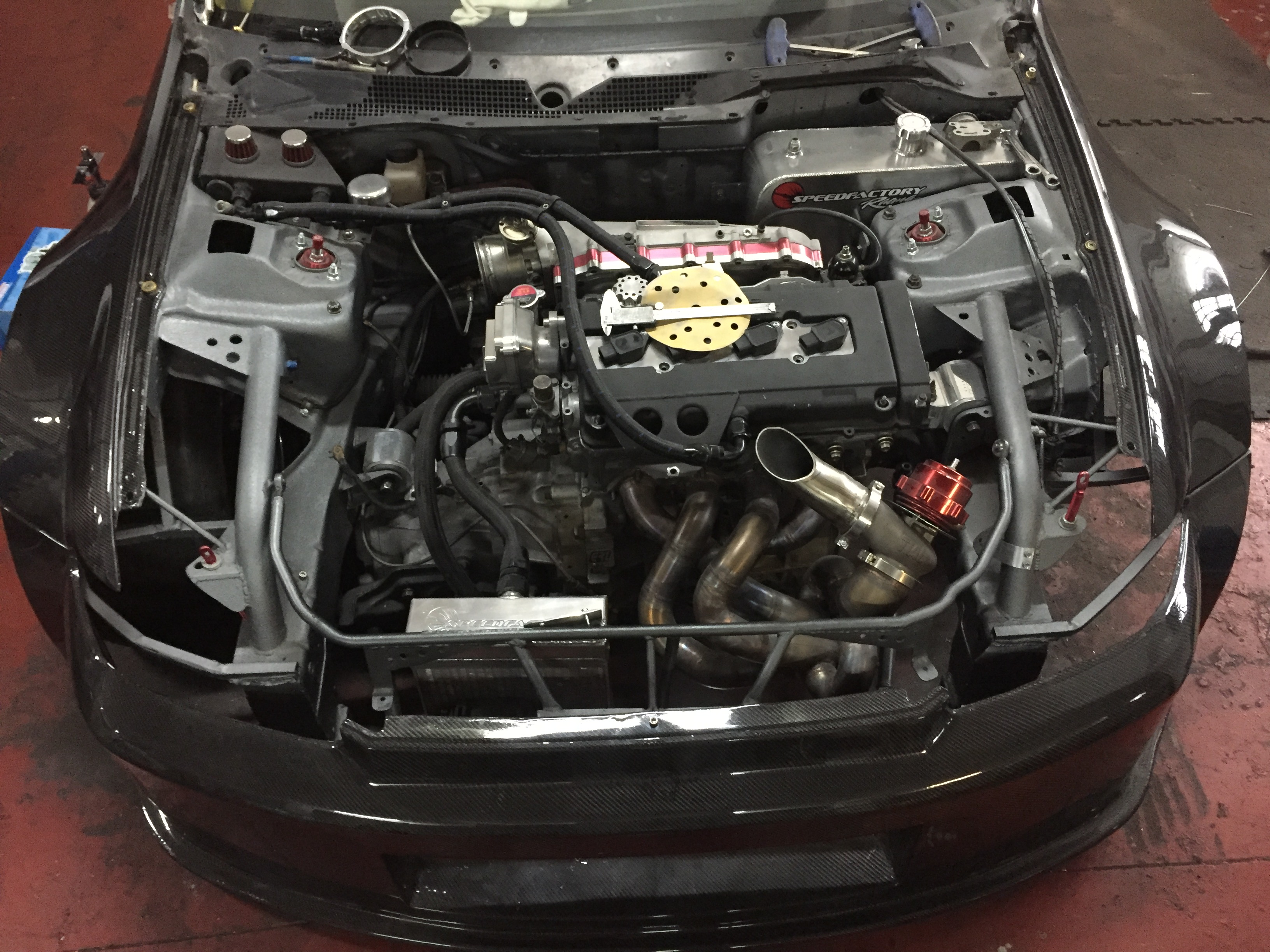 look at the skinnys on the EG, its fuccing stellies lol

for zerogoki. like it says in the write up 90% finished this is a mock up engine cams .pulleys ect are on the other engine.

when i heard the block was sleeved in san dimas. i immediately thought of bill and teds excellent adventure

haha space savers on the rear!

I hope this is NOT the best example of a nice fast Honda Civic Dragcar that can be found. This car will be a few seconds behind even street cars that can be found in america they are set up WAY better and look better as well. I expect more and better from Speedhunters.

randall your so full of s..t americans this americans that .at least these guys are trying and i think there gonna get there times there looking for . just a bit of time and pain but there get there.

Must've been tricky cutting the bonnet like that for the turbo...

Here in Puerto Rico we have a bunch of FWD civics that go very often to the race track, in fact my cousin built a CRX with an Integra R engine just like the one this Civic has with about 1000+ hp, it used a G-Force transmission and ran 9.0

Diggin the Arizona flag on the bottom left of the rear window.

why not read it first before making comments. i can c its a on going build .good luck guys.

Zerogoki,,, you haven't a clue, do you? Neither does the guy who fielded that car - I'm pretty sure you'd get along famously. Regardless, I'll dissect what you don't know before launching into the car.

1) the engine internals. The only thing mentioned with regards to internals is a GE sleeved block, bored to 88mm at which point there is no cylinder wall between bores. 86.5mm bores have headgasket problems when NA, nothing there to seat with boost.

3) Stock ignition is known good to 500 whp, with fresh coil and OEM wires. You do not pick up power from an upgrade if it is not misfiring.

4) Stock cam gears. It's been common knowledge for over a decade that you can shape a turbo B-series power band by adjusting cam gears, but it doesn't go any faster on the track. Save the adjustable gears for the NA cars, or an engine family that needs them when boosted like the D series.

5) Turbo through the hood applies downforce on the nose, and ram air effect doesn't matter a whole lot when all of the compressor isn't being used. Personally, I'd rather run an exhaust as being able to hear the slicks gripping on the track > being a ricer.

6) The diffuser works and the car isn't particularly high - do you know how rear ride height affects 60'? Have you seen this vehicle in dynamic operation when weight transfers rearward? I didn't think so. As for the holes in the front end, uhm, how else are you getting air to the radiator when the IC blocks the entirety of the grill? Two out of three turbo EH/EG chassis have cooling issues due to that problem.

As for the car, it looks like a ten second car. They spent money in the wrong places, but it's obviously functional and if they stick with it things will change in time to be competitive - not everyone is born thinking they know everything when they don't like Zerogoki, quite a lot of people put themselves out there and actually DO something and then LEARN from it.

That AEBS manifold is a Type-R clone so they got nothing from swapping out the stock IM. Upgraded cams when GSR/ITR are perfect until 600+ whp is a waste, not to mention there are a few brands of snake oil cams out there. That said, it's a simple setup without a bunch of clutter, and setups like that simply run. Might not be perfect, isn't what I'd build after tuning them for a decade, but it's better than 99% of the Hondas that are brought to me.

If the RMS guys want to check out the website I'm from, it's a bunch of bluecollar DIYers who've run tens off of $1000 budgets using fluxcore welds and diesel truck turbos. Bit of a rude environment, and sometimes they miss the point of spending smart money to make your life easier, but they pair things down to brass tacks essentials that can't be understood by magazine reading fanboys who know exactly what parts it takes to go fast because although they've never done it they read it on a forum.

Can anyone explain the part of "sleeved from 81mm to 88mm", please? I thought Honda B engines were closed-deck designs, but do they also use sleeves? The piston bore was increased 7mm? I can't understand it.

You seem like you have read way too many articles written by inexperienced people. You come across as the type that only goes to a drag strip on "run what you brung" night, and have no clue how to set up a car that optimally traverses the 1320. How many passes have you made in your life? What's your fastest pass? What's your best street tire 60' ? How many cars have you built to handle drag or dual duty street /strip? I would hazard a guess that you drive a mildy modded n/a 4cyl, and never been faster that 14's. I would guess that you have no clue to the dynamics of chassis and suspension design and setup as well. How well versed are you on you aero principles? How many books have you read (books, not 3 page articles in SCC) dealing with aerodynamics? How many times have you been able to apply anything you've learned AT ALL to a car, other than bolting on an eBay cold air intake?

Basically before criticizing, and failing massively at it, maybe you should cite some credentials. What certifies you to make the (dumb) critiques? You can't list a Honda Tuning article either

Your cousin may infact have such a car, but you sound like every other ricer in the parking lot that "knows someone faster". Saying "1,000 hp" and "9.0" is pretty generic, and hardly specific enough to lend you ANY credibility. We call your type the "one upper". The guy that always has or knows of something better than anything you can say. I would like to to see this video, or even somehow manage a race with my mildly built SR that I don't claim power numbers to, just very specific times.

As far as this build is concerned, it will be quick. But not as quick as it could be. Like Mr. Davis pointed out originally, there are quite a few things that are questionable at best, and easily could have been substituted with superior, and CHEAPER equipment. I forsee mid-high 10s it first few times out, and as the team learns the car, and how to optimize what they have it will get quicker. There is 9 sec potential there, especially being sponsored. Given time this car could be a force to be reckoned with.

sweet looking car .not seen one built to spec as this in uk yet .cant wait to see it run sound promising.good luck

hmmm.sorry for the typeing error the sleeves 81mm to 85mm

Great work again Ross, everywhere i look this month all i can see is more of your work.

People should hold off on the hating until you can see what the car can do.

I've seen this car in the metal and Ray (RMS Japworks) has made an excellent start on building a drag spec Civic in the UK on a budget. He's done a huge amount of the fabrication work himself. The engine in the picture isn't the final engine, it's just a mockup engine just to get everything in place. As the write up states its WORK IN PROGRESS

Ray's busy working on this daily and when the final engine is in and it goes on the strip I hope Speedhunters will feature this car again as it will be absolutely epic.

im loving this car . Why are there so many haters out there this is a on going build and im loving wat i see upto now. cant wait to see it at pod. May be a bit of comp for tdi and the other big boys