It's that time again. With the success of the two past events it's only right that JDM Allstars pays its annual visit to London for round four of the championship … Wembley.

Drifting under the gaze of the enormous (by UK standards) Wembley Stadium is the highlight of many drivers seasons, so it is always well subscribed with entries.

The start of the track is blind to spectators, so the cars burst into the arena in a cloud of smoke and noise over a small bump… 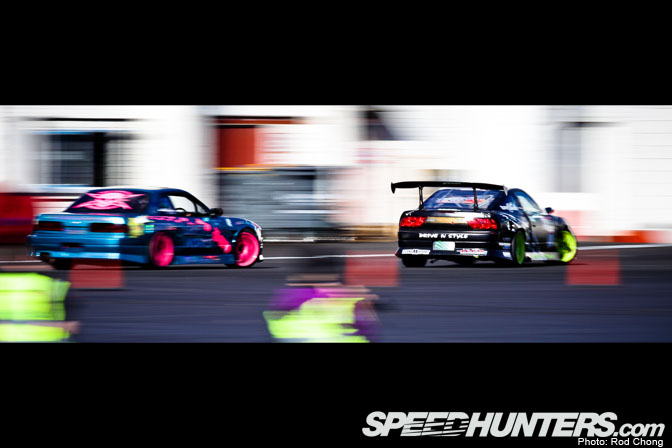 … into a fast transition …

… before going through a left / right flick and then blast through the final turn over the finish line.

Wembley was to be a bit of a learning curve for Anthony Scott. The Rocket Bunny had thrown a rod in Poland destroying the RB30. Unable to rebuild the engine in time, Scotty was using SR20 powers.

Steve 'Stiggy' Evans was one of the few who fell foul of the Wembley jump. During qualifying the air was knocked out of the tire with a hard landing and not one to be set back by a flat tire with only two corners remaining, Steve remained flat on the gas only to flip the tire completely off the rim entering the final turn.

It's never a good thing to have to compete against your team mate in the first battles. Qualifying positions dictated that Matt Steele had to run against team mate Jon Clavert. Somebody had to loose and it was Matt that took the early bath.

Evans had a convincing win against Plugge to make it into the top 16.

An on form Nigel Colfer beat Lennard Wanders and progressed into the next round.

Dan Chapman was "not really feeling it" but that didn't stop him taking a win in the top 32.

You may have thought James Deane and Brian McCann were battling for life-its-self the way they took to the track.  Swapping paint on every turn McCann eventually span and Deane goes though.

Just as the top 32 ended the British summer time served up nice little downpour. Thankfully it was short lived and didn't effect track conditions that much..

As Calvert and McKeever took to the track for the first of the top 16 battles you would have thought the storm had never happened. McKeever broke a drive shaft in the first runs and looked like he was out when a OMT decision was announced. A huge effort from his team saw the damaged shaft changed and Dwain back out to complete the battle. A spin finally put a stop to his day and Jon Calvert progressed on to the top 8.

Steve Evans looked like he had it in the bag pulling away from Walton Smith during the first run. Entering the final turn he carried a little too much angle, he span giving Walton Smith a huge advantage. Try as he might Walton could not be pressured into a mistake and that was the end of Stiggys day. Walton progressed to the next round.

Christy Carpenter made a mistake against Piotr Jankowski sending Jankowski through to the top 8.

Dan Chapman was caught out with the final turn. A spin from Chapman sees Nigel Colfer with a top 8 place.

Krys Terej SR20 powered FD suffered a engine failure on the warm up lap giving Alan Mccord and easy progression to the next round.

First up in the top 8, Walton Smith Vs Jon Calvert. After a hard fought battle Walton takes the win and a place in the semi-finals.

Nigel Colfer Vs Piotr Jankowski had to go OMT with Colfer taking the win.

Trela versus Fink was epic !

With neither driver giving an inch, contact was made in the final turn and the battle went OMT …

… with Trela eventually taking the win.

With a 400BHP disadvantage (yes you did read that correctly) George Tilling took Alan McCord OMT. Only for McCord to suffer a mechanical failure at the start of the rerun. Tilling gets a semi-final place.

Into the semis and Nigel Colfer takes the win leaving Walton Smith to fight it out in the 3rd place play off.

The crowd got behind George as he lined up for the battle with Trela..

Trela in the RB powered S13 took the win, leaving Tilling to fight it out with Walton Smith for 3rd place.

In an Ireland Vs Poland final the first runs were far too close to call and the only decision was OMT. Trela with crazy amounts of lock very narrowly takes the Round 4 win.

George Tilling beat Walton to get 3rd place. Nigel Colfer 2nd and the first victory for a Polish driver in UK competition went to Pawel Trela. Once again JDM Allstars Wembley has produced some truly stunning driving and awesome competition. With none of the championship leaders making it onto the podium it's going to make a very interesting final round in five days time at Silverstone. Rod and Paddy will be along soon with some more from JDM Allstars Wembley.

you mean trela brake checks? thats not skills and shouldnt be a part of drifting

Since Trela got the podium top, the judges obviously have a different opinion about his brake checking.

What a day. It was great shooting with you guys and a big thanks to Paddy McGrath for letting me tag along!

I hope that some nice sponsor saw him

the 4door in the second pic is bad-ass !! good times !! some great pics from jdm allstars too !

What is the name of the wheels on the red 240sx? thanks in forward

i dont think even the judges knew what was going on..considering they overturned the decision into lukes favor after an appeal was made..Trela then making a further appeal only to have them overturn the 2nd decision and run OMT..

Trelas lock in the 2nd to last pic is effin CRAZY. From what I have read this year, I guess thats what it takes to beat Fink

Sure wish Driftstream (or someone else) would BROADCAST the European events? (hint hint)

Congratulations to Trela, Colfer and Tilling

Superb weekend had by all

These established European pilots defenitely will come when their travel and stay costs are paid. In this way they are absent the whole year at JDM with their "Highly competitive worlwide" field of competitors. Glad a Polish driver won and not Fink or Chapman in a field of 20 English people like last round

Is the NEXEN TIRE S15 wearing ADVAN A048 tires? Really?

his car looks retarded though

Can we have the 1st picture as desktop please?

Gotta give Stiggy his props for dedication.

Such an awesome weekend love wembley & let's face it it wouldn't be wembley without a splash of rain now would it? CONGRATS to ,trela colfer & tilling!!!

Can't wait til next weekend ?

nice write up, and thnx for all the cool pictures!