Round 4 of the American Le Mans series took place at Miller Motorsports Park (MMP) in Salt Lake City Utah.  MMP is set in the middle of the desert, which constantly produces a sand filled track, making it difficult to build a tire that works with the surface, as well as generate a car set-up that works well in all conditions.  Team Falken Tire had high hopes coming into MMP as we had completed two days of tire testing prior to the race.

MMP is one of everyone’s favorite events on the schedule, when you first drive into the facility it is a place that makes you feel like you are apart of something special.  Larry Miller and his crew did a great job at building the Countries best facility.

Early on Friday morning Wolf and my duties started early, we were requested by Porsche to do an ABC morning show interview to try and generate some interest for the event and fans.  The session wasn’t until later in the afternoon but our morning began at 6:15am.  It was an early morning, but well worth it we had a great time and got some fantastic PR.

Wolf started the first session of the weekend, and no different from any other weekend this would be a tell tale of what to expect for the rest of the event.

We knew that our car set-up would be relatively close to where we needed it to be because of the test we had done a month earlier.  However one thing we did not fully expect was an additional 20 degrees of ambient temperature.

During the first session our worst fears had been realized, the tires and car set-up that we had tested so successfully with was not working in the warmer temperatures.  We had a very large balance issue, with a ton of understeer and we also had some tire degradation that needed to be addressed.  It was now back to the drawing board.

Fortunately for Team Falken Tire, our tire and race engineers were able to come up with a solution.  We had different spec tires that we were saving to test for just this type of occasion.  After the session we collectively made the decision to switch tire compounds and chase a different path.

Saturday morning’s session would be a new start.

Saturday morning came around very quickly and ended even quicker.  We had a massive fire that started with the rear floor of the car.  The muffler had a crack in it from a previous incident that caused the exhaust fumes to burn right through the heat shielding and right down to the carbon floor.  As soon as the floor was on fire it was not long after that the whole rear of the car followed suit.

Here's the video of the Falken BBQ.

The fire was certainly one of the scarier moments I have had in my career.  As a driver you try and prepare yourself for as many bad situations as possible but nothing truly prepares you for the real thing.

The fire caused a substantial amount of damage to the car, fortunately all the Porsche fire systems worked perfectly and were able to help supress the fire.  The guys had a long day ahead of them.

With the amount of damage that was caused by the fire all the guys on the crew were forced to pull the motor out of the car, redo all of the wiring and replace the motor as precaution.  The smell left after the fire was terrible even if you like BBQ this wasn’t a smell you would enjoy.

The guys worked so hard all day to try and get the car prepped for qualifying, despite their best efforts we were just a little shy of having the car ready.  It was a pure miracle the car was even done by the end of the day, there were people doubting that we would even make the race, but my guys pulled through.

IMSA was hugely cooperative with us though out the weekend trying to make sure we were as prepared for the race as possible.  They cleared some time for us early on Sunday morning to go on track for a hardship lap and run some systems checks.

Following the morning hardship lap it was all smiles at Team Falken Tire, the car had checked out flawlessly, the guys had done it!  Now the weekend was ready to begin!

Although the car had checked out in the hardship laps there was still some cause for concern.  We had missed two full sessions as well as qualifying, and when a field is a close as it is in GT there is no substitute for track time.

For those of you who are unfamiliar with how the grid procedure takes place let me explain it.  Prior to every race we have what’s called recon laps, these laps are how we get the car from pit lane to our staging area on track before the race starts.

There is usually a window of thirty minutes to leave pit lane and get you car stopped on the grid.  During those thirty minutes you are able to come in and out of pit lane as many times as you would like so long as it doesn’t go over your allotted time.

We took this opportunity to do a couple of laps and do some more system checks as well as get a balance read on the car from the changes we had made in our previous session.

It was clear that after our recon laps we would have our work cut out for us.  Not only were we starting last on the grid, our car set-up was also less than ideal.  We knew that we would have to get through the field quickly and use all the pit stops as a time to tune the racecar and prepare for the last stint of the The race started according to plan, we were able to get through the GTC field within two laps.  The weekend started with a lot of bad luck but very quickly our luck was changing.  As soon as I was through the GTC field the race went full course caution, and we found ourselves at the tail end of the GT field and in contention

Although we were at the end of the GT field our pace was not as good as it needed to be so we began working on a plan to make adjustments.  I was reporting the balance issues to the engineers and they took those reports and found ways to apply them.

We took advantage of an early yellow that came out and changed our tires and put fuel in the car.  Along with the tires and fuel we also made a bar adjustment to help and reduce the amount of understeer in the car.  The adjustment made a big difference but was not quite enough so we were looking towards our next stop to change more.

The next stop would be normal service with fuel, tires and a driver change.

Along with all of the standard changes we also made more car changes, and sent Wolf on his way to finish the race.

The remainder of the race went according to plan, the changes made the car faster and Wolf was able to drive his way all the way to seventh place.  The two Extreme Speed Ferraris were behind us and proved to be too fast to keep it that way.

Wolf drove a fantastic second half of the race and brought the car home in ninth.

All and all the weekend ended up to be fairly successful.  In a race that people had all but written us off to even start, we had survived and done well.  All the credit this weekend had to be given to the crew without their hard work we would have never made it.  Although we didn’t make it on the podium we were presented with an award from the members at MMP forever reminding us of the horrid smell left in the car. 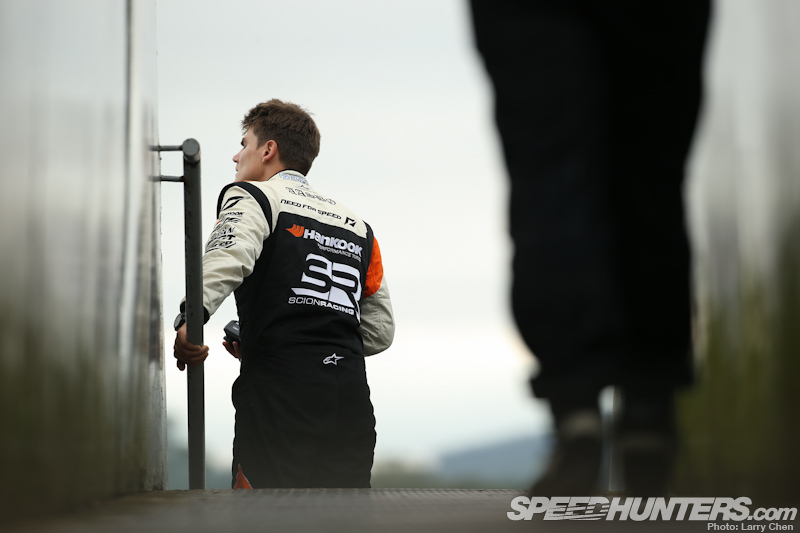 these photos are seriously amazing, i want to shoot this track

Great dedication to get that car fixed!

A truly amazing effort by the mechanics to get that car back up and running.

Kudos to the Falken team for getting it back on the road in time to run the race.

That "special award" is too funny. It's cool to see there is still humor in as serious a racing series as ALMS. Desktop request: picture 24 please! (two-wheeling)

We'll always pull through for you Brian! Hahahaha don't worry we'll get them and everyone won't even know what hit them!

i want to make love to that car!

Any chance of a hi-res version of that first shot, please?

Amiable brief and this enter helped me alot in my college assignement. Thank you on your information.