The 2010 is underway. Seems strange to think three hours are already in the books.  The #3 Peugeot led from pole but as we came up to the three hour mark, this car was brought into the pits with what appears to be a broken suspension pick-up point. The pole-sitting Peugeot has now been confirmed as retired.

The big news early on was a accident with Nigel Mansell at the wheel of his Ginetta Zytek. Mansell had earlier straight lined a chicane. It appears Mansell suffered a puncture, but it has not been confirmed. Mansell was extracted out the car and sent to the medical centre. We have been told he is OK.

The BMW M3 car is a very popular entry here at La Sarthe. Unfortunately, the car suffered a puncture and then floor damage, necessitating a floor and rear axle stage.

The start was quite amazing. Re-introduced this year, the Herring-bone start was cool, with some drivers running and some taking a lesiurely stroll across the track. 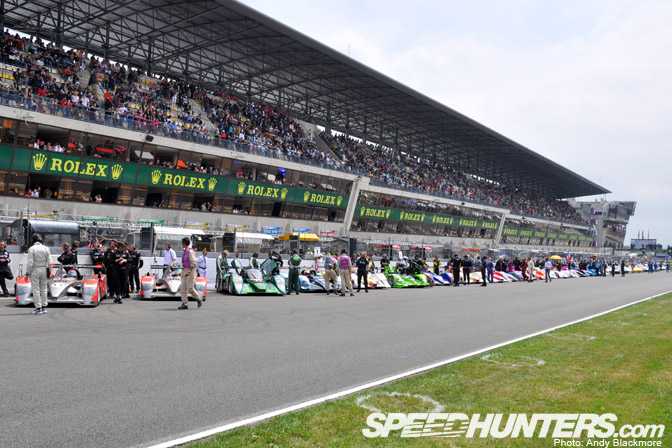 It didn't matter as they were off on a warm-up lap.  Quite a display.

So, as we hit the three hour mark, the positions are as follows….

I hope the 908 Oreca to win it. The best looking Peugot Imo.

I'm glad the herring Bone start didnt lead directly into the race as there was a very good reason behind it being discontinued.

BMW needs to do more art cars. the cars from the 70's were incredible. Richard Prince should def do one