Down to earth with a bump, the AMG Mercedes squad trailed back to Affalterbach to conduct the post mortem on the Le Mans debacle. That the two engine failures suffered were as a result of the failure of a very minor part added to the sense of injustice.

But the AMG squad are real professionals, so the problem was put right and everyone focused on the next challenge, winning the FIA GT Championship. That meant beating Porsche who had just won at Le Mans, time for a bit of serious revenge. 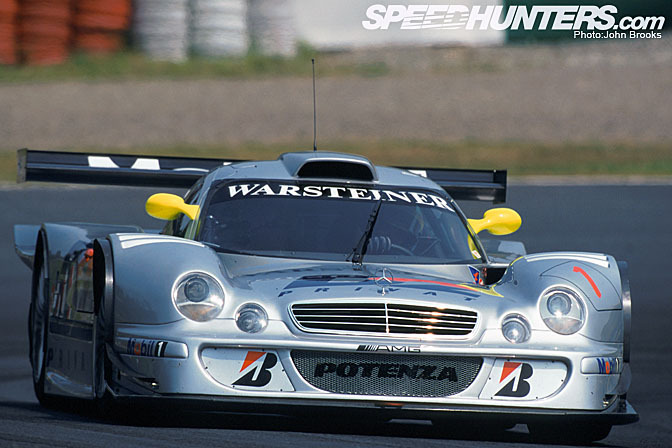 Recently I wrote about the opposition to the AMG Mercedes team that realistically could only come from the factory Porsche outfit. For the first two rounds of the 1998 FIA GT Championship the 911 GT1-98 was faster than the V12 powered CLK GTR but somehow the advantage did not translate into results so Merc were two victories up and now they launched the V8 CLK LM into the contest, it was difficult to see how they could lose.

For Porsche's take on events:

There was a second outfit running for Mercedes, Team Persson Motorsport soldiered on with the 98 spec CLK GTRs but even the 110% efforts of Christophe Bouchut could not match the pace of the AMG squad. He was joined in this ultimately fruitless quest by Bernd Maylander, Marcel Tiemann and Jean Marc Gounon. 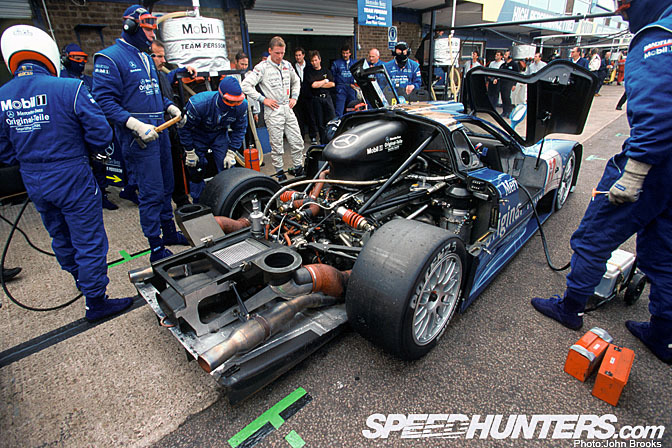 I am no mechanic but I do know that when a hammer is the solution to a problem on a race car it is not a good sign.

As the season unfolded the real battle was between the #1 car of Golden Boy, Bernd Schneider and Mark Webber and #2 with wily veteran Klaus Ludwig and Ricardo Zonta. It was a good job that this contest was allowed or rather tolerated by the Benz management, it relieved a great deal of tedium.

Rod posted a couple of features on Klaus last year:

Despite occasional interventions by Allan McNish in the Porsche as the season drew to it's climax, the Silverware was the exclesive property of AMG's Silver Arrows. Here at Suzuka it was the turn of Schneider/Webber to get the top step of the podium. They took other wins at Silverstone, Hockenheim, Hungaroring, Donington. The Ludwig/Zonta duo won at Oschersleben, Dijon and A1-Ring.

The circus crossed the Atlantic for the final two rounds, the first of which was held at the charmless Homestead track, some way south of Miami. Although the #1 car had scored more wins, a retirement at Dijon meant that they only a 3 point advantage over #2.

The race effectively decided the title as Webber spun late in the race and in the time it took to tow the CLK LM out of the gravel bed he lost four places.

The final act was played out in the altogether more agreeable surroundings of Laguna Seca, on California's Monterey Peninsula. The advantage had swung the way of #2 as they now had a chance of taking the title, all they had to do was win……….adding to the pressure was the announcement that Ludwig would retire at the end of the race.

Ludwig drove a great stint to establish a nine second lead with Schneider relegated to third by the irrepressible McNish. Once the Scot retired with a clutch problem it was game on.

Despite the normal ebb and flow of the race and the pit stops it was enough to see an emotional win for #2. Ricardo Zonta took the flag to give his team mate a special retirement present.

The final act of the 1998 FIA GT Championship was to give Klaus a bubble bath, not sure what the vintage was though.

The steamroller performance of AMG Mercedes went some way to making up for the disappointment of the early baths at Le Mans. They would return in 1999, what else could possibly go wrong?

Aww, come on... Homestead actually has a bit of charm to some of us that are from down here. :p

"I am no mechanic but I do know that when a hammer is the solution to a problem on a race car it is not a good sign." LoL classic!

John, one article I would like to see is about you, your career, your highlights and who's paid the bills for you to travel all over the world to capture the world of motorsport through your lens (I remember you saying you worked for Sutton for a while...).

Yes!!! This is the series of articles I've been waiting for! The rise and fall of Mercedes' sportscar program has always been a story that's fascinated me. So to hear it from the perspective of someone who witnessed it first hand is indeed a real treat. Thank you Mr. Brooks!

ahah! 3rd pic from bottom! That was the powerslide i was talking about in Black sheep #1.

any chance we will get to hear some stories about the Panoz from the same season?

Man, seeing these pics of the LMS here in the US makes me think as great as it is to have ALMS at Laguna Seca, I wish we could get the full shebang; Peugeots, GT-Rs & all. Or in Long Beach too, THAT'D be a race! Great article though, keep the stories & pics coming! Oh, and +1 for a Panoz story.

great read once again looking foward to part 3, would love to hear about Panoz as mention another commenter

6th pic from the bottom, there is a Toyota Supra @ Suzuka =P

And LOL @ the pit guy with the hammer in his hand!

Mr. Brooks, in case you have not considered it yet. I would love to see you publish a book that combines your in depth knowledge of motorsports with the amazing pictures you took. You could make it about a certain brand, or a certain championship, or a specific year. Sort of an expanded version of your articles. Regardless, thank you very much for your contributions, much appreciated!

a classic retrospective of an iconic car & era.. thanks