Rabbie Burns' take on the essential futility of making any kind of plans struck a chrord this week. Yes even here, on SpeedHunters. The traditional LMS Test held in early March at the High Tech Test Track is usually a crisp, bright affair with the Mistral blowing and keeping us on our toes. It is an event that we all look forward to as a way of chasing the cobwebs out of our brains and our cameras after the winter hiatus. 2010 proved that particular theory wrong. With the exception of the first hour or so we shivered in arctic conditions that were as grey as they were miserable. It was small consolation to hear that snow was falling heavily in Marseilles to the West, and had closed the Autoroute near Valences to the North, while somehow we escaped the intervention of the white stuff.

If those of us grumbling trackside were confused, what about the poor teams? Everyone I spoke to, from drivers and team managers to tyre technicians, all agreed that most of what was being done was a waste of time and would, in the long run, prove nothing. The cold weather prevented the tyres getting up to temperature and the direction of the wind down the long back straight blunted the top speed of the competitors. Perhaps this is how the much improved ORECA 01 AIM came to head the timesheets overall. The car, now shod on Dunlops, has made gains in several areas over 2009. The lead driver, Soheil Ayari, is now joined by Didier Andre and new boy Andy Meyrick. All three did a good job in difficult conditions.

Nevertheless it is difficult to see that the AIM powered prototype will stay in front of ORECA's other effort, a 2010-spec Peugeot 908 Hdi FAP. Once normal service is resumed this will trouble even the Werks Audis and Peugeots. The word from Le Castellet was that the Test was used to give new recruit, Loic Duval, some serious seat time and that race simulation was the main objective of the weekend once the prevailing conditions became apparent. Time will tell.

In the petrol LMP1 class the main opposition to ORECA is likely to come from the Lola Aston Martin with ALMS refugee, Adrian Fernandez, making the elegant coupe howl along the straights of the HTTT.

The line up in the remaining petrol LMP1 entries had a distinctly 80s Formula One retro feel to it. 1992 World Champion, Nigel Mansell, was on hand, running in the Ginetta-Zytek 09S with his two sons, Greg and Leo. The car posted comeptitive times with Leo setting the pace. Mansell declared that he wished he had taken up endurance racing years ago. The team attracted attention from the UK tabloid media and "Our Nige" is still news with the Red Top brigade.

Andretti and Prost…..sounds like a mid 80s dream team combining two great champions from America and France. Well up to a point , Lord Copper. The names remain the same but the generations have skipped. Nicolas Prost, son of three-time World Champion, Alain, is teamed up with Marco Andretti in the Rebellion Racing Lola B10/60.

Marco's grandfather, the legendary Mario, was on hand to support the kid. Le Mans and Andretti have something of a difficult history. He was part of the Ford factory effort that dominated 1966 and 1967 but his car failed to finish both years. After retiring from Formula One he came back to La Sarthe and was involved in a notoriously controversial incident, even by ACO standards. Andretti's Mirage Ford had passed scrutineering, ran without problem in practice and qualifying but was hauled off the grid just before the race as the officials suddenly 'discovered' that the gearbox oil cooler was located in the wrong place. It would be a gross understatement to say that there was a monumental row………………..

In 1988 Mario was part of the factory Porsche squad, driving with his son Michael (Marco's father) and nephew John. After dramas aplenty they finished 6th. 1995 saw Andretti's best chance of overall victory, driving a Courage Porsche with Bob Wollek and Eric Helary. The weather conditions were terrible, which eroded the speed advantage of the prototypes over the GTs, particularly the McLarens. Mario crashed the Courage avoiding a slower car and ripped off the rear wing. Repairs took 25 minutes………the car finished second just one lap down (4 minutes).Another year had slipped by.

So there is some unfinished business for the Andretti clan at Le Mans. Mario looked in great shape, having just turned 70, I should look so good at that age.

The LMS roster of famous names are not all from the past, Giancarlo Fisichella, Ferrari's F1 reserve driver for 2010, will compete in the LMS driving a AF Corse Ferrari F430 GT. It is an outward symbol of just how important the LM GT2 class has become. Observers expect a battle for the future direction of GT racing with Stephane Ratel trying to drive competitors into his new GT1 World Championship. The recent announcement from his organisation that the FIA GT2 Championship had been canned for 2010 did not go down well with the GT2 family or the ACO. An official press release from the ACO after the test emphasised the committment of the famous French Classic to the category and with factory efforts from Aston Martin, BMW, Corvette, Ferrari, Jaguar, Porsche and Spyker all on the grid, it is not hard to see why. A split in the GT world is forecast by many and my money would be on GT2, still Ratel has a record of pulling the rabbit out of the hat.

Indeed, there will be at least eight F430 Ferraris on the LMS grids, all run to a high standard.

Opposing the Italians will be the Old Enemy, Porsche. With the LMS being the only top line GT2 competition in Europe there are now be at least six 997 GT3 RSRs to take up cudgels and as ever the Felbermayr example with Marc Lieb and Richard Lietz was well to the fore at Ricard. The usual factory assistance was hand, with the legendary Norbert Singer starting his 40th season with Porsche, amazing.

JMW Motorsport was on hand to show off their Aston Martin V8 Vantage in Dunlop Yellow, reflecting their parnership with the tyre giant and the Aston Martin factory. 2009 FIA GT2 Champion Richard Westbrook, was due to drive with Rob Bell for the LMS season but has now had to jump ship back to the Belgian ProSpeed Porsche outfit. Darren Turner will take his place to create another strong entry in the series. Aston Martin Racing are keen to get the GT2 project up to their usual top level and are throwing resources behind this car.

Perhaps the biggest story in LM GT2 is the return of BMW and Schnitzer Motorsport. They turned up at Le Castellet with just one car, rumoured to be in VLN spec rather than ACO but most of us could not tell the difference. Whatever Charley and his Boyz are back and the rest of the GT2 grid better watch out as they usually come out on top.

The BMW had a few problems, something in the engine and decided to miss the second day but the team did not look too disappointed.

LM GT1 made an appearance at the Test, there being a Ford GT from constructor, Matech.

Aston Martin made it participation in three classes out of four with the Young Driver AMR DBR9.

Also getting into the mix for the first time were a number of Formula Le Mans cars.

The jury is still out on the wisdom of allowing the Corvette engined prototypes into the field, many in the paddock feeling that these could easily turn into mobile chicanes. At Spa with the factory Audis and Peugeots going flat out against each other there are potential problems in having these cars on track.

The final category, LMP2 has seen several changes in the field with Strakka Racing exchanging an LMP1 Zytek for a LMP2 Acura, a smart move most think. The team looked fast all weekend.

They will need to be, as aside from the current champions Quifel ASM being on the pace, the likes of RML have changed engines and thereby cured the problem that held them back in 2009.

"A tale told by an idiot, full of sound and fury, signifying nothing". Shakespeare must have read some of my features before dropping that line into Macbeth. It is, perhaps, an appropriate label for the 2010 LMS Test, which strove mightily but achieved little. This Phoney War will be rudely shattered when we return to HTTT Paul Ricard next month for the 8 Hours of Le Castellet.

We will be there.

Spa Through The Eyes Of Ekström 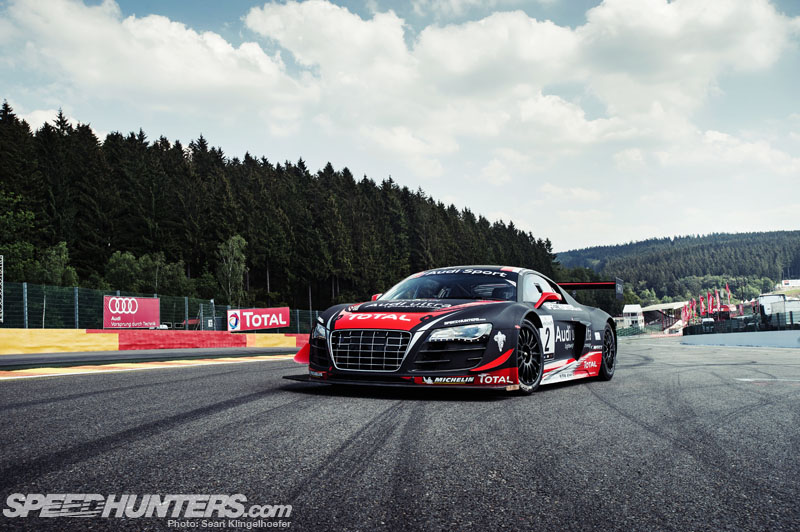 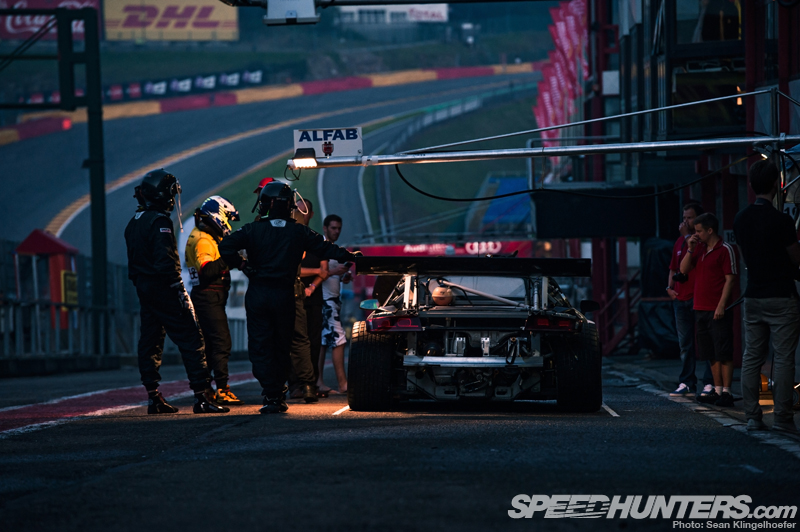 Joy Of Machine: The Cars Of Spa

I was here, too bad it was soooo cold :/

So nice, great pics and read!

And what is the number 25 P2 car (penultimate pic), it looks sooooo good!

Nice, can't wait untill it's May! The 1000km of Spa is always awesome since it's the last race before

Man the field looks great. GT2 is definitely what to watch.

And can I also, that was great writing, loved the literature thrown in.

I love the way cars look with just a few sponsership decals and that yellow suits the Aston pretty damn well.

Anyone going this weekend?

ALMS is this up coming weekend. This piece is on the LMS. :p

nice day to everyone!

I've seen it all now - Rabbie Burns quotes on a sportscar article!

'Interesting' move re GT2 by SRO. How do the new GT1 laptimes compare to GT2? I suspect they may be a bit closer than many would like? Will there ever be harmony between ACO and FIA over regs.......?