This past weekend I traveled down to Summit Point WV for the first Drift Nirvana event of the season.  This is my first assignment for Speedhunters and my first drift event of the year, so needless to say I was pretty excited!  Mother nature hasn't been too kind to us here on the East Coast this past month.  After a few weeks of snow storms, I was looking forward to getting out into the crisp March air and finally do some speedhunting.  Unfortunately the weather didn't cooperate.  Four days non-stop of heavy rain hit us pretty hard making conditions at the track pretty nasty.

A downpour wasn't going to stop most of these guys!  Dan Savage borrowed his friend's 180SX and tore up the track as usual.  This S13 wasn't too heavily modified and was running stock boost.  Dan later told me "all it takes is a crazy nut behind the wheel".  That and a dude with some skill.

The rain did make things rough for some though.  This red FC hit a wall pretty hard early in the morning before I got there.

I really dig the wheel fitment on this S13!

With the conditions being so slippery, most of the drivers cut their speed back as they approached some of the sharper turns on the track.

We all saw quite a few spin outs in the morning session.

The heavy rain eventually tapered off so I decided to walk down to the pit area and check out some of the cars.  The first one that caught my attention was this clean and simple Toyota Artisto.


Personally, I thought it was a nice choice of both fitment and wheels.  What do you guys think?

Right next to the Toyota was this R34.  This was probably the most popular car at the track!  There seemed to be a large crowd gathered around every time I walked past.  Obviously the most common cars you see at grass roots events are 240's, so this was a like a breath of fresh air.

I didn't get a chance to talk to the owner but the mud caked all over shows he must have been having a bit of fun earlier.

How about an S15 front end on an S13?  I talked to the owner Alan Brentzel about his conversion.  He said "I wouldn't do it any other way".

I'll let the door be the caption here!

I wanted to make sure I caught some of the action over at the skid pad while I was there.  It just a huge paved circle for some of the beginners to get a feel for drifting.  I think there were a few experienced guys there just looking for some fun as well!

The guy driving in this picture is 15 year old Nate Chen. I was told it was his first time out and he doesn't have is driver's license yet.  His friend Clayton was cool enough to let him hop in the driver's seat for a few spins.  Looking pretty good little buddy!

I watched this RX-8 take some laps around the circle.  This guy was on the throttle the whole time!

This was the spot to see a variety of cars.  I saw this M3 sitting in line, so I had to snap a shot of it.  I usually don't go for chrome rims, but they sure do look pretty nice on this convertible.

Everybody had a nice coat of mud.

I wanted to stay at the skid pad a bit longer but the main track started to dry up.  I wanted to finally be able to catch some of the action on dry land!

There were however quite a few large puddles.

Once the rain finally called it quits, it was game on!  It was nice to see the sun try and break out for a few minutes here and there.

Despite his wreck early, this guy was still going strong all afternoon.

This is when a small pond becomes a clipping point!

I'll leave you with this final shot from the last turn.  This FC had an LS1 engine swap and was the loudest machine there.  I wish you guys could have heard how insanely loud this car was.

I got in contact with the driver Ryan Downey who told me he borrowed the car from his friend Tony.  They were in North Carolina the day before competing in another event then drove up to West Virginia the next morning.  That is total love and dedication to this sport- these guys who drive hours to get to a track, beat the hell out of their car all day, then pack up and drive all night to do it all again the next day. 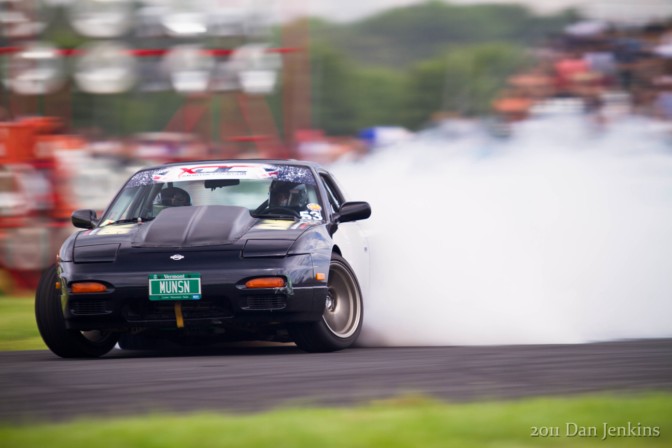 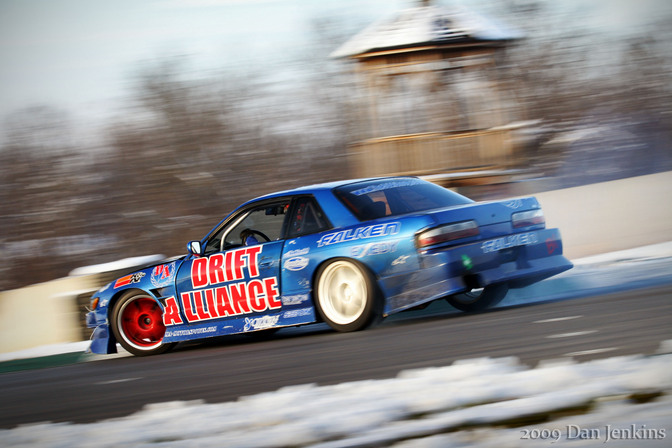 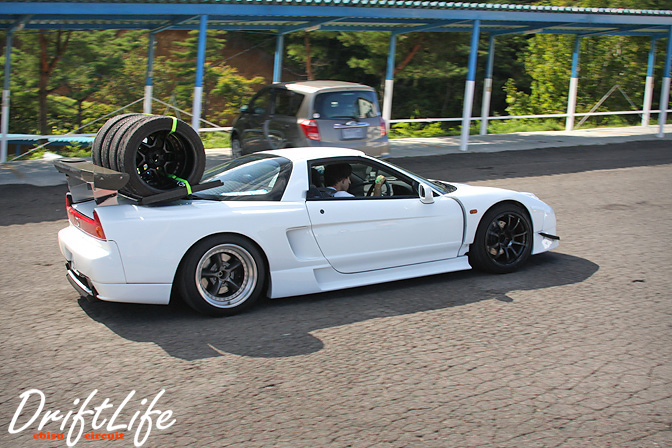 Are there any drift clubs in Northern VA?

is it just me or does that 34 gt-r not look right. front fenders, front bar and lights dont look right :S

Congrats to everyone that came and competed. Esp congrats to the top 3 pro winners. Only in WVA will all three top spots be real rhd cars out of the same group, SAVAGE/151 Motorsports. Top 2 being owned by Jimmy S.

Requesting wallpaper of that FC

Yeah Ben killed it after he wrecked, just pulled the fender out, and tried to straighten the tie rod out, it was still not driving straight but he still got first in the joe's.

This is the Northern VA drift spot.. Summit point is only 2 miles inside W.VA... about 40 minutes from Dulles Airport.

Definitely had a great time out there. cant wait until the next one.

for more info on the stickers hit up 1kdrifters.blogspot.com.

hopefully will be back out there with an S13 soon! Loved the article!

Not only was Ben back out there for the day, but actually he got the Highest score of anyone out there in the comp. Beating out everyone in the Pros catagory his first time drifting on track.

I own that zombie! somehow i got put in the "joes" category but took first place overall from what i heard. any extra fc pic through them at me please! apocalipticprobe@gmail.com

Ya know, for someone who started out with a used camera you've come a long way!! This post is SOOOO impressive, son. You have a natural eye behind the lens. These pics are "Sweet!"

more of that drift truck rps13!

it was kind of lame write up, but its good since its your first an all , congrats. i just felt you needed to step up your car talk. weve seen a lot here, its not like an s13.5 is impressive or w.e. but keep them coming pal. good coverage

You made a few typos:

"The guy driving in this picture is 16+ years old Nate Chen. Even though he has years of legal driving experience, I was told it was his first time out on the skid pad and he has a very valid driver's license and can prove it. His friend Clayton was cool enough to let him hop in the driver's seat for a few spins. Looking pretty good old-enough-to-drive buddy!"

theyre 18x10 saleen mustang replicas on the back of my car. i love speedhunters more than ever now.

Ah man I remember seeing that red s14 with black fenders at some local drift events..the driver is pretty bad but the car is awesome

Dan, you've done a great job - not just on the photos, but on the interesting read. Love the character you see at these events - grassroots to the core!

Hope to see much more from you, dude. Its been great seeing you come up and you're definitely talented. You've worked real hard at this and I hope it pays off for you! You're certainly one of the most authentic guys out there with a camera and you've got my support 110%

clay sid and nate all on speedhunters!!!!!!

coevolve - theres a car crew called Hardbody, some of the members have drift cars

I'll be out there in april with my FD.

Glenn_b is right the R34 is missing the lower chin spolier on the front bar, that is why it might not look right to you.

Congrats on making it to Speedhunters!

Too bad the guy who's wheel fitment you liked the best scored the lowest in the competition. For drift event coverage, there's a problem when almost half the shots are of cars parked. Also... "Artisto?" Better step up the writing and the shooting now that you've made it this far!

Awesome write up and pics Dan!!! Thank you so much for the shots!!!!!

Great job Ben, wish I could have been there to see you take first place....good job on crash also...

we actually built the s13 truck in 3 days before the event. we used stuff that was laying around the shop and made it work.. that is actually a r33 front end on it. hope everyone likes it. J3 PERFORMANCE all the way

I want a background for that chopped s13. seriously.

good info/comments from the event!

thanks for this superb work!

Nice coverage.....good to see Im's M3 hgot some love and just so you know its polished not chrome...

yeah, lowest in competition is alright when compring experience and powerplant. i had a ton of fun though, any more pictures of it, feel free to post somewhere to just send 'em. haha

Would have been an awesome day!

All the drift pigs looks cool as!

That M3 convertble you posted is mine. Appreciate it, only error is that the wheels aren't chrome. They are fully polished, or atleast they usually are haha.

Here are some pics I took

Does anyone else think that that R34 GT-R's front end looks off???

J3Motorsports, that's where it's at. Contact me at patricklong90@gmail.com if you need work done for CHEAP!

Good pics...event could have been better.

I mean.. seems all the better drivers were at another event or no shows because of the weather.

Can't you do any S13 track oriented features?

I dig drifting, but it would be nice to see some nice S13's in track spec