I hope you guys enjoyed Skyline Week on Speedhunters and found it to be a somewhat eye opening experience. I had a sense that the Skyline community was a global massive, but seeing all of the reader’s rides submissions has deepened my understanding of this international scene. One key cultural flashpoint for all things GT-R related is the UK -someone once told me there are now more GT-Rs in the UK than in Japan itself! It’s a statement which very much could be true given the strength of this community.

I’ve been spending a lot of time in the UK the past few months, so last week decided to try and set up a date with this very special R33. I’d heard about this car from a colleague of mine who works at the SMS game studio and had been interested in shooting the car for some time. So when the plan for Skyline week was solidified, it was the perfect excuse to meet up with and photograph this legendary machine.

I hope you just reviewed the video I posted a few hours ago.

It’s a section from the Max Power video “Beasts from the East” which infamously featured footage of this car hitting 205 mph at the hands of its builder Smoky
Nagata.

At the time of the car’s creation, it was one of the most extreme builds ever attempted with a whopping 1200 bhp on tap, to propel the R33 to nine second quarter mile runs…. And remember this was and still is, a street legal machine.

After its life as a Top Secret demo car was over, the Drag R II was sold to the British Skyline fanatic, Tim Webster who imported it into the UK. At the time, he also owned the Jun Hyper Lemon II and the Duke R33 drag machine too…. all famous machines from this time period.

Tim didn’t really do much with the car, he was busy building up his own tuned up R34 Nur. So the R33 collected dust for a few years until Tweenie Rob from the UK GT-R tuning house TR Racing bought the car.

It was at this moment that a customer of his we’ll call G Man saw the machine and knew he had to have it. “I had always loved the car since seeing it in the videos but never thought I’d get to see it in the flesh, let alone own it…..from the moment I saw it tucked in a corner at the workshop I just had to have it so I sold my 560hp R32 and bugged Rob everyday to sell it to me which he eventually did.”

It’s quite the machine to be in the possession of, as it’s a piece of living automotive history.

So let’s examine the car together. The first thing that struck me about it was how you could read the history of the car just by looking at all the stickers on it. Each marking tells its own story.

Take this sticker on the rear bumper for example.

You can see here the car is part of an exclusive group: the 0-400m 9 second club.

These small stickers on the side of the car commemorate some Daikoku Wangan meets. It makes you wonder what else Smokey got up to in this car.

This sticker is more recent and points to the recent tragic death of Tweenie Rob in late 2009 in a road accident. It’s an event which has sent some shockwaves through the UK Skyline scene unfortunately.

The wear on this sticker reminds me of the faded stickers you sometimes see on old vintage drag race cars.

No doubt some of you are members of the GTR Owners Club.

The stickers on the inside of the roof are particularly interesting -especially the Max Power decal. It was placed there at the time of the car’s original video appearance.

It’s interesting to see that the cockpit looks unchanged from the Max Power video shoot too. The car is still very close to it’s original build spec.

Data memory: the car’s computer indicate that the car has previously hit a top speed of 344kph! That’s even faster than the 328 figure shown in the Max Power video!

One can only imagine what this car done in its previous Japanese life on darkened Wangan freeways.

So let’s look into the heart of this gold rocket.

And the engine specs:

The original Enkei 18″ x 10″ wheels have been replaced with TE37s 19″ X 9.5” on all four corners. G Man does have the originals through and I’m sure they’ll be needed when this car ends up in some kind of special modified car museum in the distant future.

So what’s it like to live with a car like this? After I finished shooting the Drag R II, G Man offered to give me a ride to the local train station so I could get back to London.

I have to admit, the experience of being inside of this car is as harsh as they come. It seems pretty tough to drive, even with the boost turned down…. there is a sense of rage to the Drag R, like it’s angry to be confined to anything but the Wangan or the Autobahn.

Even at idle, it’s well over 100db inside the car. Earplug are a necessity!

Very few hands have touched this wheel. G Man must feel some honour to be the custodian of such a car.

TBH, he doesn’t drive the car much, it’s almost too extreme to take out on normal roads.

These photos don’t really convey the smell of exhaust fumes that seep into the cockpit. Nor the tightness of the Recaro seats..  Sitting in this car you are unable move at all; I cut a slim figure, but even so, I felt pretty stuffed into the seat.

But I suppose these descriptions are the whole point of such a car. This machine is an exercise of barrier breaking, from an era when 1000 bhp was a new level of auto-terror never seen before in a Japanese tuned car. Harshness be damned…

As G Man dropped me off at the train station, I just had to take one more look at this amazing piece of living automotive history and took a few more snap shops.

“We intended to bring it to some shows/events to keep the legend alive as it is without a doubt a piece of Skyline history and both felt it had been tucked away for too long and forgotten about.

“The car will always remind me of Rob and the laughs we used to have, he
loved it just as much as I did and would always find a lame excuse to
take it out for a spin whenever I was up the workshop.” 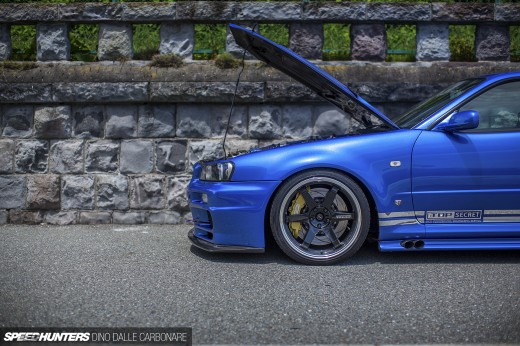 Very nice. A classic. More power can be made with less lag these days, but this was still a decent achievement.

that was a great story! a desktop of the first picture would be awesome!

Remembering preordering the Beast From The East video, from MAX power. btw this car had 1000 hp at the first TAS and than they upped it to 1200 later. Sick build at the time.

This car and smoky got me into freewayracing.

I have that Max Power on original vhs-tape.

I love wangan racing, Option Chiba-Kun special is one of the best videos ever.

Finland isn't best place for highwayracing cos the road are crappy.

There are only few good streches of tarmac where you can take your car over 250 km/h.

I'm lucky to live next to one of the best highway.

We also have annual speed contest, but there is allways cops taking pics of the cars and license plates.

That's no no for me.

Underground racing for life (it's stupid, dangerous and illegal, but love the rush...every time)

Great write up Rod and a fitting tribute to Tweenie Rob, RIP.

Probably the best write-up on Speedhunters for me.

Desktop of the first picture would be greatly appreciated =D

nice i love this car !!! wee need a new video about this car ! go WR

great car and really good article. This Skyline is a legend. Nice to see it being still alive

Thanks for the article Rod, it's great.

I hope you enjoyed your afternoon with us at the workshop.

This car is the Bomb!

this is a great piece of history..

Awesome. Some 1st pic as a Dekstop pls

Legendary.. with a massive spec - envied by some, respected by all - salute!!

Even after two generations the R33 still lokks awesome.

an decent achievement for its day?, understatement of a lifetime, this thing is a monster, STILL TO THIS DAY this car is a prime example for power building, the parts list is mind boggling.

This car is amazing, ive been lucky enough to sit in the drivers seat of this (at top secrets workshop).. no i didnt get to drive/ or ride in it..

just an amazing car, brings back such awesome memories.

I loved this write-up and the descriptions.

This is the best SpeedHunters article ever.

I had to come back and check the beast from the east skyline out just one more time! AWESOME!!!

gold!....literally. This car still gives me the chills 12 years after I first laid eyes on it in Max Power.

Did any of you watch the F1 race today? I'm a bit irritated to be honest, as I think the new "no