Before taking up position for the start of the Dubai 24 hours I had a couple of minutes to run round the grid: or half of it at least. The usual parade of national flags awaited the cars as they formed up.

With 68 cars taking the 2pm start (five would start from the pitlane) the start straight was packed with people and jostling teams trying to get their cars through the throng and into position. As with the pitlane, there were some near misses as drivers just didn't see people or someone stepped out in front of a passing car. Grid almost ready, it was time for us to get to turn one.

There was a big cluster of photographers and video guys hunkered down at turn one ready for the start. Will Roegge and me were up in the bleachers above the corner, which gave us a great view down the length of the start line: we could see all the cars lined up, stretching right back to the final corner.

Two formation laps down, and the red lights went out. Only 23 hours, 59 minutes, 45 seconds of the race left…

The five cars starting from the pitlane streamed out onto the track: some fast cars (such as the Mosler which had originally qualified second) were in this pack so would have to deal with passing slower cars right from the start.

Just three laps into the race the #65 Imsa car was into the backmarkers. 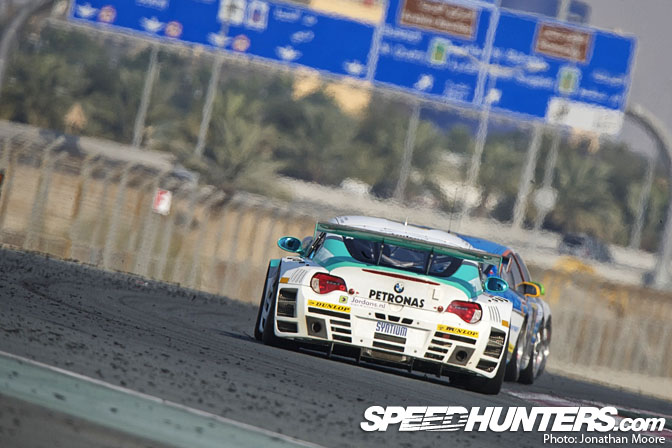 The Z4s were always going to be the main opposition to the Porsche ranks: the car has won several national 24 hour races in the past. There's an autoroute running parallel with the top of the circuit, giving drivers some ideas about where to go after the race…

The Clios were really hammering the kerbs, whereas the GT cars would skirt around them. This meant tight apexes to try and keep speed up, but with the faster cars all around the hatchbacks were always being scattered.

Ever a couple of hours into the race the sides of the track were lethally slippery: spent rubber tyre debris littered the tarmac, meaning if you were forced offline this was going to happen. Spinning Clios are definitely the signature of this race.

An hour in and the Mosler was already up to 10th place.

Dropping back was the Czech ARC Bratislava Porsche 997 which hit trouble in the third hour and gradually slipped completely out of contention.

Meanwhile at the front the Imsa Porsche continued to hammer in the laps, its only drawback being fuel tank size meaning it would have to stop every 50 minutes or so compared to 2 hours for Cup cars and almost four hours for some of the diesel hatchbacks!

The Ascari KZ1-R had a great start but suffered a broken front suspension in only the second hour of the race. 20 minutes of repair time sent the Ascari plummeting down the order.

Local team Al Faisal Racing's BMW M3 GT4 was in a pitched battle with two other UAE-run Aston Martin Vantages for the first few hours of the race.

The Hungarian-built Brokernet Silver Sting is powered by a Porsche 3.6 litre flat six from a 911 GT3. It's seen on the track pretty exclusively in the one-off enduros.

The NFS Porsche was benefitting from great fuel economy: it would break the top 10 by the fourth hour.

But the #66 Imsa Porsche continued to lead, only temporarily dropping back every hour with its more frequent fuel stops.

All the SEAT Leon Supercopas looked very aggressive out on track: the two SUNRED cars were faster courtesy of their driver line-ups and hovered around the overall top 20.

The #78 SUNRED Leon had its night-light cluster installed from the start of the race unlike its #74 sister car.

Team Black Falcon's E92 BMW M3 was only a minute behind the SEATs on the road.

The sun began to lower in the sky around 4pm and was rapidly disappearing by 5pm, casting long shadows and meaning night was drawing in. The race was only three hours old, but already there had been casualties: the Mitsubishi Evo X had an engine fire that burnt out its loom; the Rush Porsche had a heavily damaged rear end; First Motorsports Ferrari 430 had gearbox problems just 20 minutes in and an Aston was also in trouble. The top 10 was Porsche 997 vs  BMW Z4s, but there were still 21 hours to go. And then came the dark.

Congrats on taking the 5th place in class and 7th overall! Good job!

goodluck to you team NFS!

I would like to correct statement : Dropping back was the Czech ARC Bratislava Porsche 997 which hit trouble in the third hour and gradually slipped completely out of contention.

Bratislava is the capitol of Slovak Republic, not Czech! Otherwise, nice add and beautiful pics Jonathan

what's with the exhaust on nfs porsche? looks weird.

Can you make the first picture of the flags a desktop background please, I really like it.

omg ARC Bratislava its a Slovak team not Czech ...Bratislava is capital of Slovakia correct that

"Dropping back was the Czech ARC Bratislava Porsche 997 which hit trouble in the third hour and gradually slipped completely out of contention."

Its Slovak team, NOT Czech

ARC Bratislava is a Slovak team. There is even a Slovak flag on the first photo.