In 2009 Le Mans Series the prototype numbers held up well, from a high of 32 at Spa to a still respectable 22 at the Algarve. The same could not be said for GT1 which only had two season long entries with a straggler or two joining in along the way. It was a class that should have been culled from the first event. However the new rules for the GT1 World Championship would appear to have breathed life into this category. For Maserati, Ford and Nissan to gain the desired, prized invites to Le Mans they have to commit to running in the LMS, it will be interesting to see how this pans out.

In LM GT2 the quantity and the quality of the field was impressive, perhaps second only to the stellar ALMS grid in that class. As ever there was a fierce battle between Porsche and Ferrari. In a reversal of the 2008 result the Felbermayr Porsche of Marc Lieb and Richard Lietz took wins at Barcelona, Spa and Nurburgring to just shade their Italian opponents.

The Ferrari challenge was led by Rob Bell and Gianmaria Bruni in the JMW Motorsport Ferrari F430GT. They won at the Algarve and Silverstone. Indeed it seemed for most of the British round that they would take the title at the last gasp from the Germans. The Porsche suffered a severe misfire that dropped them down the field and the team feared that the engine would blow at any moment. Somehow it held together and the Felbermayr 997 staggered across the finish line in 7th place to three points and the driver's and team's championships.

In third place in the LM GT2 class was the Ferrari F430GT of Team Modena who had retired the venerable Aston Martin DBR9 and dropped down to the highly competitive GT2 category. The team was led by the mighty Antonio Garcia with Leo Mansell and arguably the best F430 pilot of them all, Jaime Mello, also in the cockpit. Team Modena led several races and were always in contention but it is a measure of how good both Felbermayr and JMW are that the top step of the podium eluded them in 2009.

So despite the difficult circumstances the 2009 Le Mans Series can be counted a success. The absence of factory teams in the top category did not detract from the racing and while GT1 struggled, the other classes prospered.

Some things to note………….drive of the year, Jean Christophe Boullion in the Pescarolo 01 at Silverstone, mesmerising.

Danny Watts grabbing pole position for Strakka Racing in the Ginetta-Zytek GZ09S at Barcelona, great scruff of the neck driving. Some issues within the team and niggling faults with the car itself prevented this outfit from fulfilling its potential. For 2010 they are stepping into the LMP2 arena with an Acura purchased from the ALMS, expect Strakka to challenging ASM and RML for the title honours.

Team of the Year had to be Aston Martin Racing, a factory team in name only as there is no financial backing from the iconic car brand. AMR took on paying drivers, recruited sponsors in a difficult market and turned in a top line performance, comfortably being best petrol powered prototype around.

Hero to Zero. One of the daftest moments in the 2009 LMS came when Xavier Pompidieu stopped his Lola B08/80 in front of his team after winning the LMP2 class at Silverstone. The track was still hot and full of cars at racing speeds, so of course it happened, another competitor ploughed into the back of the Lola…………..an avoidable incident I think the Stewards called it…………..lucky no one was hurt, just pride and the Lola dented.

A positive in 2009 was the LMS going to the Algarve and running a night race. OK finishing the race at around 1.00am in the morning was mad, it could easily have started and finished a couple of hours earlier and everyone who had to work lost a night's sleep, a bit like flying in cattle class across the Atlantic. That aside it was a great event and we can but hope that it grows into a classic.

Where else can you find a swimming pool in the paddock?

Another positive development was the Asian Le Mans Series which ran with the World Touring Car Championship at Okayama, yes a festive shot for the festive season.

The event was split into two races with the Pescarolo of Christophe Tinseau and Shinji Nakano winning the first. 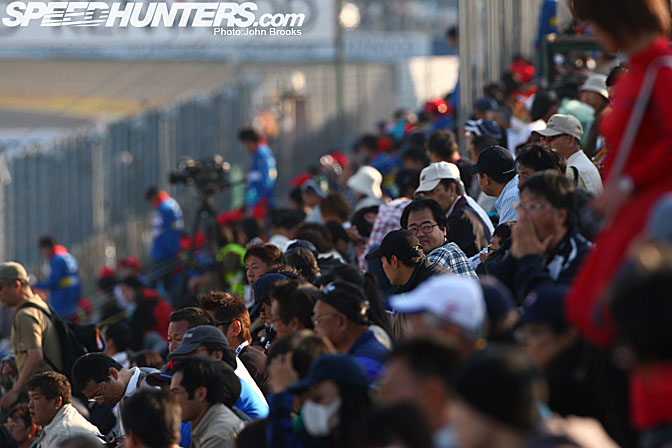 There was a respectable crowd in Japan, hopefully this will start the process of building up endurance racing in the Far East. Japan's decision to abandon Formula One could just the opportunity that sportscars has been waiting for. Maybe the combination of the ultimate sprint racing, the WTCC and LMS is one that should be developed

Do you shoot film?

Fantastic images Brooksie, the Aston at The Algarve is a new contender for your shot of the year!

what gear do you use john

good shoots john didn'y see the algarve race and the okayama race on tv but glad it got good crowds.And i agree with you about AMR especially about the sponsors they pulled in the climate we've had. But i didn't know that the factory wasn't giving them a penny.And will speedhunters be covering the fia gt1 world championship John?

i wish i could actually go to one of these events one day.....

Wow - that shot of AMR 009 with orange sky glowing ominously behind it is brilliant. Could you do it as a wallpaper please!?

That's the one thing about Photography, like every hobby these days. I know someone in the field of Equestrian photography, and they say they "need" 4x EOS 1D's for remote shooting, then the lens on top of those such as her 400mm F2.8 which runs you an easy $13k US.

@efcivicman...........Aston Martin are having a tough time staying afloat like all the premium brand car companies............they have not put a penny into the racing programme for years..........the cars belong to individuals, I think that Gulf Oil, Primat and Charouz own these three prototypes...........but don't quote me...........FIA GT1 World Championship? We certainly would like to cover it in full but as with everything it is a matter of budget, but we are working on it right now.

@John, Is the pushing back of photographers a mere safety issue, or just because of the fact that they can?

@Duncan while Security is always in evidence at Silverstone, they are not armed like Daytona International Speedway, they are not a police force. The issue is one of safety, particularly Moto GP. Le Mans has been largely ruined in the Stadium section since the bikes arrived, trees gone and huge run off areas, iconic shots lost forever. It could be a Tilke track. Even out in the country fences appear with no thought to the requirements of photographers.................you don't need to be in the business long to find out how low down the pecking order photographers are.

At Silverstone GP circuit one of the few dramatic shots that is a frame filler is at Bridge Corner............this is thought to be too dangerous for Moto GP so it disappears...........and that will also be the case for F1 and LMS and FIA GT. Based on what has happened in the past both at Silverstone and elsewhere I doubt if the alternative will offer much to us standing trackside, but finding anyone who cares about that is ike looking for hen's teeth.

To be honest all it will take to get us all banned from the wrong side of the fences will be someone getting seriously hurt or worse and with the idiotic behaviour of some snappers that I observe each year it is only a matter of time. Then the problem will be settled once and for all.