Fastest in the PreQualifyiing Weekend, the mood in the TWR Nissan camp would have been quietly confident. Or it should have been, those of us on the outside would have heard that there had been a successful three day test at Magny Cours, all was plain sailing.

The more observant, not me I hasten to add, would have questioned why the exhaust system had been re-routed from back to side, not something lightly undertaken. The answer lay with annual dust up between the ACO and TWR over interpretation of the rules.

It is completely obvious to anyone who glances at the Nissan R390, it is a road car that has been converted to track use. So like all road cars it will have a luggage compartment somewhere and by the 1997 ACO rules this space would have a volume of at least 150 litres. At this point the story becomes hazy. Some accounts say that TWR "forgot" this requirement, impossible I would say knowing the people involved. A more likely tale is that the original version of the luggage space was flexible but the ACO intended it to be rigid and as anyone who has disagreed with the ACO can attest they can be really rigid when the mood takes them. All that is clear is that the technical department of the ACO, headed up by Daniel Perdrix had the exhausts moved.

Seasoned observers speculated that the affair was the latest chapter in the long running saga of disagreement between TWR and Alain Bertaut.  Mr Bertaut's title as President of the Stewards of the Meeting did not reveal the extent of his influence in every aspect of Les Vingt Quatre Heures du Mans. Getting on the wrong side of this all powerful man could have dire consequences for any aspiring competitor at La Sarthe, as TWR and Nissan were about to experience.

The Dog and Pony show in the Place des Jacobins came and went, teams posed and photographers snapped. Then it was time to hit the track on Wednesday and Thursday to establish the final pecking order. After the fine performance in May much was expected. Wednesday brought disappointment with the cars lining up 7th, 15th and 17th on the timesheets. Oil on the track, heavy traffic, blah, blah blah……..TWR were too good for those sort of excuses. Perhaps I should have paid more attention to the PR release.

R390 GT1 Project Director Kunihiko Kakimoto was optimistic after first qualifying at Le Mans. "Our cars specifications were greatly modified since pre-qualifying and we did not have enough time to test thoroughly. I am convinced that the cars will perform perfectly tomorrow, just as they did in pre-qualifying."

Thursday was better, Eric Van de Poele put his R390 on the second row of the grid with a third fastest time of 3:45.324. Four places back was Martin Brundle and the third Nissan was 21st  after a troubled second evening. This was not the performance that had been anticipated. The team had slipped by two seconds, whereas the the Joest Porsche LMP had improved its time by a similar margin to 3:41.581. The figures did not stack up, something was going seriously wrong.

As the field streamed away from the line to commence the twice round the clock classic it was assumed that things would get better for the race hardened TWR team. Van de Poele in #22 pushed to the limit during the first two hours, leading the race on lap 14 and running in the top five overall for the first three hours, while matching the pace of the other front runners, the Porsche 911 GT1s and the TWR Joest LMP. Then the problems began……………..

"The car was running absolutely perfectly and was as fast as many of the lighter prototype cars which was encouraging. Unfortunately after I had handed over to Aguri Suzuki, there was a split in the gearbox oil cooler. There is a long way to go and even with these problems I am sure we can finish strongly."  was how Eric Van de Poele saw it. 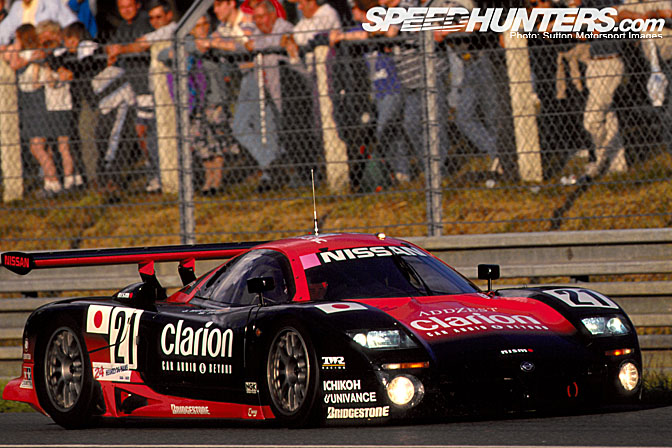 The news was no better for #21 which suffered a repeat of clutch problems that had afflicted it during the pre-race warm up session. After a one hour, 44 minute pit stop to replace the clutch the R390 restarted in 35th place. Within an hour the car was back in the pits to have a faulty gearbox oil cooler replaced.

All the cars were suffering from the same problem. The re-routed engine exhausts were causing the gearbox oil coolers to overheat to the point that the solder on the tanks were melting. This was not a problem that could be sorted out with a quick fix. It was a disaster for Nissan and TWR.

A bit of preventative medicine meant that #23 avoided the worst effects of the oil cooler issue and ran in the top ten until around 1.00am when the afflictions that had done for the other cars finally prevailed. "I heard a big noise and I knew something was wrong with the gear-box," said Erik Comas. "It was thought at first only a change of ratios was needed but the whole gear-box was ultimately changed. At the same time the brake discs and pads as well as a side panel were all changed."  Two hours later Kagayama took the car back into the race but any challenge from the R390 had evaporated. At least they were still running.

During the middle of the #23 pitstop, Auguri Suzuki brought in #22 with "a serious gearbox" problem. Spares were running out and the car was retired to conserve resources for the remaining two R390s.

At 4.24am Jorg Muller limped back to the pits with accident damage to #21, adding to the transmission woes. He explained later, "I agreed with my engineer that we'd go for a few quick laps to try to make up some time, but I hit the apex on the first chicane and ran over the curb damaging the underside of the car. The damage in addition to the gearbox cooler problems made it impossible to go on. It has been very frustrating because without the gearbox trouble the cars have run perfectly and have been very fast. We could have been celebrating a good result here."

What might have been…………….two Nissans down and the Sun was not yet up.

Comas, Kagayama and Hoshino persisted with #23 dragging the car from 24th to an eventual finish of 12th, this despite another gearbox change at Noon.

The transmission problems made the car hard to drive as Kagayama disclosed. "Second gear is very difficult to select and so I have only been using gears three to six, as the other Nissan cars have retired now we are more keen than ever to finish".

Getting across the finishing line was some small reward for all the hard work of the team. A finish at Le Mans is always a kind of victory.

It was left to Kunihiko Kakimoto to sum up the race for the team. "I believe we proved the Nissan car's impressive performance and potential by obtaining the top pre-qualification time. During the race we encountered difficulties that we had not previously experienced. It is however very encouraging that car 23 could complete the race by overcoming all the difficulties. With the experience we accumulated this year, we believe we will be a strong contender for an outright win at this classic race in 1998."

keep up the good work!

Even with all the might of Nissan, Nismo and TWR - they STILL couldn't do what Mazda did!

vortex, no-one should EVER underestimate how difficult a challenge Le Mans represents, and when you've got a governing body as consistently idiosyncratic and recalcitrant as the ACO, you're really up against it. That makes Mazda's 91 win all the more incredible - noone saw it coming!

Mr Brooks, I've got to say, as much as I enjoy the other SH contributor's work, your articles are a cut above. I remember your work from back in the days of the original Sportscarworld.com - I always thought you were only a photographer!!!

I'm primarily a Porsche fan first and foremost, but Nissan has always been a close second, and I was really hoping for these cars to do better than they did at Le Mans. Another fantastic post John.... Any plans to do any retrospectives on the GTP era of Nissans, Porsches, Toyotas and Jags?

Another great post john. Like i said in your other post i remeber the r390 and r391 vividly and remember watching them race on eurosport.And i also hope during this month you will do a retrospective of gtp and group c.

*sits with mark waiting for part 3*