I'm dedicating this second post on the Autumn Drift Matsuri to the first ever "G1-GP," an all-foreigner drift competition that was held at the Nishi (West) course on Sunday afternoon. With so many Aussies over for the event, Andy at Powervehicles.com came up with the idea of holding a little competition, especially seeing the high level of skills these guys had. As soon as he mentioned the idea to Suenaga and Kumakubo they jumped on it and told him not to worry as they would organize everything, including making up trophies, preparing some prizes, getting Video Option to come over and film the mini-event and of course take care of the judging!

What was left to Andy was to hunt down at least 16 gaijins that would be willing to compete in the event, something that proved not so hard as tons foreigners from around Japan always flock to this event!  As you can see from the line-up of cars prior to the G1 kick-off Andy managed to get enough people for a little Best 16 competition!

That's Andy in the center trying his best to do a Stig impersonation.

Suenaga made up a sign telling all Matsuri participants that the "G1 Grand Prix" was officially taking over the Nishi short-course and that entry was prohibited. By the way the "G" in "G1" stands for Gaijin.

Here is the man himself, clipboard in hand ready to get things going.

Christian here was one of the unlucky ones, his car developed a few problems after drifting on Friday, the day before the Matsuri started, which meant he was without a car to drive all week-end. Still he kept us all entertained with his Kangaroo trick and by cooking up a mean BBQ on Saturday night!

Ben MacKerras was complaining his S14 was down on power, yet he put on a great show on every track he tired out, especially up in Kita (North) where he spent most of Saturday night clipping plastic bottle targets that were placed along the pit-wall. More on this on the next post…

Before the action got going Suenaga explained that all drivers would first get a 10-minute practice session and then would be individually judged on their performance. The top 4 drivers would then go against each other in a series of tsuiso battles to discover who the first ever G1-GP champion would be!

I was surprised the Speedhunters.com stickers I put on Suenaga's 180SX at the Summer Matsuri were still intact! I'm sure they have seen some serious action in the last 3 months! His 180SX will soon get painted orange for an upcoming 180SX meeting in Ebisu circuit, and he has already began getting his other RSP13 out of hibernation, which will become his new practice car.

Here is Alexi from noriyaro.com behind the wheel of his new JXZ100, the car that replaces his old R32 GTS-t. Those two Australian flags ziptied to the grill were making more noise than his exhaust!

…but getting a nice smooth drift around the main hairpin.

A wide shot gives you an idea of the layout of the track, after the fast sideways drop down from the hill you have got to flip the car around and set up for the next S-bend before taking the final hairpin corner.

Ken Davis from the US clipping the apex in his C35 Laurel.

As the practice session continued…

…Luke Huxham was out with his camera capturing more footage for his upcoming We Are Drift film. He had to sneak behind some bushes at one point to keep out of the way of the Video Option cameramen.

Drift Samurai dropped by to see what was going on and when the track would be opened again as I'm sure he wanted to get some more practice in with his cool FC.

Kumakubo took out his Evo 9 MR Wagon to the track…

…and used it to judge the drives from with Suenaga next to him in the passenger seat. It was so cold and windy, sitting in the Evo sipping canned coffee must have been a nice place to view the action from!

Rhys Harmon ripped bumpers and trunk lid off his S14 for that raw missile look!

Andy in his JZX90 was ripping it up in his usual foot-to-the-floor style taking first place in the tire shredding-category!

The rear end of Benny Mack's S14 was showing signs of the previous night's action, but amazingly enough still performed well. If you look closely enough you can see I stuck a Speedhunters.com sticker on the mangled rear right corner!

Stuart, who lives very close to Ebisu circuit was driving this black Cefiro, one of the cleanest cars of the group. Notice the Speedhunters.com sticker placement.

Paul is always so happy when he is drifting! He was at Ebisu a few days before Matsuri and was there on Monday too right up to 5 pm, blowing up all the tires he had left. He enjoyed it all so much that he has already said he will come back in April for the next Matsuri….which was pretty much the same sentiment everyone else shared!

After the first round Andy and Alexi along with Shino from ShinoKouba tried to round up all the guys so that Suenaga could read out the top 4 that he and Kumakubo had picked.

…as did Linden Raynolds on board of his C33 Laurel.

The footage the Video Option guys were recording will probably go on a future Doriten DVD. Will be interesting to see what kind of angle they give the event. 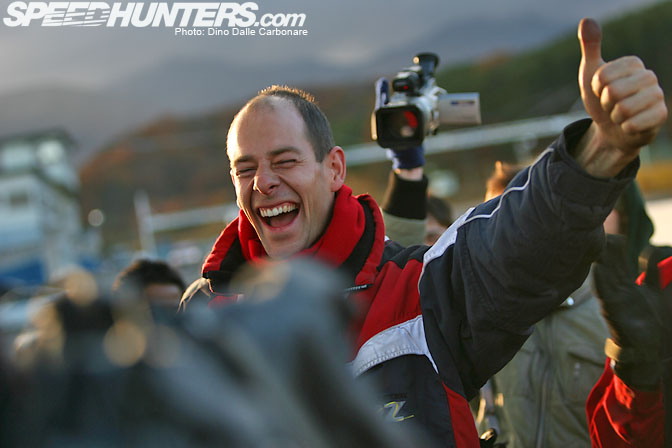 Paul was ecstatic for having made it into the semi's! Alexi joined these three for the tsuiso rounds.

The battles followed, here is Ben and Paul, 180SX vs 180SX! Check out the sate Paul's car is in. Despite the abuse it was subjected to over 3 days of drifting it kept going until the end and Paul will be back driving it in April!

The frozen audience! Gaijins literally took over Ebisu for the G1-GP!

Gratuitous artsy shot of the menacing dark clouds finally covering our only source of warmth.

The other battle was between Alexi in his MarkII and Lindo in the hood-less Laurel….it was all very close…

…but Lindo took the win of the first ever G1-GP. Suenaga though the event was a real success and along with Andy is already planning the next one due to be held the day before the 2010 Spring Drift Matsuri. The idea is to have people compete with fresh cars, rather than after a weekend of drifting, and divide the day in two parts, the morning being dedicated to practice so people can get used to the track and cars, and the afternoon to the competition. Suenaga thinks the Kita course would be a good venue for Round 2 of the G1-GP, and hopes to get more people to come over. Apparently a group is already scheduled to make the journey over from Ireland as well as France not to mention Australia as all the guys that came this time all had a blast. Would be great if this was the beginning of a more international drift movement, something the guys at Team Orange have already began to work on. More to come from the Matsuri so stay tuned form Part 3!

Wow cool pics. got any more of drift samurai's car?

Alexi has a Mark2, which is NOT a Chaser.

great stuff! btw Alexi's car is a Mark II, not a Chaser, i'm pretty sure. the flags were a nice touch 8)

Seems you've stepped back a notch though Benny, I'm just glad you didn't do that to the FD you sold before heading over!

Such a shame this didn't happen for the mid-year Matsuri a bunch of us went too, oh well, always next year.

Great shots Dino so nice to see some photo with out the word flush or low down etc being used.

Was a great weekend filming the G1 and all the other action Matsuri brings, thx for the shot!

Awesome, I wish we had that kind of support down here in Okinawa

"clipping plastic bottle targets that were placed along the pit-wall. More on this on the next post..."

Yay for Ken! I spy Tak as well. Sorry we couldn't be there Andy...duty calls.

Oh well, hopefully next year we won't have to miss out on 2 matsuris for bs work! Congrats on finally getting this together. We have talked about doing something on North Course for a while for a Gaijin Drift Comp, I am glad to see something was put together finally. - Gaijin Smash FTW! (Look Gaijin Smash Bash up on vimeo)

MKII is luxury version of chaser

Car no. 176 was me. Mr Doricar, James Wolstenholme. Be good if you could put my name next to picture. If not, no worries. Be nice to see any more of mine if u have them? Off to YZ Higashi this weekend for D1SL license day. Car is waaaay shagged after Ebisu so in my garage all day tomorrow for freshen up. Engine isn't looking too healthy!

No Tim, you are wrong. This is Mark II JZX100. Chaser have the same interior, same chassis, motors, gearboxes. But exterior is different and they have different spirit inside

its not a chaser but a markII, they don't even look alike!

Pretty cars please. None of this.

Go Lindo go! So proud of you guys! You'd better get back there next year to take it out back to back!!!

Tim: You're a moron. Do your homework idiot.

Awesome pics! looks like a fun event. well done to lindo, SA reppin. do you have any more pics of the tyre x shino is standing infront of? looks good

I'm going to try to make it for this event next year. Is it April?

I've been in touch with Paul and sent him some extra photos. For the other drivers in attendance, drop me an email letting me know what car(s) you were running and ill send all the extra's over. Email to info @ feastautoexport.com

Thanks for shooting on the weekend Dino. Was great to meet you

Hopefully the next car I have across there won't look the same. Time to compete in something a little tidier and better set up

As for those complaining about missile cars......you should tell all the D1 drivers with their missiles that they shouldn't be allowed on camera. After all, pushing the limits the whole time and improving accuracy and driving while not destroying your top of the line competition car makes no sense, right?

Posing and bitching is heaps easier though........

Should be there for Spring Matsuri

i would have like to gone to this. I live in hiroshima and am currently competeing in D1 Street Legal West and south series...

let me know when the next meeting is