Yes Roll up, Roll up!

It's motorsport's answer to the Circus.

Barnum and Bailey on wheels.

The 2009 Race of Champions is underway. It shifted venue from dingy North London to The National Stadium, Beijing, better known as "the Bird's Nest" and familiar to all as the home of the 2008 Olympic Games.

This amazing facility with a crowd capacity of 80,000 is the largest steel structure on the planet.

The Race of Champions has stuck to the traditional format, after a day or two of acclimatisation and practice, the serious stuff gets under way with the Nations Cup. There are ten teams divided into three groups, each with two drivers.

The drivers go head to head in a variety of vehicles, ranging from WRC spec Fords to KTM X-Bows and complete two full laps of the circuit. Sounds simple but as can be seen winter has arrived in the Chinese capital giving an extra bite to the proceedings.

All the Stars come out at night………..actually the line up of Champions is quite staggering:

And this is really the point at which the Circus gets serious, Champions are, by their very nature, competitive people and when you get a bunch of them together sparks will fly.

The first group in the Nations Cup was made up of Germany (Michael Schumacher & Sebastian Vettel), Australia (Mick Doohan & Chad Reed), Finland (Mirko Hirvonen & Marcus Gronholm) and host nation China (Han Han & Dong He Bin). Each country would get two runs against each other and the highest number of wins would go through to the semi-finals, and in Group A so would the second placed team.

Given that Germany's dynamic duo had won the competition in the previous two years they would counted as favourites as the flag dropped. They confirmed that prediction by winning the first six contests, nothing could stand in their way, so it was left to the others to scrap for the second berth in the semi-finals.

Fresh from pushing Sebastian Loeb all the way in the World Rally Championship, Mikko Hirvonen was looking to winning this one.

It was something of a surprise that the Chinese team that joined the Germans in going forward. Good performance by both drivers resulted in three wins and out went Australia and Finland. This was warmly received by the partisan local crowd.

On to Group B. Here there were three teams, Team Autosport GB with Jenson Button and Andy Priaulx.

Team Monaco had qualified from an earlier competition in Southern Europe. They were represented by Emanuele Pirro and Clivio Piccione.

The races in the group were something of a walk over for Team GB, with both drivers winning their two contests and only David Coulthard getting close in his race with Jenson Button. They were through to the semi-finals.

The third group looked the most closely matched and so it proved on the night. Team France had Yvan Muller and Guerlain Chicherit on call.

Team Scandanavia was an all DTM Audi affair with Tom Kristensen being joined by Mattias Ekstrom.

The competition was really hot in this group with everyone pushing hard. In the first race Kristensen clouted the bridge forcing him to retire and lose his battle with Yvan Muller.

Ekstrom had the rear suspension collapse after yumping over the bridge but luck was with him as at that exact moment Chicherit stuffed his car into the solid concrete walls. So even at a walking pace the DTM star was able to complete the lap and take victory.

All of this mayhem did end up influencing the results. As all the teams had two wins apiece a tie break loomed. The rules allowed for all the times of the teams' runs to be considered and as Team USA's Tanner Foust had the fastest time of the group they were through. So last year's runners up, Team Scandanavia, who were highly fancied to win this year, faced an early bath. 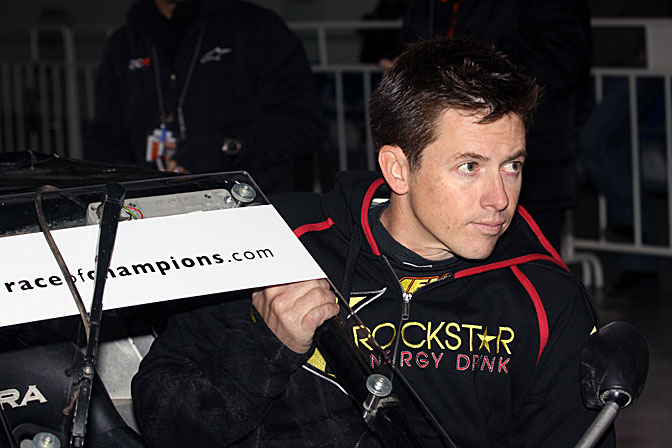 Semi-Final Time! Team USA and Team Germany, best of three……………..Tanner Foust up against Michael Schumacher………..a really tough contest with Tanner .1 of a second up a the halfway point, at the finish he had managed to double his advantage. Big upset looming.

Or maybe not………Travis Pastrana held a slight advantage over Sebastian Vettel right up to the last corner but could not get the power down cleanly, so one all.

In the runoff, Vettel grabbed the initiative right from the start and just managed to hang on to beat Foust, Germany into the final, Team USA's dreams were over.

The second semi final had Team GB up against Team China, a bit of a mismatch you might think but who knows? Race one saw Jenson Button despatch Han Han comfortably.

Race two looked like a repeat performance from Priaulx but then the officials declared that he had jumped the start and gave him a penalty. One All. Button restored the natural order of things in race three, so the old enemies Great Britain and Germany would meet in the final.

The first race was a real clash of champions, Jenson Button and Michael Schumacher……………..

Michael enjoyed a slight advantage during the first lap and he stretched this out to be half a second up at the chequered flag…………..first blood to the Germans.

So what could the Touring Car Ace, Priaulx do about the WunderKid? Quite a bit really, he got a flyer and piled on the pressure and was comfortably ahead when Sebastian attacked the wall and spun off………………so it would all hang on the last race.

Andy Priaulx would take on Michael Schumacher……….it would be close…………

But no cigar…………….the German inched his way in front of the hard charging Priaulx and after two laps of Race 33, Team Germany retains the RoC Nations' Cup in 2009.

Their thoughts turns to the individual competition to be the next day………….who would bet against either of these two?

Photos copyright and courtesy of Race of Champions

What a JOKE. No Surprise to me.

There isn't a bike race is there??? hahahaa

The Australians are Bike racers... HAHAHAHAHA.

Wayne Gardener maybe OK...Pretty good in a car. but Mick doohan has no car skills... You do remember he crashed a few Mercedes in his day.

Where is the Webber and Atkinson

From US maybe Briscoe and Ambrose.

Then you may have a comp.

I must have one of those go-kart type cars.

Whats that Exhaust that the buggies are sporting?

At first I thought it was some kind of rear light.

It's Mikko, not Mirko, Hirvonen. :p

I find it odd that the USA is represented by two drivers that compete in one of its smallest form of racing (rally u.s) and by a driver that contests in something that isnt classified as racing (drifting.)

I think its awesome that Foust and Pastrana do so well though. Shows just how skilled they are at driving. But I think of them as Action sports guys not race car drivers.

But in honesty I would like to see atleast one real racing car drivers from the U.S out there, not action sports hero. Maybe some one with a bit of real racing experience? Like Alex Gurney, Jonny O'Connell, or Patrick Long.

Awesome event. Too bad we wont see it here in the states.Im sure some asshat at Speed would rather show NASCRAP qualifying or one of those dimwitted shows the have like Jacked or WRecked. At least they got rid of that douche bag on Unique Whips!

well Tanner Foust isn't just a drifting champion, he is also one of the best time attack drivers in the world. Because of these skills, I believe that if Foust were to be put into a ALMS car he would be extremely skilled and do well. Its just a matter of time before this happens and Tanner shows his true talents.

"I believe that if Foust were to be put into a ALMS car he would be extremely skilled and do well. Its just a matter of time before this happens and Tanner shows his true talents."

Wrong. He might show some decent pace in qualifying, but I dont think he has ever gone wheel to wheel with anyone else in a professional race. There is a HUGE difference between the two.

Driving fast for 1-2 hours with tons of traffic going at different speeds while battling other people in you're class is another thing entirely.

tanner & travis where my favorites;)

Be better if they had an Aus/NZ team. Webber and Dixon would be a sweet team and it'd give me a Kiwi driver to root for up against th F1 greats!

yeah i think they couldve picked better drivers for team america,IN MY OPINION pastrana and foust are good but pastrana i think is a little to crazy to be doing this type of stuff which would explain why "he couldnt get power down cleanly" , foust i cant really say anything bad about hes a damn good driver. that and there going up against schumacher... are you f-n kidding me? i wouldnt challenge him to a race on rollerblades.

watched this on british eurosport. wouldn't call the roc a circus though is rather motorsports answer to the waste of a month they call the football world cup. button and priaux did well in the nations and the individual events...honestly motorsports needs more events like this. And i do agree it would have been good to see webber,lowndes,whincup for the aussies and murphy for the kiwis. But perhaps they where busy who knows?

Whats up with the buggy exhausts?

I agree that team America could have put down some better drivers, but Foust and Pastrana are amazing drivers, i'm sure much better than any of us here. The other nation's drivers seemed to have such a larger advantage, probably due to their nationality.

In Europe, the premier driving sport is Formula 1, and it produces the best drivers in the world. The premier American motorsport involves driving in a circle. As Americans we did good, but come on. We do have a bit of a disadvantage.

I would not diss motocrossers just yet. In our local (Latvia) version of the Champions Race all the local car racing mega stars, stars and starlets were DESTROYED by motocrosser, former motocrosser (currently off road buggy driver) and drift driver. Off course it speaks volumes about our local car racing scene, but still...

Considering that this years "action sports" drivers from the US faired as well, or better than the "professional" drivers we sent in the past (Jeff Gordon, Jimmy Johnson, Casey Mears, etc...) It's hard to argue against them. Not to say the the aforementioned "pros" are not great drivers, but they are, as Rdmndrifter said, circle track drivers. Their biggest advantage comes in their smoothness and endurance, not so much their ability to adapt to different vehicles and handling characteristics. Tanner and Travis are subjected to a strange and specialized type of car control . Couple that with the fast paced circumstances in which they have to perform and it makes them perfect candidates for this type of event. If I were to swap out anyone, it would be Travis. His car control is great, but he does seem to get a little excited some times and it shows in hit lap times. Instead, I'd probably send Marcos Ambrose. He has his V8 supercars experience as well as his experience in Nascar's various divisions. He also ran some Daytona prototype in Canada and seems to adapt to different chassis rather quickly. Other notables in my book are: Scott Sharp, Juan Montoya, Peter Cunningham, just to name a few.

would love to go watch this live one day

i bet the sounds inside the staduim are incredible