Can you imagine what qualities were needed to be THE top racing driver of the 60s. Big hair, wolfish smile, Mediterranean suntan, hairy chest on display, dolly birds on either arm…………in other words a regular Carlos Fandango and yet it was much simpler than that……….all you really needed was a Scottish accent and a wee bit o' tartan.

Jim Clark was acknowledged by all his contemporaries to be the best during his reign in Formula One, he was the leader of the pack, absolutely no doubt and his record supports this assertion. Jim Clark started 72 Grand Prix, 33 from pole position, won 25 races outright racking up 27 fastest laps and in process was crowned Drivers' World Champion twice. The numbers do not lie, this is an incredible set of statistics. The Times ran a piece earlier this year listing out their top 50 drivers of the modern era, number one was……….yes, you guessed it Jim Clark.

What's more he raced only for one team, Lotus. His relationship with the flawed genius that headed the company, Colin Chapman, was more akin to brothers than employer/employee. Here they celebrate victory in the 1967 US Grand Prix.

Jim Clark was a shy, quiet farmer from the Borders region of Scotland. His persona in and out of the car could not have been more contrasting. At the wheel he was committed and decisive, outside he was much less so. Clark and Jackie Stewart shared an apartment in London when Stewart was at the beginning of his career. He observed "We would leave Balfour Place for a quick meal before going to a movie…….Jim would drive from one restaurant to another before choosing where to eat. By the time we had gone through this palaver we had missed the start of the film."

He began his Grand Prix career in 1960 at Zandvoort, Holland. Here Clark is pictured on his debut with team boss, Colin Chapman and fellow Lotus drivers, Innes Ireland and Alan Stacey. Stacey was killed at the Belgian Grand Prix two weeks later in a bizarre accident when a bird hit his head during the race causing him to crash into the trees. It was an early introduction for Clark to the dark side of Formula One.

Despite the fact he hated the old Spa Francorchamps track he won the Belgian Grand Prix four times in a row experiencing all manner of weather conditions. Here he vaults from 8th on the grid to the lead by the time the pack gets to Eau Rouge.

Like all the other drivers Jim Clark would race anything, here at a support race to the 1960 Silverstone Grand Prix.

Clark also had a good record in sportscars, trying to get various hairy Lotus projects to work. This Lotus 30 Ford was a bit of a handful. 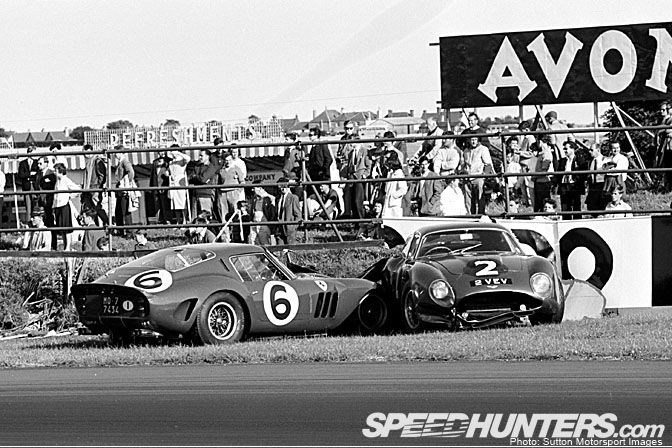 It was however at Indianapolis that Clark really made his mark outside Formula One. In 1963 he went for the first time and but for some dubious USAC officialdom should have won the race, second on his Rookie year was a fair achievement. In 1964 he was leading by a country mile when tyre failure caused the rear suspension to collapse and he was out of the race.

1965 saw Jim Clark win the Indy 500, the first foreigner to do so for 49 years and the following year saw him second once again, this time to his countryman and future team mate, Graham Hill. Typically for the event at that time there was a dispute about the lap charting with Lotus convinced that they were actually the winners, no one emerged with much credit for the situation but the USAC position prevailed.

Back on the Grand Prix circus, three wins in 1962 were followed up by seven in 1963, with the title secured here at Monza…………..not the way they do parade laps these days.

In 1965 Jim Clark won 6 out of the first 7 races, the missing weekend he was winning the Indy 500. The title was clinched at the Nurburgring.

For 1966 the Formula One rules changed and Ford decided to finance the building of the iconic Cosworth DFV. It was ready in early 1967 and of course Jim Clark and Lotus were the target. The new car, the Lotus 49 won first time out at Zandvoort but despite being faster than the opposition there were reliability issues. At last Clark had a car worthy of his talent.

The 1967 Italian Grand Prix was also possibly the greatest race in Jim Clark's stellar career. He took the lead soon after the start but suffered a puncture almost immediately and lost over a lap getting the tyre replaced. He then set to, running at pole position pace for the remaining 50 laps to the point where he not only made up the ground but blasted past the leading pair of Jack Brabham and John Surtees. The above shot shows him in the lead with just 5 laps to go to the finish. However there was no fairytale as going into the last lap the Lotus 49's Cosworth DFV coughed as the pumps struggled to pick up the last litres of fuel, so halfway round the track he was passed by eventual winner Surtees and then Brabham. Third place seemed a poor reward for such a drive, even "magic" fails sometimes.

1968 came and another win for Clark and the Lotus 49 at the opening round in South Africa. A third title seemed likely as the car had most of its faults ironed out. Then Colin Chapman asked him to go and race a Formula Two Lotus at Hockenheim.

It was a miserable weekend, the car had a semi-permanent misfire and the Firestones did not like like the damp conditions. The race was over two heats and on the fifth lap of the first heat Clark's Lotus, running well down the order, left the track at high speed in the forest section, hit a group of trees, killing him instantly. The cause of the accident was never absolutely determined but the consensus of opinion is that a tyre deflated suddenly, most likely as a result of a puncture and from that point even the great Jim Clark was just a passenger.

The effect of Jim Clark's death on the sport was nuclear. The other drivers felt as if they had lost their leader. As the Ferrari number one, Chris Amon put it later "If it could happen to him, what chance do the rest of us have? I think we all felt that. It seemed like we'd lost our leader."  Similar thoughts were freely expressed in the paddocks around the world.

It was a very dangerous time for top line drivers, in 1968 another three Grand Prix drivers lost their lives in racing accidents. If one looks down the list of the 25 drivers who entered more than one race in 1968 a further 8 were killed on the tracks in subsequent years. The loss of Jim Clark was a grim reminder of a drivers mortality and spurred on a new campaign to take the needless risks out of motorsport.

When researching this feature I read a snippet in Eric Dymock's excellent biography "Jim Clark" which summed up the universal appeal of the man…………..

" A disk jockey on a radio station in far away Los Angeles said: "If you are mourning the death of the great driver Jim Clark, put on your headlights." The whole freeway lit up at midday."

GP & The Man Articles on Speedhunters 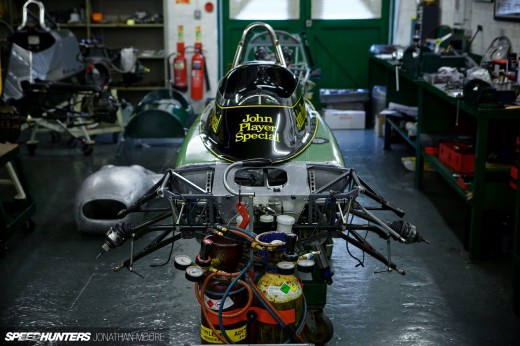 The Real Deal:
Stripped Down At Classic Team Lotus 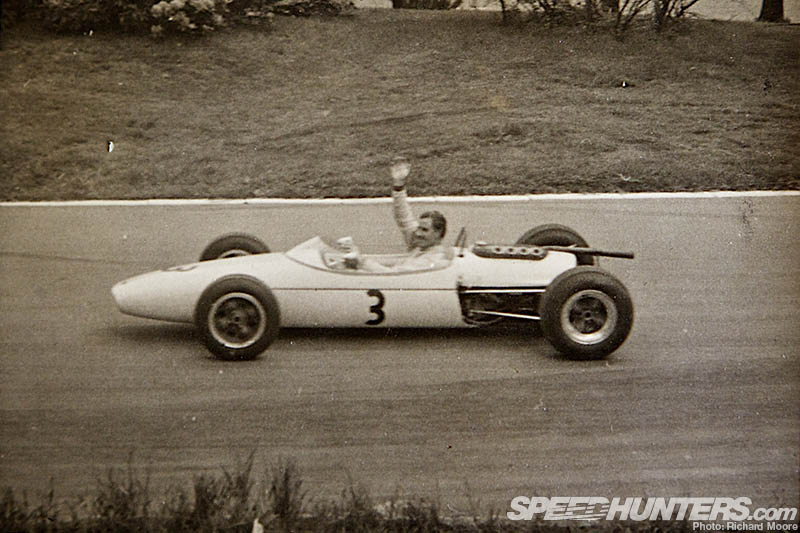 Well written article. I would like to see more Formula 1 inspired articles on Speedhunters as it is my favorite between class site.

I'm not sure if it's just this story, but Mr. Brooks, you sure bring a nice touch of pro-jurnalism to Speedhunters! Nice, clean, well researched,planned and put together stories. Good selection of pictures as well. With this story, I'd say this is top notch work! Thank you so very much and please keep it up!:)

A great article for the greatest driver of the 20th century. Maybe the greatest we'll ever see. He still inspires drivers today, such as Dario Franchitti.

In todays money there is about $20 million worth of cars sitting all bent out of shape right there!

Is it possible to get a desktop of Clark crossing the finish-line at the Nurburgring? That's a classic shot.

Great read, I love the nostalgic stories on Speedhunters.

@everyone many thanks for the kind comments, especially Chris Davy........more of the same planned but some family matter has to come first and then FIA GT Zolder.....so the rest of this series next week............jb

JB - excellent third post in this series. As a Scot I probably view Clark through tinted glasses but for me he's my favourite. Not the best record in the world but it never tells the full story of the man's genius behind the wheel, and any wheel at that. The Chris Amon comment always brings a wee lump to my throat.

Mr. Brooks, this series has to be the most well written and enjoyable series of posts on Speedhunters since the sites inception. How can the new generation of drivers live up to such immortal figures as these, the greatest of racing drivers? I think the pic with the Minis says it all: Jim Clark, Graham Hill, Bruce McLaren. We will never see men such as these again. Also, the 1967 F1 cars have to be, imo, the best looking grand prix cars in history, the last year free from aerodynamic modifications, plus the stance of the skinny front/ humongous rear tires are legendary!