Speed Month on Speedhunters just wouldn’t be complete without a look at the one and only German race track built for the purpose of all-out top speed: Avus. This is a temple of speed which will forever be linked with the pre-WWII era Auto Union and Mercedes Silver Arrows streamline Grand Prix cars and even the creation of the Autobahn itself.

Although planned out as early as 1909, Avus opened in 1927, just on the outskirts of Berlin, as a 12.160 Miles or 19.569 km two-way blast through the Grunewald forest. Think of it as a freeway connected by two corners… It was the first section of the now famous Autobahn German freeway system to be constructed but was also designed to have a dual life as a motor racing venue. Let’s ponder this for a second… the first section of the Autobahn to be completed was also a racing track!

This is a shot of the old South Curve at the bottom part of the circuit.

Remember this is the era before the great Nurburgring was constructed…. so the Berlin track instantly became the center of Germany’s racing activities.

It’s interesting to note that both Auto Union and Mercedes used Avus as a venue for land speed records and soon rebodied their Grand Prix machines with streamlined bodies in a quest for all-out top speed…. but before we get into too much of a history lesson, let’s jump forward to present day.

If you were driving your car down the Autobahn 115 out of Berlin you would probably be more interested in the fact that this was once the road that connected West Berlin to West Germany during the cold war… but an observant person might wonder why on earth a large grand stand would be situated on the side of the freeway!

Let’s look at Google Earth to see what we can see. On the left side of the frame you can see the grandstand building, which, according to Wikipedia, is now a protected building….. we can also see a remnant of the old race track… the North Curve and what seems to be the paddock area… it also appears that someone has made a few RC Car tracks on the old racing surface… good to see it’s still in use in some capacity!

As we zoom out, we can see Avus’ North Curve is surrounded by a big freeway interchange system.

Zooming out even further, this is in fact the whole original 12 mile track… it seems a bit insane now doesn’t it?

By the 1930s, the Nurburgring Nordschleife had eclipsed Avus as Germany’s premier racing circuit so the organizers hatched a plan to make Avus into the world’s fastest race track. Racing was halted on the circuit for the 1936 season in order to reconstruct the north curve into this act of madness….

In order to visualize how crazy this banking was, someone posted this chart onto Wikipedia. You can see just how much more steeply banked it is compared to the steepest of steep… Daytona… The Avus banking was on a whole other level.

The brick surfaced corner was quickly dubbed the wall of death as it didn’t even have a barrier around the outside… if you lost control in this fearsome corner, well that was certainly the end of your days.

Nonetheless, in 1937, the Mercedes and Auto Union Silver Arrows ventured out to race each other on what was now the world’s fastest racing track. The race was won by Mercedes driver Hermann Lang in his W125 streamliner. Amazingly, he clocked an average race speed of 260 km/h… a record which was not eclipsed at Indianapolis for another three decades. 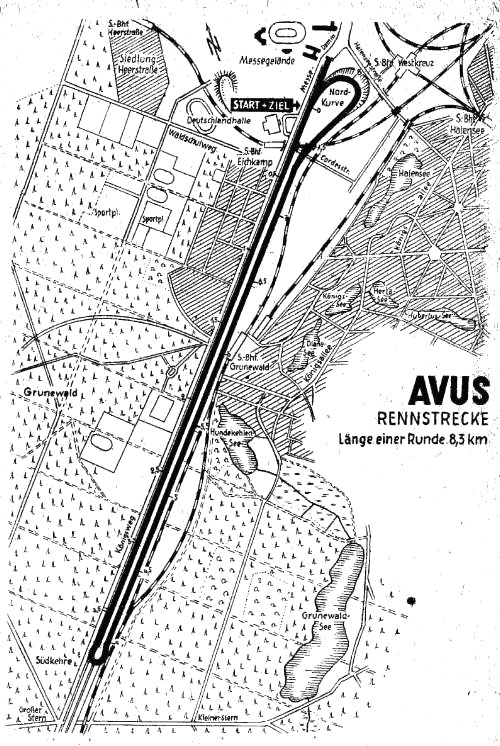 World War II brought an end to racing at Avus and it wasn’t intil 1950 that racing commenced again at the site, albeit with with a new 5.157 Miles or 8.299 km shortened layout.

Returning again to Google Earth, we can see the remnants of the new South Corner… it’s still there, although I would imagine it goes unnoticed by the average German commuter.

Here’s a shot of the very same corner from the only Formula 1 event held at Avus: The 1959 German Grand Prix.

Needless to day, the F1 drivers of the day weren’t very pleased to be racing on the brick surfaced banking, it was already considered to be too dangerous for its own good.

Guess what is about to happen here, yikes!…. Considered to be too much of a health hazard, the banking was finally demonlished in 1969 but racing continued at Avus and included series like the DRM, DTM, Interseries and the Supercup for Group C cars up until 1998. By then, the new unification of Germany meant it was just too costly to shut down this important Autobahn access point to Berlin… and continued safety issues meant that it was just no longer possible to keep racing on this stretch of freeway.

So if you are ever passing through Berlin, perhaps a pilgrimage to this temple of speed is in order…. The grand stands are still there and so is the flat version of the North Curve. You can also enjoy some lunch at the old race control tower which is now a restaurant and motel.

The era of the great German Streamliners is very quickly passing out of living memory, but at least for us motor fans a few remants remain of their old battle grounds…. I know next time I pass through Berlin, I’ll have to check out the remains of Avus and cast my thoughts back in to an era when land speed records were still conducted on roadways. Thankfully we still have Bonneville and new standing mile events are springing up across the US, but there will never be a place like Avus again.

Other Temple of Speed stories

The History of the German GP

Wow now I regret not visiting this when I lived in Germany. Thanks SpeedHunter Chong, I now have regrets..... J/K

Great article at the conclusion of speed month....Auto Union and Benz were at the forefront of speedhunting!

That first picture is an absolute masterpiece. Perfectly captures the essence of racing at the time. A very well done article.

Rod , the subject is very well done and very pleasant to read , except one little thing : Your comment on J.Behra fatal accident sound a bit "displaced" like we use to say in France.

Just like if i read something like " Ouch ! gonna hurt !" under a picture or a video capture showing A.Senna last seconds of life.

Phenomenal article! This place is so cool... I cannot imagine driving past the grandstands and not wondering about them....

Definitely a diffferent time in life.

Hi Markus... I was being serious with the J.Behra image and selected it to show the extreme danger of the banking... hence it being dismantled.

Hope all is well with you!

I'm not a specialist at all , but from what i know this one of the 2 pics taken during the sad day of Jean Behra's fatal accident.

@ Rod : Of course i know you're a serious , but i'm affraid that my poor knowledges in the Shakespeare's language add some distorsion to your comment , specially the...." Yikes !" i'm not sure about the translation of this , and i read it as a kind of cartonish " Ouch , Aiiie , or Bing...?" That's why i find it a little bit disrespectfull for the memory of this great champion.

Btw , Behra was not killed because his car jumped over and outside the track , but because he hit a big piece of concrete ( ex Flack support ) standing on top of the track. The car stood on top of the track , only the unfortunate driver was ejected....end of story is pure horror , no need to pollute more the ambiance.

Maybe because i live in Nice , the city where Behra borned , and still is very famous , i'm a bit "sensitive" , sorry for this , but once again your article is superb , and like many others , give to SH is unique style.

For all of you interrested , here's my main source : http://www.autodiva.fr/forum/viewtopic.php?f=2&t=555&start=0

This was an awesome article! I never get bored checking out this place

Great article, such a shame the banking was demolished. I wish it was kept as something like a memorial to all the drivers who raced there.

Taking nothing away from current F1 drivers, but the the drivers from that era i find amazing, Fangio, Moss, Hawthorne, Ascari, ......

In Need for Speed Prostreet there was a speed challenge that was in teh Autobahn and there was a section that had banking like this. Just thought id say that seems pointless, anyways great article, awesome that we can still look back at the different era's of racing and the tracks that were more race oriented than safety.

For those who consider automobile racing to be dangerous now, take a look at racing on this track, especially on the 3rd to last picture! These guys were racing cars at speeds over 170mph with brakes that were as reliable as cheese!

Remix... well spotted.. that track was "inspired" by Avus

Awesome article!!! Please can we have one on the Nürburgring Nordschleife!?

@ marcus nissa: you translated "yikes", properly, and frankly, from the comment, I simply assumed that an anonymous driver had a scary moment, not that a national hero lost his life. So I agree with you, especially considering his French stature. I've never seen a photo of Levegh or Hawthorne at Le Mans in 1955 with a Wil E. Coyote type quote capturing the scene. However, none of were alive then, and the photo doesn't highlight Behra's face, and so it doesn't project the emotion that a more personal photo might. And, of course, Rod obviously didn't mean any disrespect. But I do get your point.

@ anyone: what was the banking angle at Monza before it fell into disrepair?

BTW according to this article the banking spin photo is a Dutchman named Carel... he was not injured in the shot.

Thanks for the update Rod , this event is related in the Autodiva thread , but seem that there's a bit of confusion about the different pictures ( Behra , Godindebeaufort or a 3rd Von Frankenberg....) , event for the "specialists" of this era.

I'm ready for comenting the Targa Florio thread you've in the pipes :)))...... Specially if it's illustrated with some very rare pics.

As a student of speed history i commend you and your fantastic work. Thank-you

Fascinating article and a great read. I'd heard of Avus, but didn't know much about it until i read this, thanks! Posted it on Facebook for my fellow petrol heads!

Hi Rod
Please simply comment that the
"great stream-liners era" is closely connected to Nazi era, and do not
cut the nazi flag as you did on some pictures of the tower. Historical facts. The reader must remember that the black days of
Germany happened in parallel to this