My name is Gabriel Tan, I am born and raised in Singapore, having followed the local performance car scene over the years, aided by the fact that my dad used to run a car repair shop.

Singapore's tuning scene is very active, with many garages and outstanding modified machines as well as an abundance of exotic supercars including the R35. I think Singapore probably has the highest density of R35s in the world. The
new GTR isn’t an official import for Singapore but given our proximity
to Japan, the business acumen of parallel importers and the relatively
low price of a GTR, that means our streets are crawling with them. Last
I know, we have over 400 (!!) of the latest Godzillas in a country
smaller than New York City.

You can read more about Singapore's tuning scene on my blog Carbon Clad Cars.

The blog is written together with my buddies Jackson Lim and Julian Poon. Jackson’s I.T and design skills jazz up the blog while Julian is an avid freelance photographer, with the photos in our first Speedhunters contributed article taken by him.
Personally, I am more of a Japanese motorhead and my daily driver is a Nissan Silvia S15 (pictured on the left). I have owned and modified it for the last 3 years or so, with power currently at just below 400 ponies.

Formula Drift was held for the second time in Singapore last Sunday after the inaugural event in 2008.

This year’s event took on more of a grass root feel, with 37 top-level amateur drifters from Singapore, Malaysia, Indonesia, Thailand and Hong Kong. 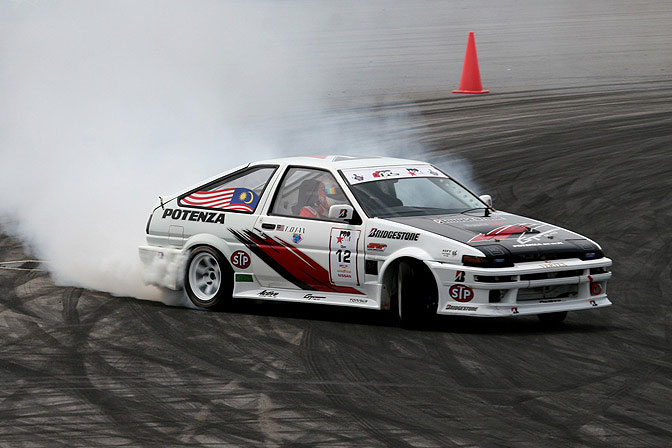 Notably absent were Ryuji Miki and Mad Mike, who took 1st and 3rd last year but 2nd-placed Tengku Djan from Malaysia was present with his diminutive but mighty AE86.  You might also recognize Djan from his appearance in D1 Grand Prix's 2007 "World All-Star" tournament at Irwindale Speedway where he placed 4th.

The new 370Zs have already hit Singapore in force and they are starting to fill up our roads. 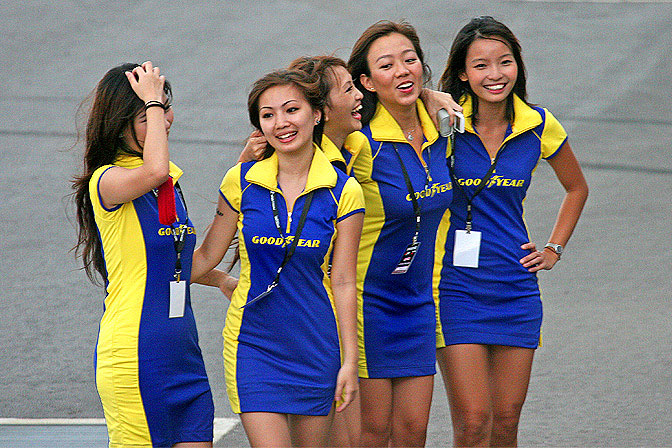 Goodyear was one of the sponsors for this event and their promo girls were out in force. 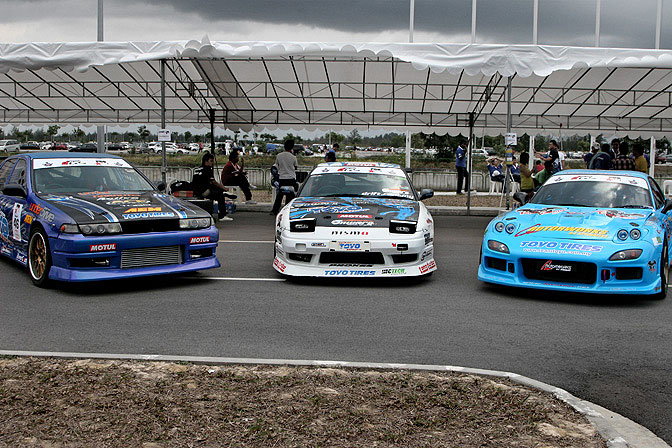 In the pits, many of the teams show off their cars. Styling of the drift cars borrows heavily (if not entirely) from Japan as you can see here. 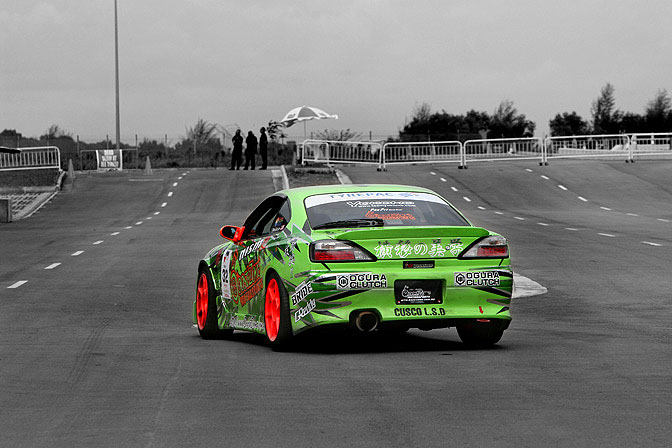 One of the competitors from Boostzone in Malaysia. This S15 owner is likely not a shrinking violet with the orange rims and green paintwork. 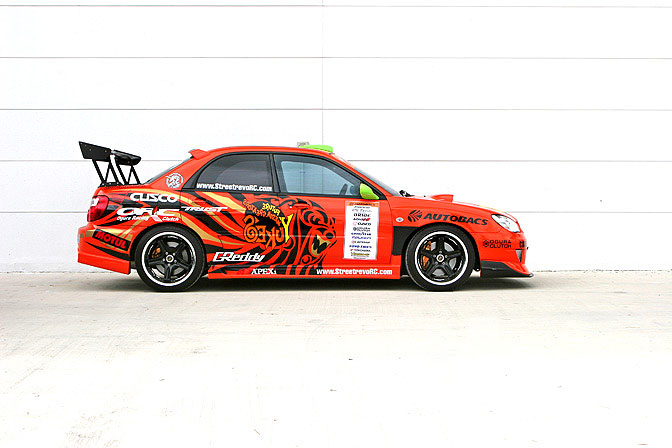 I did a double take and almost thought that Team Orange was in town. Upon closer inspection, it’s just a Singaporean practicing the sincerest form of flattery with his car. 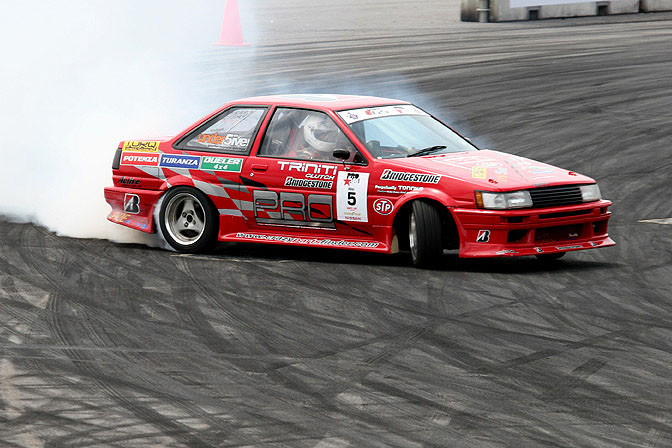 The circuit this year was more compact and technical versus last year and this reduces the entry speeds significantly. The top speed was 104km/hr last year whereas it’s only 87km/hr this year by Tan Tat Wei, though it does speak volumes of his intestinal fortitude when there are plenty of higher-powered cars going slower. 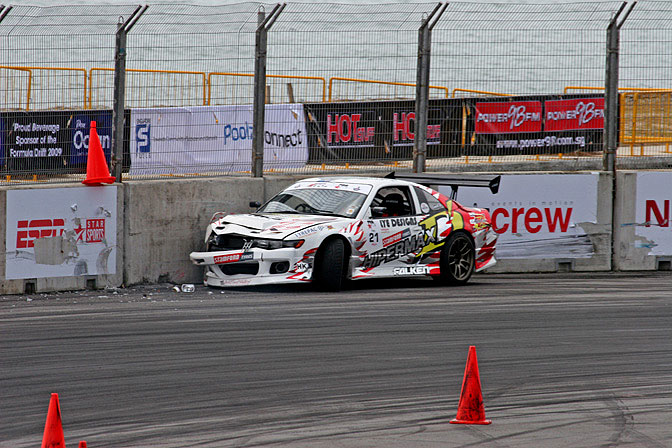 Tighter circuit plus amateur drivers usually result a crash here and there. Especially during the qualifiers. 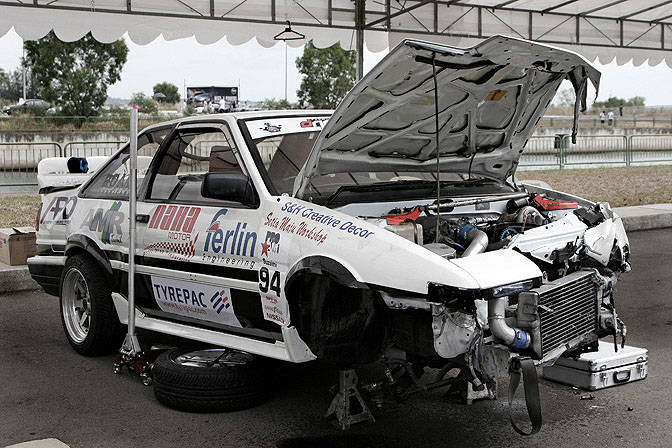 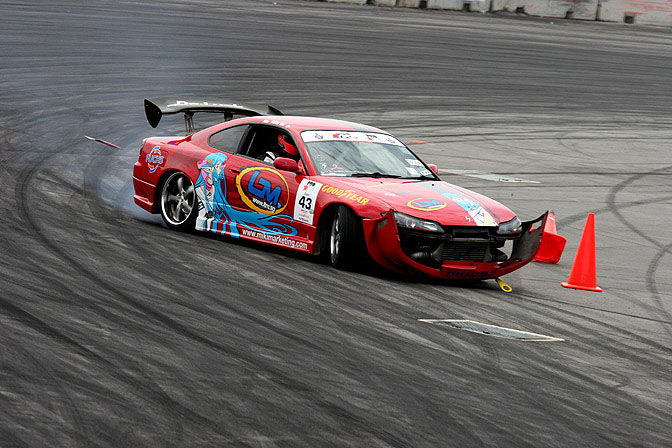 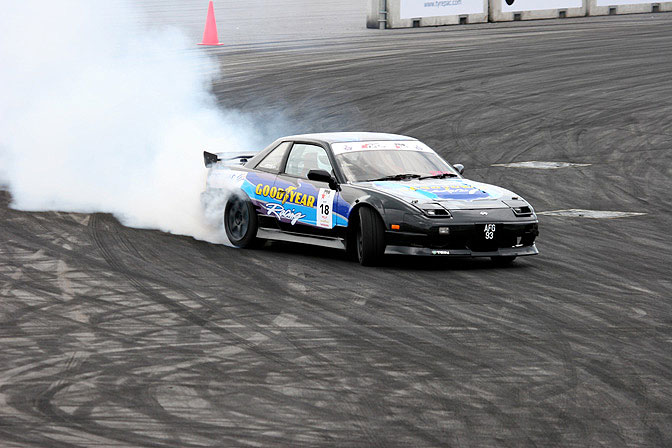 Within the top 16, the standards picked up immensely. Ariff Johanis, the eventual 3rd place winner, carries good speed and huge amount of smoke throughout his runs in his understated 180SX. 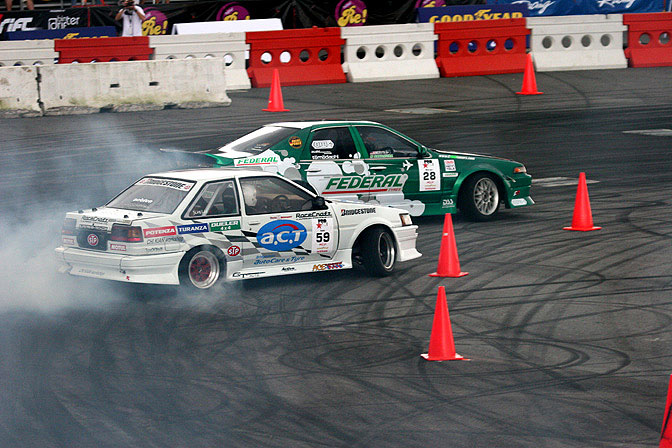 In a close battle of the Toyotas, Ivan Lau’s Hachi Roku took out Mervyn Nakamura’s A31 Cefiro to proceed to the top 8. 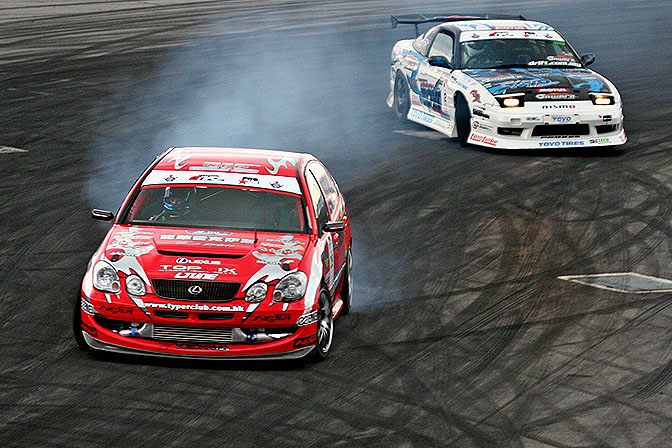 In another top 16 battle, this rather uncommon choice of a Lexus Aristo from Type R Club in Hong Kong with mega bucks mods (I spotted a 2JZ and HKS T04Z in its engine bay and monstrous Alcon 6-pot picks up front) did battle with Lim Zee King’s white 180SX. Unfortunately, the driving was rather uninspiring, with the luxo-barge dispatched quickly by Zee King. 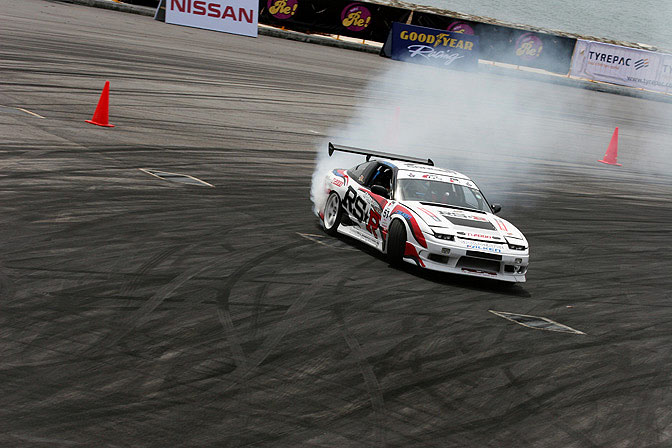 Yet another 180SX, this one is piloted by Singapore’s very own Jansen Tan. He ended up the highest ranked Singaporean in this competition with a top 8 finish. 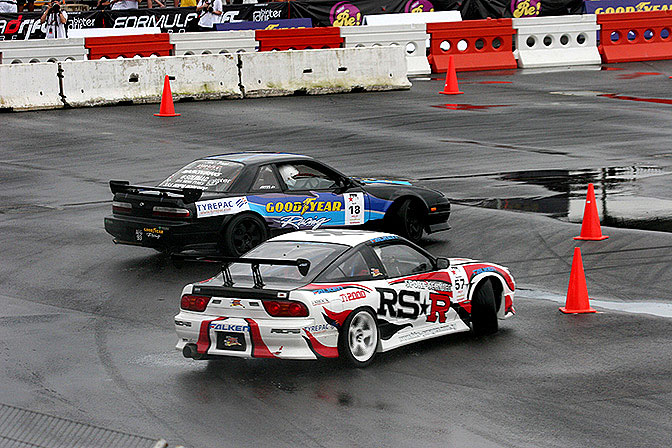 Jansen was taken out by Ariff who managed to get away after the second clipping point. Ariff went on to face Tengku Djan in the final 4. You can see the track is rather wet in this photo, as halfway during the top 8 round, it started to rain heavily and competition was halted for a while. 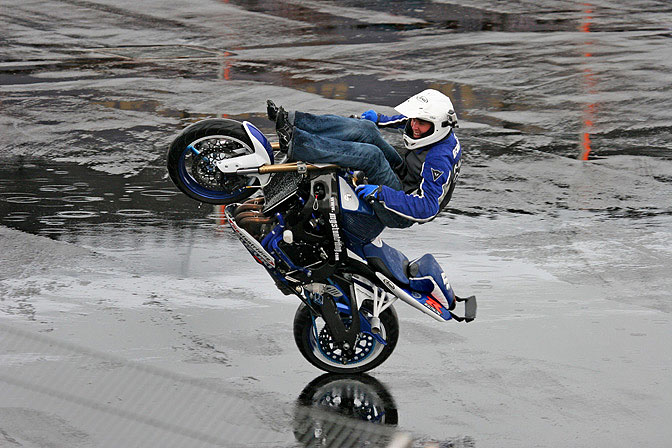 A little moisture didn’t stop Irish daredevil Mattie Griffin from coming out to keep the crowds entertained with an amazing performance. Nothing like a legs-over-the-handlebars-wheelie IN THE WET to show that you got skills! 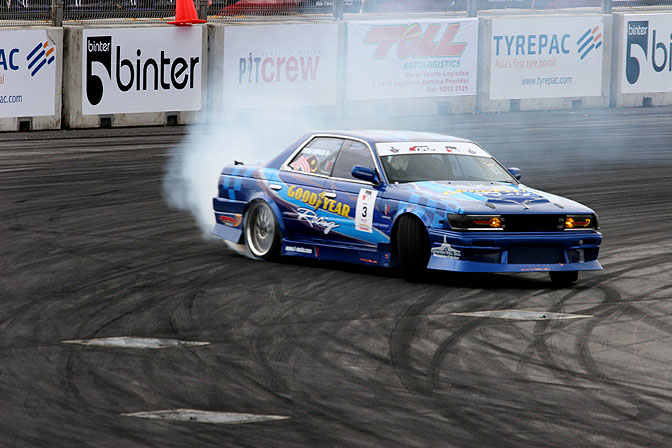 Another attention grabber throughout the competition is the Nissan Laurel piloted by Johan Azam. If you don’t see it in person, you wouldn’t believe that a 1980s four door family sedan is competitive and agile enough to make it to second place in a Formula Drift competition. 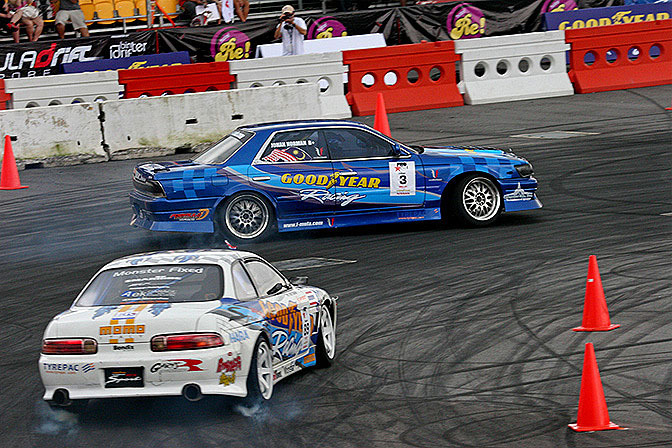 Here’s another shot of Johan’s Laurel getting away from Nakorn Cotraviwat’s Soarer during their Top 16 battle. 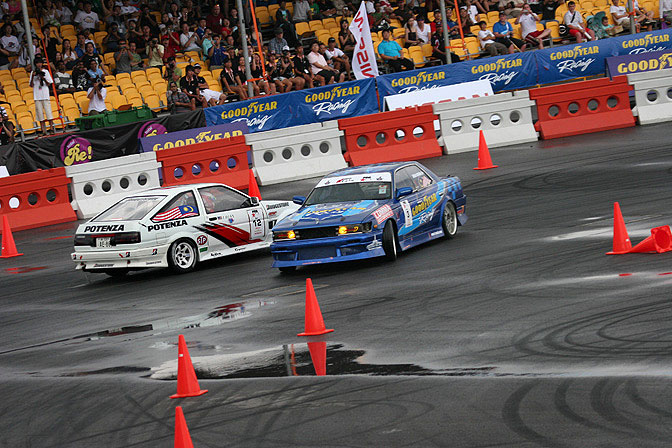 In the final battle, Johan was taken out convincingly by ‘Tandem Assassin’ Tengku Djan. With only a bee’s pointy end separating the two cars when Johan spun out, Djan narrowly managed to avoid t-boning Johan and overtook to win the 2009 Formula D Singapore championship! 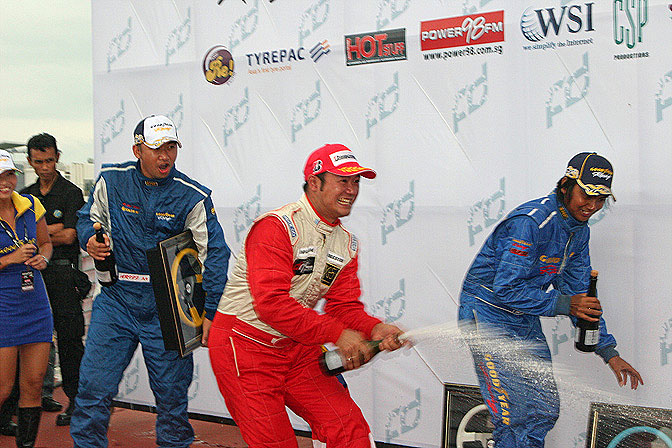 In the end, it was an all-Malaysian podium with champion Tengku Djan celebrating with the customary champagne shower. Runner-up Johan (right) and second runner-up Ariff (left) look happy just to be out of Djan’s way.

With Goodyear and Formula Drift announcing that they will be extending competitions to Thailand and Malaysia in November and December, it looks like we’ll be having more drift action ahead in Southeast Asia for a while. Stay tuned for more Formula Drift Action from this part of our world!

hmm, much crashes, for rain? here in Slovakia we have luck for rain, every round we have wet track... but we dont have any crash. But: nice blog

that green s15 in the ninth picture is hawt

I love Singapore! I got to go there last October and I agree, tons of tuned cars. Especially Fits, Mazda 2's and the like. Guess where I saw my first GTR? Yep, in a Singapore parking garage. I love how everyone parks "smart" with the nose pointed towards the road. They back into spaces! Good memories of the people. Also saw a newer Civic Type R sedan too! More from Singapore!

Love it bro...beautiful pictures I love it!!! Thanks for bringing us this....

Hey man, an A31 Cefiro is a NIssan, not a Toyota. I know you know that, just a typo. Good write up and photos BTW. Thanks.

The Orange Subaru is a drift ready machine... Not just for show... fyi...

Fantastic read, and yes that green/orange s15 is sexy. Your car is very nice too

I <3 Singapore and all it's dopeness! Malaysia has tons of rad cars too; but more older cars. Can't wait to get back over there next year! Great post!

Excellent article! Its good that our local scene is getting more publicity. Hopefully the motorsport scene wil get stronger and stronger in preperation for our new track,

You are all so kind. I am chuffed!

my mums from singapore..and last time i was there..the lamborgini club had a meetup at the hotel car park!..

a sight and sound i will never forget!

Enjoyed the write-up and awesome pix, Gabriel. Almost as good as being there myself!

No, the team orange is not ready 4 drift yet..not yet full tuned..he's goin 4 nxt yr's event..

I am a Singaporean myself... but sadly, i did not go for this year's and last year's FD Singapore, due to exams... :[

I felt that the tuning scene in Singapore is nothing as compared to Japan or even Malaysia... There are tons of poseurs trying to mod their cheap ass cars into stuff like evo and STI... And its like a place where many lancer owners (those cheap ass lancer glx) love to mod their cheap lancer to look like an evo... Or even weirdos who like so stick several tuners' stickers or auto parts brand stickers on their car, even when they are not powered by those stuff indicated on their stickers...

Nice write up Gabriel. Certainly enjoyed looking at the event from your perspective. Yeah, I was quite surprised seeing the event getting wet halfway through (watched on Youtube yesterday) and see how a lot of drivers were struggling in the wet. Congrats to Tengku Djan on yet another win, as well as Johan and Ariff on the podium.

There will always be poseurs and ricers everywhere, be it US or Japan or Malaysia or anywhere else with an import scene. Its just that you are not on the ground over there to see the 'auto eyesores' as you do here in Singapore. Their magazines/websites will hardly feature these lousy cars right?

When was the last time you went over to ST Powered to look at their Evos and GTRs or Monster Garage to look at their RX7/8s? If you are truly in our scene, you will know there are many incredible cars, which unfortunately has to keep a low profile because of police attention.

Lastly, exams are important but if you can't even spare a day from studying to watch the FD finals two years in a row, you are either revising right at the very last minute everytime or you are just not really into motorsports or cars for that matter.

gud to see an irish lad in the middle of things even if he wasnt drifting.. up on 1 mattie...lol

anymore shots of the white soarer

cRu3l+y, don't go to ST powered. It's a little out of the way and you'll need a car and a driving license to get there(Are you legal yet?). I'd suggest Autobacs. There's a bus stop right in front

Nice one fellas! I'm from Singapore too! Interested to write about the old school Japanese car scene in Singapore?

damn you guys are putting it down over there

Yeah, Way too many crashes... Think about 6 -7 crashes??.... Well anyway the drift scene here is really picking up... This year the crowd turnout was like tri-fold as compared to last year... And the number of competitor were more as well...

those are all professional drifters...not amateurs....

"Singapore's tuning scene is very active, with many garages and outstanding modified machines as well as an abundance of exotic supercars including the R35."

yeah rite!...and then came here to Malaysia driving like mad on our highways...

Hey Gabriel, could you point me in the direction where the JDM car meets and cruises are? I just arrived in singapore and can't find a way into the car scene. Cheers man.