HKS Technical Factory has always liked to impress by creating some pretty rare cars in the past. Their most well known has to be the BNR32-based Zero-R built in the early nineties. Only 4 were ever made, HKS kept 3 due to homologation problems and one was bought by the Sultan of Brunei to add to his vast collection of exotics. But the car you see here, the HKS CT200MR is, believe it or not, even rarer than that. There is only one in the world!

The idea was to create a street-going edition of the shatteringly fast CT230R time attack Lancer which, with Nobuteru Taniguchi behind the wheel, has broken records at most tracks it has raced on. HKS first showed the car back at the 2007 Tokyo Auto Salon where it announced it would only be sold as a “complete car.” The price was about ¥2-million over the brand new Evolution 9 MR base car, something that, on top of the outrageously wide CT230R body, got you a slightly modified engine. There were lots of options on offer allowing potential customers to further customize their CT200MR with things like an HKS 2.3L stroker kit or upgraded brakes.

Looking at it from this angle you get the full impression of just how wide this thing is thanks to those angular fenders, seamlessly blended into the bodywork. Fit and finish is top of the line as is the quality of the paint; you wouldn’t expect anything less from a company like HKS.

Up front the CT230R bumper allows better air flow to both the intercooler and the side intakes, while the Varis carbon hood helps keep engine bay temperatures down thanks to the twin outlets. Curiously, the mesh grilles on both the bumper and hood were painted white, something I personally don’t like so much.

To help push the wheels out in line with the new wider fenders the 10Jx18″ Advan Racing RGIIs sport a +15 offset, while handling is courtesy of HKS Hipermax III Sport adjustable suspension. A full HKS braking system was on offer but the original demo car was left with the stock Brembo calipers front and rear. 265/35/ZR18 Yokohama Neova AD07 tires are used at all four corners.

Around the rear lights you get the idea of just how much wider this CT200MR is compared to a regular CT9A! The stock rear spoiler has been left untouched but a carbon Varis wing was also offered on the option list, along with a Varis rear carbon diffuser.

This complete CT200MR sports a lightly modified 4G63 developing 350 PS and 45 kgm of torque. To achieve this small power increase HKS Technical Factory replaced the stock airbox with an HKS foam filter to help the engine breathe easier while the HKS HiPower Spec-R titanium exhaust decreases back pressure. An HKS EVC boost controller increases boost marginally while the HKS F-Con iS ECU was specially mapped on the Dynapack at HKS Technical Factory.

Here you can see the HKS camber plates that are part of the suspension upgrades.

The rear end is as in your face as the front, it demands respect even from those following!

Aside from the HKS boost controller module and the HKS shift knob there is nothing much to show in the interior. The base car was a band new Evo 9 MR that had covered only a few hundred km when I shot it back in 2007 after the Tokyo Auto Salon.

Unfortunately the CT200R didn’t do too well. HKS Technical Factory never really got any serious orders and after a while the one-off car was sold off.

Strangely enough the car is still listed for sale in the HKS Technical Factory complete car list, so if you ask kindly enough they might make another one, but it won’t be cheap! This, probably the rarest CT9A in the world, was exported by Andy at Powervehicles.com, and is now owned by WKD Imports in Ireland.

Like the original HKS complete car, the Zero-R, it is a real pity that more CT200MRs were not made, as it’s by far one of the most eye-catching tuned cars to come out of Japan! 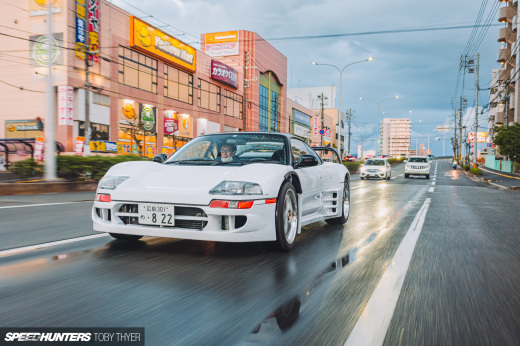 WOOOOOOW can you get any more clean with this car??? it is ridicilously awsome !!! oh im in love =D

Andy managed to get his hands on this? How on earth did he manage that?

I hope there weren't any special, "out of the order", favors given for the privilege.

I can't say I really like the wider look. It's just too much, you can get away with it on a time attack car, but not on a street machine. But that's just my opinion.

I guess I'm one of the lucky ones to have driven this car, as it now resides in Ireland. These are the first photos I've seen that do it justice, stunning work Dino.

Maybe it's just me, but this wide body looks pretty bad. The lines are just too angular and sharp.

i think that wide body kit looks awful. im also really surprised they spent all that time on the fenders and kept the stock wing.

insane once again another possible wall

Performance is beauty; besides who wouldn't want that rear end staring their opponents in the face, it would be discouraging for them lol.

It's a shame it was sent out of the country.

Hmmm....not a big fan of the sharp angles on the widebody kit....also the DS emblem is a little off center lol (2nd pic) But oooo its rare!!! lol...

Too wide and the sidesteps are hideous

@Nisslehoff - If you look properly at the second photo you will notice that on the left side (right side of the car) you can see the rear fender arch. And how about the on the right? Ooops you failed, looks like the emblem was centered after all. You think HKS themselves would F that up lol? Especially on a one-off car.

LOL @ all the haters.....ahhhh too wide ahhhh too many angles ahhhh

that is soooooo gangsta** i want one, sti killer haha

The sharp angles make it obvious what style they were going for...the Mitsu Starion/Chrysler Conquest. And, they did a BA job at it.

A HKS Zero-R BNR32 was actually sold to a Japanese customer in 2006, feature here: http://www.turbomagazine.com/features/0611turp_nissan_skyline_gtr_hks_zero_r/index.html

i am from Brunei and ive seen the zero-R raced back in year 99.

This may be way way crazy, but what is the chance some nobel speed hunter could score a tour of the Sultan of Brunei's garage('s)?

I see this car often as I know Wez in WKD Imports well...car is for sale as far as I know http://www.modifiedsonline.com/metal/car_viewdetails.php?car_id=92 beautiful car and Wez is a big EVO head...this is treated like a baby!

wow, what a beauty! definitely one of the best looking evo's around, that kit is just mad. maybe gloss black hoops and some more power? yes?