Those of you who read this site on a regular basis and have a decent attention span will be aware that the FIA GT Championship had its 2009 Media Days recently. Not only that but we got a brand new R35 Nissan GT-R for 2010's GT1 events. A new car must mean new rules have been written and agreed, well up to a point. The two days spent at the High Tech Test Track were in part to show what was offer in 2009 and to reveal the plans for 2010.

New rules and new cars mean it is goodbye to the current crop of vehicles, long overdue in my opinion as they have been around for over five seasons. Of course I contradict myself straight away………….the Vitaphone Maserati MC12 still looks the balons de chien and the V12 howls along nicely when prodded with a sharp stick.

So here is a look at what is planned for 2010 plus what will be seen on track in the coming year for GT1, GT2 and GT3. 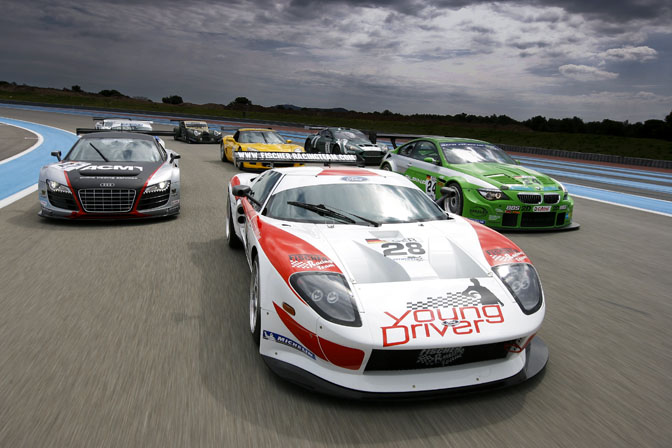 Like all good beauty pagents we will do this in reverse order.

The FIA GT3 Championship boasts an extremely healthy entry list, 42 cars from 12 different marques will have 12 races at 6 circuits.

The 2009 schedules is set at Silverstone, Adria, Oschersleben, Algarve, Paul Ricard and Dubai

Each race is one hour in duration, each car has two drivers who must each run a minimum 23 minutes in the car, meaning of course that pit stops for driver changes must happen between 23 minutes and 37 minutes in the race.

The drivers are graded according to experience and prior results so no entry will have two top line pros at the wheel. Teams must run 2 cars and enter for the full season. The tyres have been exclusively provided by Michelin up to this year but some teams will run Pirelli in 2009.

The performance of each car is assessed in pre season testing by 2 recognised "aces" (Christophe Bouchut and Jean Marc Gounon) and various adjustments to power, aerodynamics and weight are made to each car to make the playing field as level as possible.

The 2008 Champions were the Swiss Matech GT Racing team with the Ford GT that they developed in house with the approval of Ford.

The other team running a Ford GT is Fischer Racing.

New to the Championship is the BMW Alpina B6 GT3. Of course Alpina is a familiar name to anyone who knows their BMW racing history as Alpina-run cars were multiple European Touring Car Champions during the 70s. Alpina were granted full manufacturer status in 1983 by the German Ministry of Transport and in effect this eventually put a stop to their racing activities. The factory was too busy building and selling road cars to go to the tracks.

There are two teams entered in the GT3 Championship, this is one of the Sport Garage cars.

Another new car for 2009 is the Audi R8 LMS which is being run by Phoenix Racing.

Audi aims to make the GT3 version R8 a car that can run easily by any level of team, following the model that its new parent company, Porsche, have put into practice over many years. It is also planned to be a profit centre rather than a cost. Like all the entries in the FIA Championship the cars are also eligible for the National GT3 and endurance series such as the VLN.

There will also two more Audis on the grid courtesy of Team Rosberg.

Of course what sportscar competition could exist without Porsche and the 911?

And where you find Porsche you will also find Ferrari. Two teams running this year with the F430 Scuderia

Aston Martin are represented by four examples of the DBRS9.

Detroit legend, in the shape of the Chevrolet Corvette Z06 GT3.

Finally the Jaguar XKR-S run by Apex Motorsport. The car is heavily revised since last year and the team has brought the experienced John Chritie to oversee operations.

The team lost its founder, Richard Lloyd and lead driver, David Leslie, in a plane crash at the beginning of last year so 2009 will be a chance to get the results that the pair would surely have achieved.

The Championship kicks off in just under two weeks at Silverstone, SpeedHunters will be there to have a closer look at these GT3 cars.

I love the livery on the white and black Porsche. The red accents totally set it off.

Next season is promising to be even better than this one! I love it!

What are the engine displacement regulations in GT3? Is the 997 GT3 just a cup car? I would assume a GT3 RSR would be put in the GT2 class.

Side profile of the morgan is awesome, shame the front is just so f'ugly

I wish they covered these types of races on American television...sigh

cant wait!!! I agree with domo, do they cover these live online anywhere?

Pistonhead Joe: Unfortunately, I haven't found anything. I've searched long and hard too. Closest thing is livetimings... Believe me if I find something I will post it for the Speedhunters community though!

You can find resume of last race of 2008 at san luis here:

Unfortunately commentary is in spanish.

The Morgan Aero 8 GT3 looks unreal; like it just came from an alternate post-war era!

I believe you are correct. That appears to be "just" a 911 Cup Car. You can spot a 911 GT3 RSR (not to be confused with the 911 GT3 or 911 GT3RS, lol) which are used in the GT2 class, by their integrated front splitter, fender flares, and side exit radiator ducting for the outber radiators. On the cup cars the outer radiators duct through the wheel wells much like the road going GT3s. Also, the cup cars have the same basic airdam configuration as the road going GT3.

The newest iteration of the 911 GT3 RSRs have abandoned the shallow central radiator duct that exits at the top of the front bumper, in exchange for a full ducting setup that vents through the hood.

If you ever get a chance to watch the cup cars run, they look very amateurish compared to the RSRs which are much more planted.

This is different to the Standard 997 GT3 Cup car. You can tell the difference between the Cup and Cup'S' car by the fuel filler in the hood and the integrated Splitter (997 Cup is a seperate black piece), different fender flares and it side by side, taller rear wing

To confuse things even more....thanks Porsche...the Cup S is based on the 997 GT3 RS and has some RSR parts, cant remember, other than suspension.

wow that ASCARI or wathever was blastin coolness, more on that please ;p

Great write up. It's a shame we don't get any FIA GT coverage in the US.