There is so much stuff going on behind the scenes of a D1 event that it would be a real pity not to take a small look at the paddock area. So take a walk around with me as I show you some of the cooler stuff I saw at Ebisu this Sunday. The opening shot of the 1/10 scale HPI Racing RC drift car sitting right in front of its 1/1 scale big brother, is one I really enjoyed taking. The HPI staff saw me trying to get a good angle and helped me out by repositioning the car and dusting it off with a microfiber towel. You gotta love the attention to detail on this small RC car, everything is spot on starting with the graphics all the way down to the different color wheels front and rear!

A little further down the steeply inclined paddock of Ebisu was the Yokohama Advan booth where on top of publicizing their new line up of tires, including the new Neova AD08, some complimentary face painting was going on.

Merchandizing is big business at D1 events with pretty much every team and sponsor having something cool to sell. Here are some RPS13 and AE86 model cars that you can modify with the tune up parts that come in the box, like bigger wheels, stripped interiors with roll cages and God knows what else. A few years back I took a tough decision and banned myself from buying anything at D1, as well as pretty much any other track and race event. It's tough believe me, but it is something that had to be done as my office is already filled to the brim with a silly number of toys, gadgets, books, magazines, car parts, you name it I got it! It's a hard addiction to control!

There are also cool gadgets and toys for girls, like these model cars with anime characters decals applied to the bodies.

Here is something I came very close to getting! This is the same toy baseball bat used by certified bosozoku and Bee-R Crown driver, Tokita. I think this is one purchase I will have to allow myself to make next time!!

Walking back up to the top of the pit area I saw these two Ebisu officials mopping the rubber residue to the side of the track, by hand!! I kind of felt sorry for them and took a snap as I think they deserve some credit too. Kumakubo, if you are reading this, please buy these poor fellows a couple of leaf blowers!!

Posing for a quick snap here is Kodama-san, driver of the Garage M 180SX.  He managed to make it through to the Sunday qualify but not the Best 16.  The reason I'm showing you his picture is that his day job is rather interesting. He is in fact a Buddhist Monk and looks after his own little temple! When not meditating and doing rituals he can be found at local drift tracks around Sendai practicing his drifting techniques. How cool and equally bizarre is that!!

Here is a selection of manga, something that up until now, was not a common find at D1 events. But since Comic Bunch are sponsoring Saito for 2009, this is a display that is here to stay. I was even given a couple of free manga, seeing I looked so interested in snapping pictures of their lineup.  How nice of them!

Not surprisingly, girls are a big part of D1, and they are always so happy to put on some very JDM poses for the cameras.

Here is a shot that gives you an idea of their popularity.  I didn't even bother getting in line for this shot, as I really didn't stand a chance against that lot! 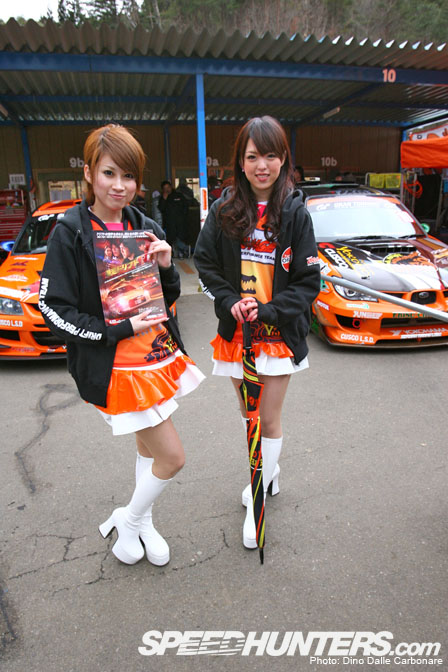 …while our contributer Suenaga was busy signing autographs…

The URAS stand was busy selling various kinds of merchandize with the Nomuken logo, without a doubt some of the most popular around. I must have seen 20 people with these baseball caps!

Not the best of seasons to sell t-shirts, which is probably why these Team Orange ones were being sold at half price!

Looking at this final shot makes me want to go out and play with my own RC drift car.  It's 2 am here in Tokyo so might leave it until tomorrow!  Hope you all enjoyed the Round 1 coverage.

Love the rc stuff. I dig shots like the 2 drift sweepers. More of the culture and behind the scenes stuff is always appreciated.

If you like the rcdrift cars so much, maybe you should do a coverage of a meeting from groovydrift.com/forum or http://driftercentral.com/forum. Or perhaps even rcdrift.nl/forum!

I plan to shoot at the Kazama Auto brand new RC track once I'm out there next! You guys wouldn't believe how tuned up the RC cars are there!

I thoroughly enjoyed reading this article and hope to see more like this one. Keep up the fantastic work!

the cool thing about that rc car is that the wheels are super fat from normal ones. so if you wanted you could run a stagger setup.

anyway best forums for rc drifting is http://www.rcdriftclub.com no bs, no bias

Kodama-san (who is a Buddhist monk) really impressed me..it's amazing..the enchantment of drifting..

I dont know what your talking about with the matching RC car in the first pic, the graphics are very diffrent, the front feders and windshield being the most obvious diffences. I wonder why they would do that? Maybe an earlier rendering of the paint scheme.

Good work on the marshall photo - without marshalls there would be no motorsport anywhere so it's always good to see them getting the recognition they deserve!

I didn't know Kodama was a monk! Hey, we have a drift samurai..and a drift monk, Next I'll be seeing a rabbi drifting!

just a quick question-does anybody know if you can buy anime decals for 1/24 kits anywhere as we are a bit behind the times here in the u.k.Many thanks.

I enjoyed your coverage of D1 very much Dino. Loved how you cover almost all aspects of D1 weekend that most people wouldn't usually see, like the RC cars, the merchandise and all the behind-the-scene stuff.

john u.k. - you could try a company such as SJS designs to make graphics for you

rc drifting is not getting the recognition it should.ive been doing it for about 4 years, and people come and go. in japan its huge. but once drifting becomes more mainstream, i think rcdrifting will be more appealing.

cheers captain i may explore that idea

Great post! It would be really great if someone would do a feature on Kodama! It shows a side of drift culture that could only be found in Japan. Is there any other info out there about him on the web?