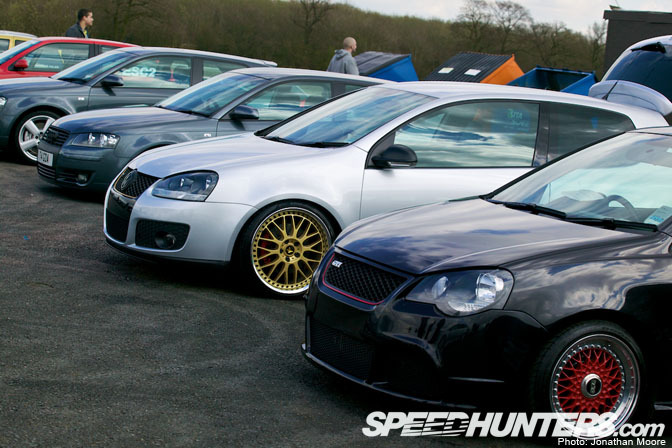 There was an impressive turn-out for the GTI Spring Festival, the first big VW UK event of 2009 – and also my first posting for Speedhunters. Even the British weather (which threw hail down the day before) smiled on us, with the rain holding off and the odd ray of sun burning through the clouds. Warmer than Japan, for sure…

Santa Pod was crammed with thousands of pristine examples of GTIs, and rocked to the sounds of booming bass and shredding tyres. 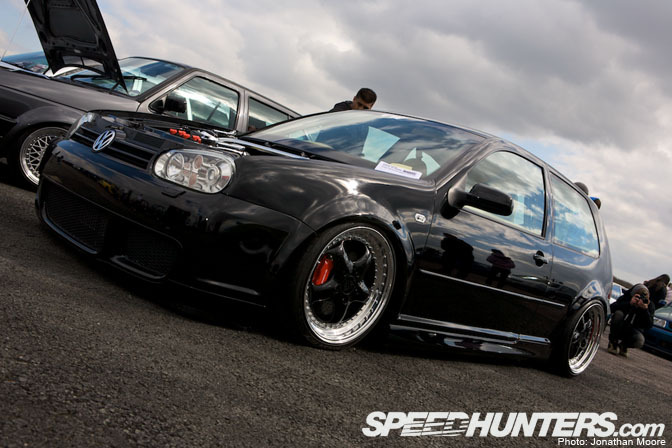 The main draws for the Spring Festival are the Show 'N' Shine competition and the "Run What You Brung" blasts down the drag strip. After all, what's the point of coming to Santa Pod, the home of British drag racing, if you can't shred some rubber? 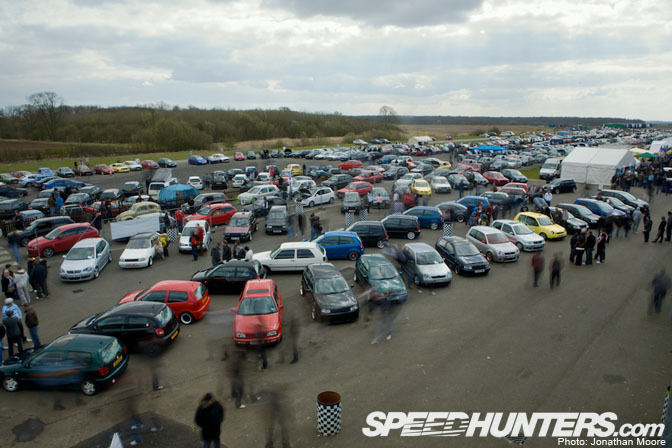 My arrival at the gate met with some sarcastic comments : an Italian car at a German-centric day was never going to be popular. Sorry boys, I'll think that through a bit next time. So, I was banished to the grass verges along with a Skoda. The humiliation! But fair point, of course… 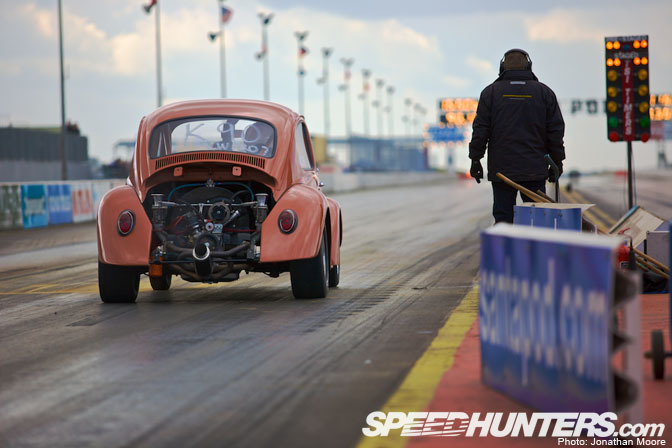 This is what it was all about: getting your wheels onto the slippery quarter mile strip. 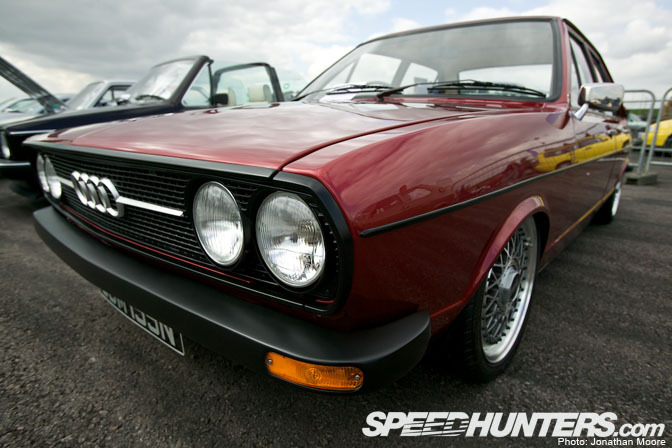 There was an eclectic mix of models present: although the majority of the show comprised Golf variants, there were plenty of other VWs, Lupos, Polos and Passats having their own little corners. Maybe surprisingly there were open arms for even those not displaying the VW roundel: a fair number of SEATs and Audis came to the party. 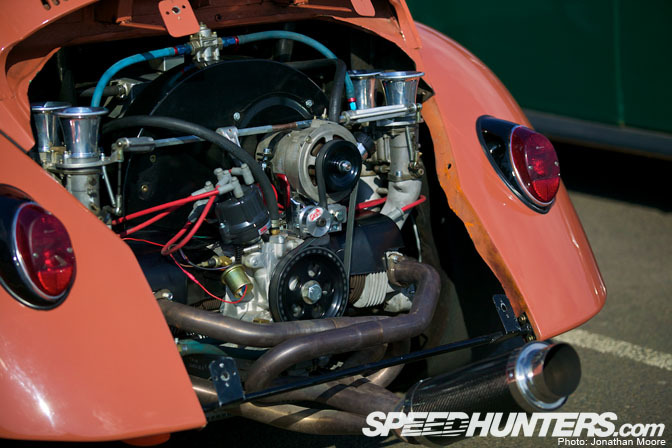 There might be a water-cooled theme, but Bugs and vans were also scattered around. It's all about family, after all. On top of checking out the show cars and club corrals, there were also a fair number of trade stalls on hand ready to sell everything you need to mod your car: rims, chrome exhausts, carbon panels and… pirate hats. Right. 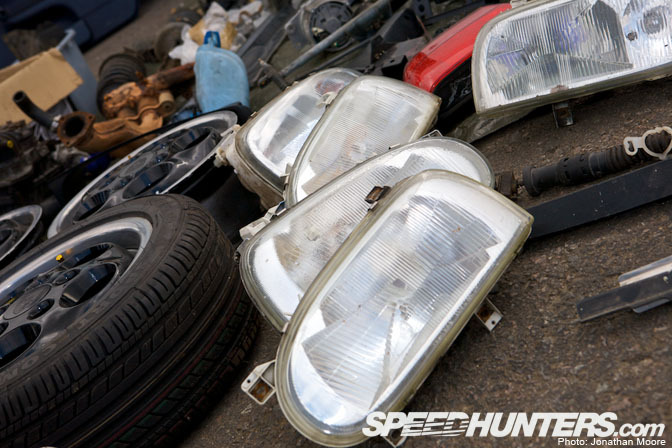 The AutoJumble area offered the usual broad range of used parts – I'm sure you could assemble a whole new car just from the bits and pieces being sold. That would be some FrankenWagen, for sure.. 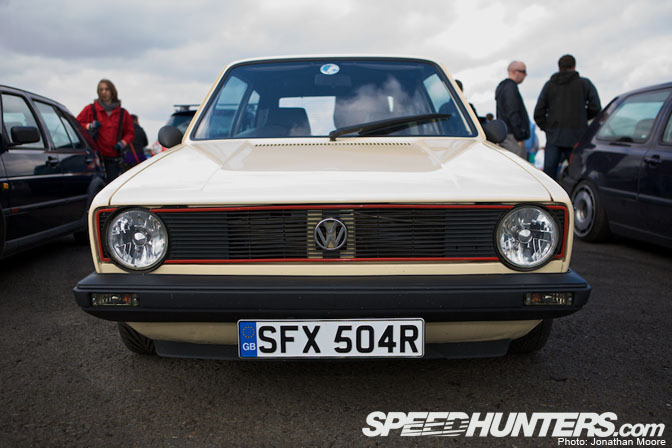 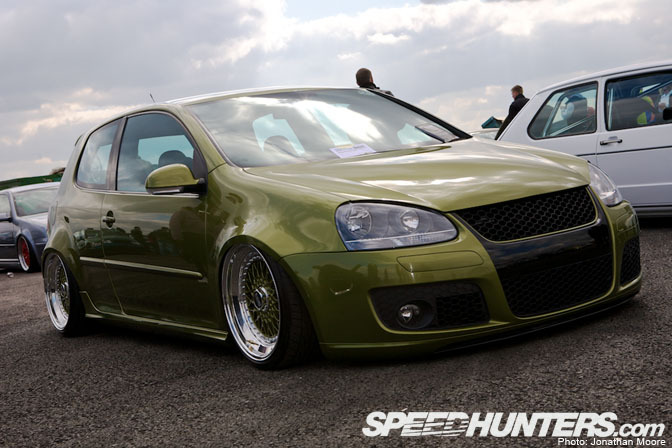 Although the number of heavily tuned cars on display was relatively small, wheels were the big focus: small and wide is de rigeur. 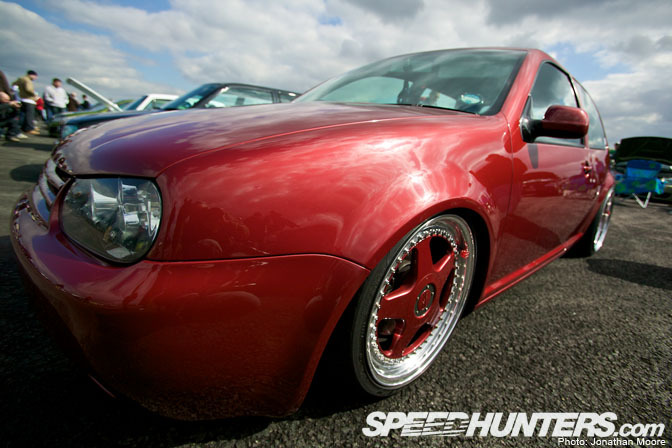 BBS are obviously still a popular choice, but I spotted some pretty mean Bentley- and Porsche-branded spinners. As Porsche effectively own VW now, aren't all VWs Porsches?!… 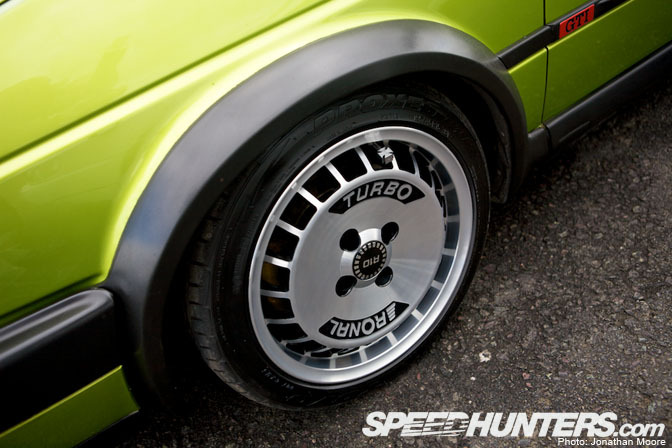 My favourites had to be the Ronals I spotted on a MK2 Golf, seen at the top: though I have to own up that it's because the 1980s DRM Lancia Beta Montecarlos used the same style… 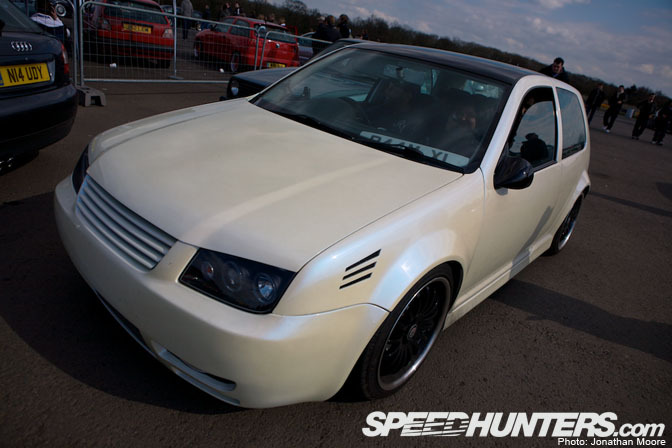 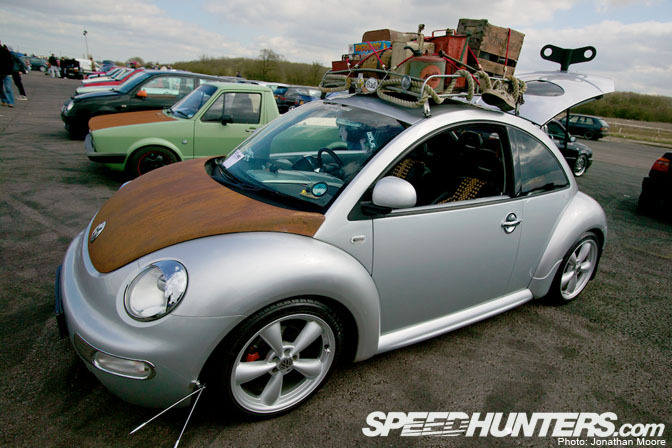 I particularly loved the rust-style New Beetle in the Show 'N' Shine. 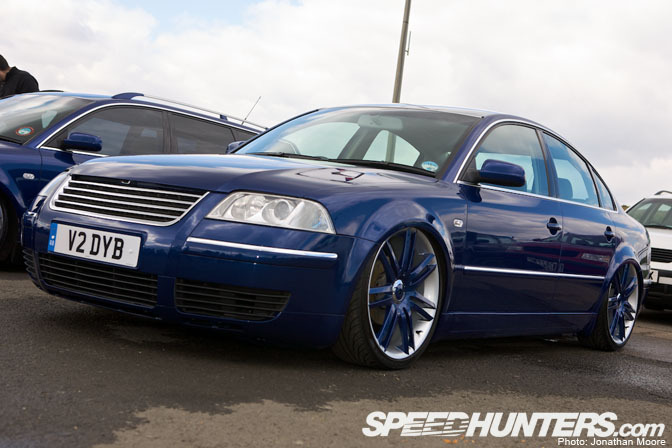 This gang of slammed Passats was pretty cool. 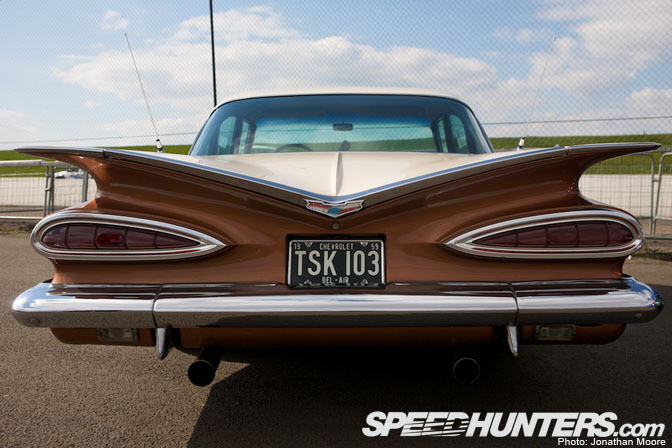 Out of place I know, but it can't be denied that every car should have a backside like a Chevy Bel Air. 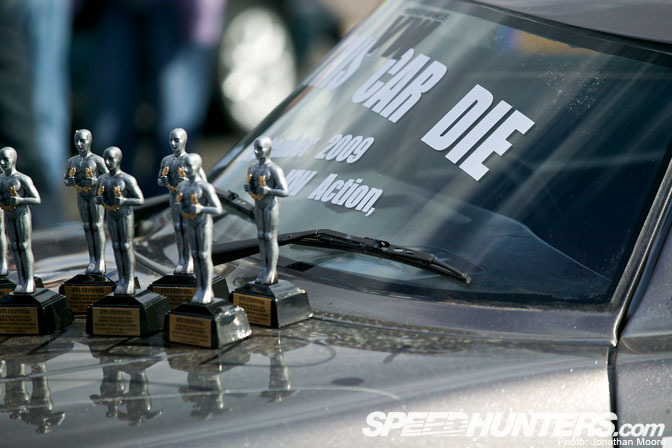 There were almost a hundred cars in the Show 'N' Shine area, again with a big variety. There were plenty of different categories, and with free entry most people came away with at least a mention, if not a trophy. 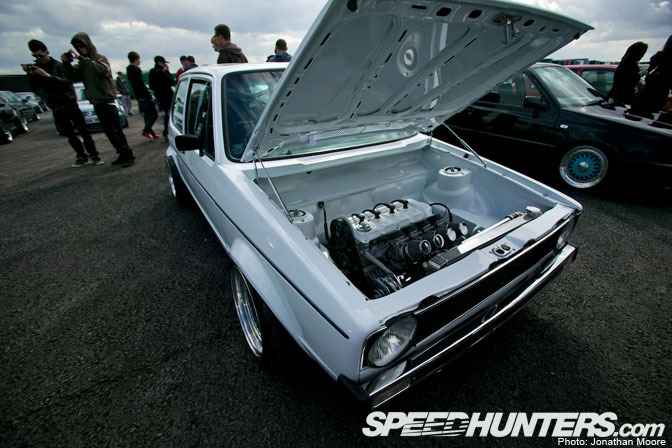 I found it difficult not to love the old MKIs on show: the purity of these older cars kept in top condition was great to see. 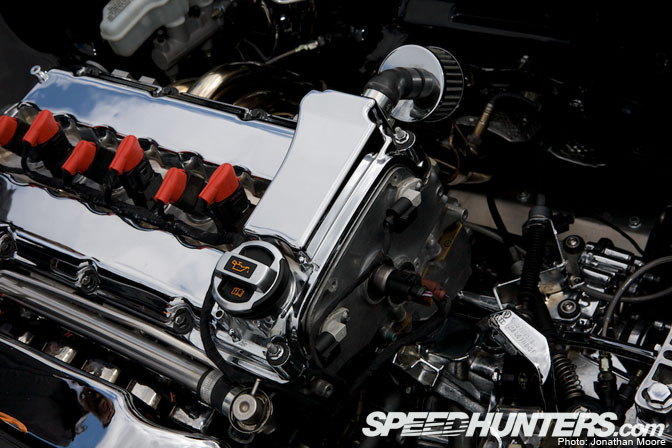 However, you can't help but salivate over the monster engines crammed into more recent 5 and 6s. Some of the paint jobs were stunning: engine bays gleamed and chrome shone in the all too brief sunny interludes. 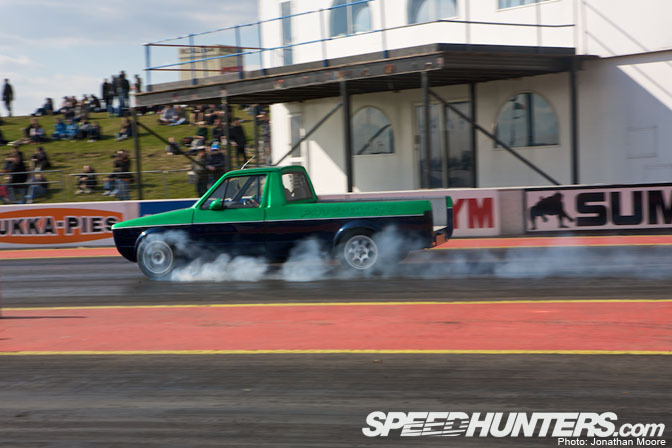 In contrast to the concours, being pretty didn't mean anything on the 1/4 mile drag strip. A couple of hundred people queued up throughout the day to unleash their hot hatches down the strip and the rule was simple: burn some rubber and the crowd will love you. 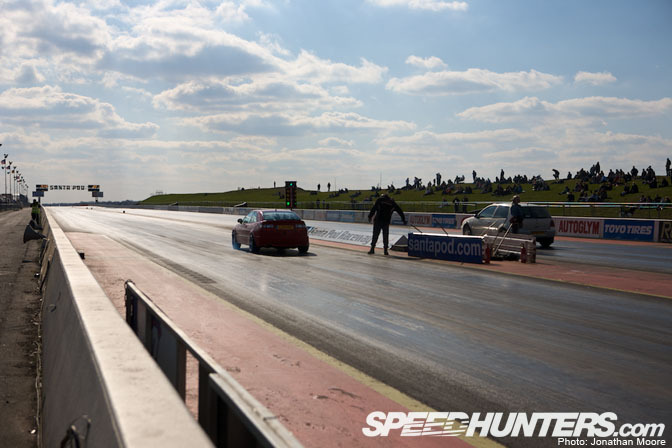 A constant stream of cars took the lights during the day, stopping only for a break over lunch to clean up oil. 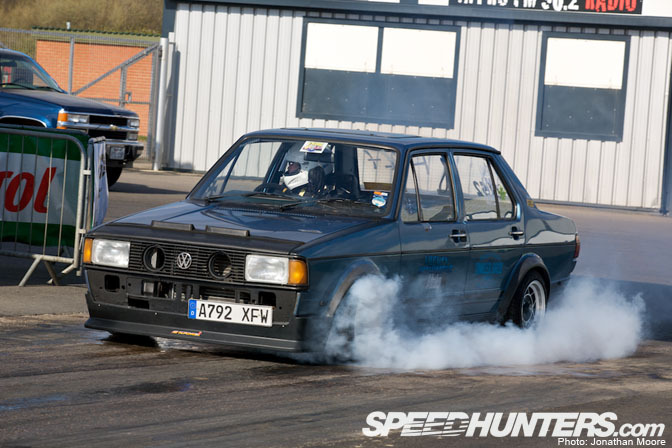 Polos and Jettas proved particularly adept at getting the smoke billowing in the burn-out area before taking the two-by-two start. 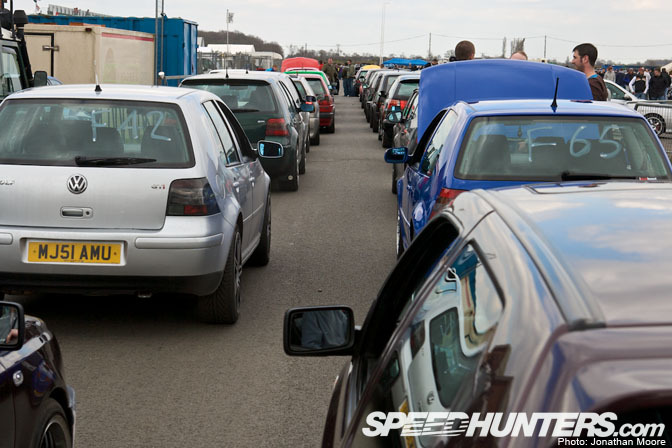 At £20 for unlimited runs the only thing stopping you was the queue, which stretched all the way round the paddock. 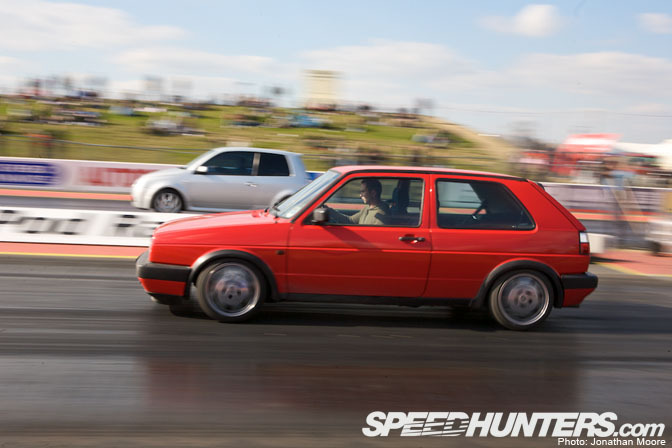 Everyone got the chance to practice their high-street traffic light take-offs. 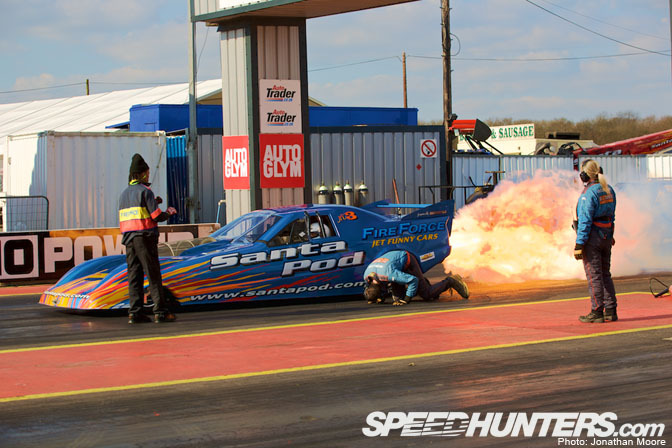 A couple of pro entries made attempts at serious times, but they were nothing compared to the two runs made by Santa Pod's resident jet funny car. That thing is an absolute monster. The crew chief conducted a virtual symphony of sonic booms from the driver hitting the throttle before giving him the okay to hit the gas. I've never seen anything so terrifying and impressive. The whole car seemed to sink into the ground before blasting down the course. Just over 6 seconds and 250mph over the line. Amazing. 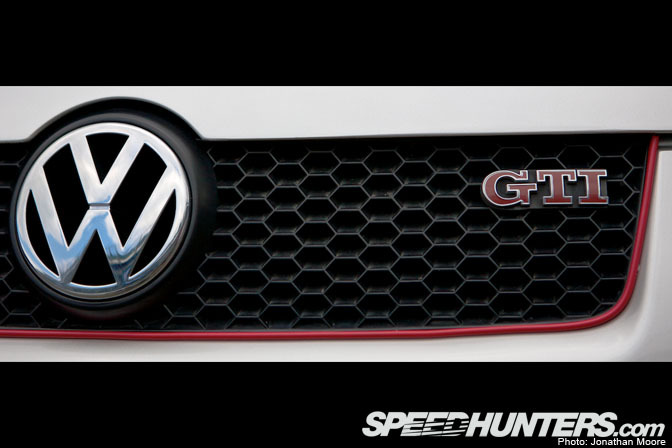 The first of four shows this year, the Spring Festival showed that VWs are as popular as ever.

Getting The Show On The Road: EuroTreffen ’21

i love the carbon muffler on that bug.. fart cans area bit dated but it actually looks pretty sweet.

Third shot from the bottom - Red Golf - Driver on track without seatbelt?????

please stop the rice! that bora front golf is so rice!!!!!!!

Hah! Those rims in the picture with the headlights are actually Porsche phone dial rims. Well, the cars they were most popular on (924 / 944) had mostly VW parts anyway...

Is it just me or do the big flared fenders on MkIV and MkV Golfs look really odd?

Opposite Chris, they're in the UK, so naturally it's the opposite side of the car

look a wee bit closer and you'll see he is indeed being safe.

I love that MK1 near the bottom...that is an insanely clean engine bay....all I see Is engine and white..beautiful. That drag beetle's pretty sick too

Love the cars though

R8 oil cap on the mki

I'm liking the eurostyle coverage! keep it up

that pearlescent golf with the bora front end, ive seen that around hatfield, i go to the same university as him

I love the wind-up thingie on that new beetle with the rusted bonnet!

Where can i see more pics of the Black MK IV??