Race car fans at the Autosport show not only got a chance to see some legendary racing machines on display, but the Live Action Arena gave them the opportunity to see, hear and even smell a cool selection of race and production cars do some demo runs. One hangar at the NEC was converted into a stadium track setup, complete with multiple jumbotrons, grandstands, light show and a massive sound system. Sequenced out as a 1 hour performance, the presentation was hosted by David Coulthard who is on his way to a new career as an F1 broadcaster with the BBC.

I was quite impressed with the whole production of the show… especially the choreography between the videos, music, lights and cars. It was a little bit like being at a high tech automotive opera.

The opening acts for the show were the two EDC drift cars… unfortunately they couldn't really generate much smoke on the smooth concrete surface… but it still was a great opportunity to show drifting to the general populace.

It was interesting to see just how much faster 4WD WRC Drifting is compared to normal drift cars…. This is the Matthew Wilson in the Stobart Ford Focus WRC….I'd love to see an AWD tandem drift competition with this type of car!

….the glowing exhaust is very cool.

I quite liked how in-car film footage and motion graphics would counterpoint and support the on track action.

Several different race cars were hung from the ceiling…. Personally if I owned this Ferrari I'm not sure I'd be lending it to the show organizers!

The Live Action Arena was also a chance for people to see some new cars do some demo runs. Nissan had their new 370Z doing laps….

Which would you take? The 8C or the 370Z? To my eye, the 8C is a more balanced and elegant design.

Lotus has really been on a roll since they launched the Elise…. The rise of track days around the world has also helped this company greatly. Here a 2-Eleven chases down the Alfa 8C.

Perhaps less impressive was the display of Legends… not sure why these cars would be part of the show…. Are they inspirational?

Or perhaps the idea is to show different sides of grass roots racing. These are Brisca F1 Stock Cars…. Britain's version of Sprint cars… Pretty odd looking… Herm…. Oh well, to each their own!

I wasn't too keen on the inclusion of the RX150 Rage Buggies in the Race of Champions… but seeing them in person has changed my mind. They look like a huge amount of fun and go like a bat out of hell.

I've never really seen WRC cars running in person previously…. I'm extremely impressed with what I saw. This is a Skoda WRC car. In spite of the slick concrete surface the speed these cars generated within the confines of the arena space, was a sight to behold.

The grand finale of the Autosport Live Action Arena show was a figure 8 race with a pretty large field of bangers…. hmmm…. I am trying to think of something else to write about this but my mind has gone blank… anyway…. let's move on…

In the Hanger next to the LIve Action Arena, Mercedes has their own little track set up, where you could get a drifting ride-a-long in one of their AMG super sedans…. I opted out though as last time I had a drift passenger ride I was sea-sick for several hours afterwards! The smell of burning rubber indoors would also sink in to your skull too…. needless to say I spent most of my time in the regular car show… hahaha… 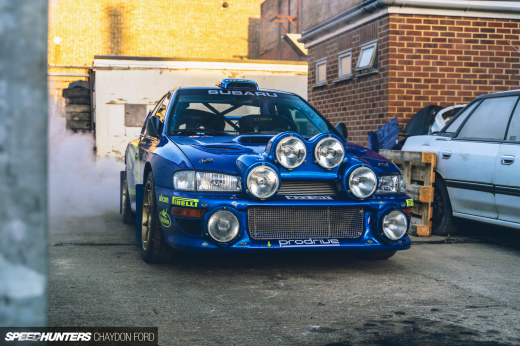 can we have a desktop of the stobart focus pleeeeeeeeeeeeeesase

The 8C definitely looks a lot nicer and sexier than the 370, but i'd like to have the car and still be able to drive it in ten years ;D

WRC's are pure evil on a car ! You should see them in a real RALLY !!!

Tha alfa actually didn't look that gud looking to me at first when i first saw the concept,but i have to say,i was dead wrong, it's gorgeous, look at it's lines from the side...

STJ - i think you are in the minority. what dont you like about the lights?

Rod - the legends cars weren't impressive in the show, but have a watch at this and then make up your mind - http://uk.youtube.com/watch?v=44CDEV4NmlE

Watching them at a circuit you appreciate them. Motorbike engines hooked up to a live axel. Tremendous.

Liking the pictures. I'm fishing through mine but it really was dark so they're not coming out too good.

Rod drive a legend and you will be inspired ;), At I guess I would say they would be there to show the best of grassroots as legends are fast, cheap (in a motoorsport sense) and the racing is very close and competitive I watch the Scottish legends regularly at Knockhill and they can be the best racing of the day.

I've never seen the Legends in action, but judging by motorsport forums, they are really good to watch, out on track

That is an intersting comparo indeed... Because The 370Z and the 8C are quite similar: looks wise, performance wise, and amenity wise. They only thing there not similar on is price as the 8c cost what.... 3 times as much. I would love to see these to head to head on a track. I think it would be intersting, however my money is on the 370z.

That said wich would I rather have?.... Well Id take the 8C for exclusivity. And If part of the "wich would I take" includes selling the car... id Take the 8C, enjoy it for a month or two, then sell it for a 370z and spend the rest moding my Z up.

i drove the 8C, 11-2, KTM-XBow and the tesla at teh show... It was an awesome experience believe me

We have a series of legends and there bodies are modelled on our V8 Supercar championship cars. These cars are frekin awsome and are some of the best racing I have ever seen.