On our trip to the UK earlier this year, I came face to face with a big pink monster. Get any ideas of fuzzy dinosaurs out of your head – I'm talking about a pink R33 Skyline drag monster from Sumo Power, in the UK. This car is very well known in the UK – it's gotten features inked from all the big magazines out there; this R33 has been stirring up quite a bit of attention from its performance numbers and overall impact!

The vehicle is a 1994 Nissan Skyline GTR, which was imported from Japan by Andy Barnes, owner of the car (and one of the organizers of the European Drift Championship). It's powered by Nissan's invincible RB26 straight six; actually, it's a special HKS 2.8 liter hi-deck race engine… maybe we should call it an RB28? Clearly Andy Barnes built this vehicle to beat anything it may come across. This thing has ridiculous amounts of power! (Does someone have compensation issues?) The current power level is 950bhp at 2.2 bar of boost!

However, I hear Andy just ordered a new HKS turbo that will make even more horsepower! Sheesh!

We brought this Skyline to Santa Pod, the famous UK
dragstrip, so Andy could strap himself into the Skyline and show us what his
R33 could do! All alone at Santa Pod, the R33 looked kind of lonely, in a
menacing and slightly evil way. As I walked across the dragstrip surface to get
this photo, the VHT on the ground grabbed onto my Nikes as I walked, tearing
them off my feet completely… several times!

Since we're looking right at them in the photo
above, let's have a look at the wheel and tire specs: Work Meister S1 15x8J
custom made wheels, Toyo DRR1 Drag Slick tires 26X10.5X15x4,Rays aluminum wheel
nuts. 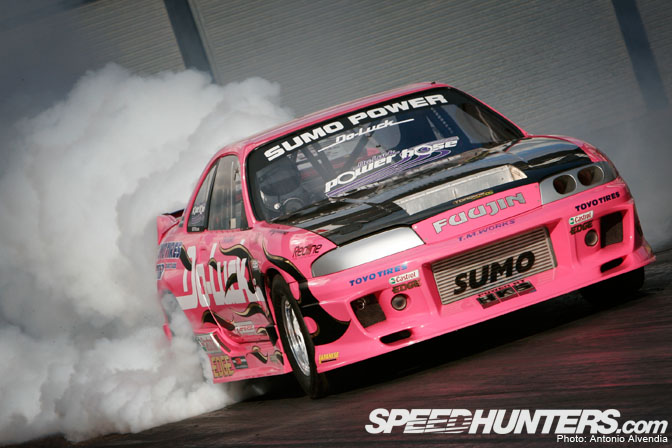 Now that's a burnout! I never imagined I'd see such displays of power coming from a pink car, but Andy and the Sumo Power crew definitely did a great job building the vehicle! Before we get into the engine specs, let's talk about some of the aero work first – one of the title sponsors of the car is obviously Do-Luck, the Japanese aero kit manufacturer.

Now let's have a look at the engine. No, that's not a big dump truck shovel in the front; it's an air duct that makes sure the hot air from the R33's radiator escapes rapidly out the drop vented hood. The signature purple anodized HKS air funnel on the turbo actually complements the pink paint pretty well. I was pretty impressed looking at the engine bay of this R33! Apparently our friends at Sumo Power know what they're talking about! This car is very well done!

Just take a look at how clean the camgears and plumbing fittings are – the guys at Sumo Power know how to take care of their car!

Inside, the cockpit is all business. No plastic interior trim, no leather seats, no touchscreen DVD players. This cockpit has been designed to be all function, but I happen to think it looks pretty cool too. Here's a rundown of the interior specs:

Look at the carbon fiber doors, and the pushed back seat, modified shifter and elongated steering column – the Sumo Power R33 has been modified to push the driver's weight back towards the rear axles of the vehicle for better weight transfer characteristics during its hard drag launches! This thing looks crazy!

Also spot the hydraulic lever, mounted to the left of the transmission tunnel – but it isn't an emergency brake for drifting! Andy uses this to control the ratio of power going to the front and rear wheels. The gauge on the left side is used to show how much pressure/power bias is being used… Andy says that this is the secret to drag racing an AWD GTR! I tried to ask him how much psi he builds up with the hydraulic lever before launch, and he laughed, and said something smart like "wouldn't you like to know, mate?" Haha, I just dropped the subject… honestly, it wouldn't even benefit me to know how much psi he launches at, because it's not like I have an 8 second drag GTR to use that knowledge with anyway!

Here's the rear of the Sumo Power GTR as it deep stages at Santa Pod, preparing to blast down the dragstrip for the Speedhunters cameras! Even standing still, it looks fast!

i really like that the cockpit, even though it's ULTRA spartan, still looks relatively clean with all the exposed CF.. usually in drag cars and the like you'll see oodles of diamond-plate steel which is very rough on the eyes

The first thing that popped into my mind was: I did see such a thing before... Then I remembered the legendary HKS R33 dragracer. It had more than 1000HP and did awesome runs!

Here's some more info about that car:

Could it be that Andy is aiming to beat that HKS R33 dragracer?

This car is a beast, great shots Antonio !

WOW. thats all i can say.

It's funny how things come around. Last November I spent a rainy couple of days down in Rye on the

It's funny how things come around. Last November I spent a rainy couple of days down in Rye on the

In Spring 2008, a month before Speedhunters launched, I took a trip with Antonio Alvendia to the UK.