As I write this, I am reliving my victory three weeks ago at Irwindale Speedway during the final round of Formula Drift, firstly I just want to say WOOOOOOHOOOYAAAA!!!! For me this victory was long awaited and well deserved if I don't say so myself. I've won two prestigious drifting events in the past: the 2005 D1GP USA vs. Japan and the 2007 D1GP World Championship. But I have yet to taste the glory and stand on the top of the podium in a Formula Drift event. The final round of FD proved to be the end of my bad luck season and a great way to put the season behind me and the rest of my team. Going into this event, I knew I needed to end my season with a bang, since it hasn't been the best season for me with nothing but ups and downs, so I had my game face on all weekend.

My qualifying position put me up against Bill Sherman who has come out this year out of nowhere just swinging. He has always been a pretty good driver, but lately, man he has just been murdering it. In Sonoma in fact he finished third, his first time back out in his 240SX. So here is this first guy I had to battle and to be honest battling a guy like him with nothing to lose and a ton of heart is a little more pressure than battling someone like Tanner or Sam. He was pretty close to me on the bank, but coming off I just kept it to the floor and pulled a nice gap on him.

Then when I was following him I was pretty much all over him and was given the victory. I was so much in the zone that I couldn't do any wrong, I got to that point we all try to be at every time. You know it when everything is slow motion.

My second run I was going against Ryuji Miki, a D1 series champion, who had just knocked out Rhys Millen. I had run Miki before at Sonoma, but he was running faster than I had ever seen him run this weekend at Irwindale. But just like in Sonoma, I was able win the round pretty easily.

Time was going by so fast and before I knew it I was battling Takatori in the final four round. I've run practice with him many times and I know that he is a great driver and very consistent, but not the fastest out there. I just knew that I had to play it safe and not get caught up when I was following him.

We had a really good, clean battle. It was a lot of fun; running against a driver that runs the traditional Japanese style of drifting without playing any games or any unorthodox braking or entries are some of the best battles I have experienced. Afterwards he told me that I was a very good driver and he looks forward to battling me again which was really cool and flattering. 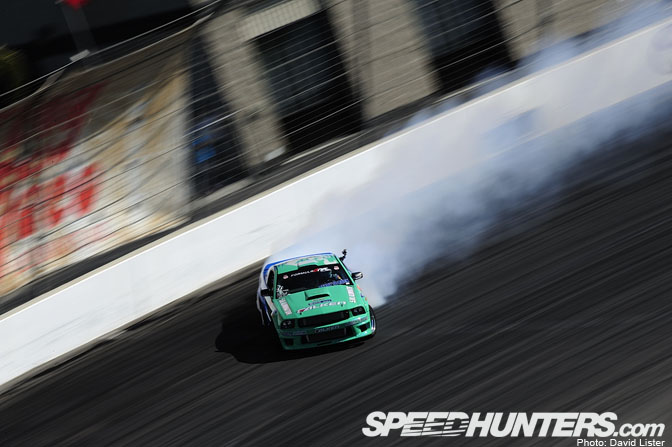 I was moving on to the finals and I hardly even remembered how I got there! I was battling 2007 and 2008 FD champion Tanner Foust who had just BARELY beaten me in Sonoma and who I had beaten the prior year in Sonoma and Seattle. Actually after Sonoma this year, I met Tanner's mom who came up to me and said "You know, when you guys were running against each other, I was just closing my eyes and was thinking in my head ‘Tanner you better win because JR always beats you'." It was even better that she said this to me when Tanner was right there too which I thought was pretty funny and him and I joke about to each other. So when I lined up against him in Irwindale I looked over at him and just kind of chuckled thinking about what his mom said which got me in a great mood to make my next run.

We went out there and he led first. I knew that the only way that I was going to beat Tanner was to beat him on the bank because both of us would most likely be perfect through the rest of the course. The bank was really where I knew I could get him. So when he was leading, I just tossed the car as high up on the bank as I possibly could and Tanner was pretty high as well, but compared to where I put the Mustang, it made him look like he was low. I mean I even touched the bank in the dead center top of it; I touched my bumper, stayed in drift, ripped my bumper off, and just battled him with everything that I had. You know he is very consistent, he's fast, and he's a solid competitor. Desperate times call for desperate measures and if I have to rip a bumper off to get a victory well so be it. So that first run I got a two point advantage.

That second run I just gave it all that I had with just a little less height on the bank this time because I didn't want to chance getting into the wall when I had the advantage. When the judges were deliberating, I kinda had a gut feeling that I had won. Tanner, myself and my bro Justin Pawlak (3rd place) paraded up to the crowd for the winners announcement. As soon as they announced Tanner as second place I just dropped to the ground and just started screaming immediately. It was just a huge, emotional moment for me.

After I got up off the ground I jumped up on the roof of the Mustang and started screaming and the crowd was going crazy. After I got down from my car all my friends from Falken Tire and my Drift Alliance bro's ran over and picked me up and were like throwing me around like I was a little three year old kid. Now I'm like 220 lbs, so this was a lot of people picking me up.

It was just an incredible feat and feeling for me. I think it says a lot about Team Falken and me as a driver; don't ever count us out!! We come out to the last event of the season and just knock it out of the park. Especially by beating Tanner, the 2007 and 2008 champion of the series.

It goes to show that when we're on as a team and that Falken Tire Mustang is on and rockin', we can pretty much defeat anyone as we proved this weekend and have proved in the past.

I really want to take a quick second to thank everyone who has been there to support me. All my fans, all my family, all my sponsors, everyone who reads this blog, anyone who sends me encouraging emails, My Space comments, and supports and encourages me on event day. I want to thank you guys for supporting me this whole season no matter how bad or good I placed. It really means a lot to me especially when your under the gun in professional motorsports it's easy to get down on yourself and it really takes a lot of energy to stay positive. Fortunately I had a lot of positive energy this weekend and there is no question a majority of it came from you all.

I really look forward to next season. But I am definitely thrilled of how I finished this season and I am super excited for the Red Bull World Championship. Hopefully I'll see y'all out there. Thanks a lot to Mike Groh and Dave Lister for these incredible pictures. Make sure you stay tuned for my next blog where I do some Speedhunting of a new kind… into the world of dirt track and road racing!

It's about time considering all the HYPE that surrounds you.

i dont know about anybody else but i dont want to see any white girls for my race queen at a drift race or maybe i just love asians to much. i would love to see a post on ken guchi

Thanks Alex! Two Thumbs up Brosef!!!

Alex, we can always count on you for some good old fashioned hating... At least you're consistent, bro.

Great work JR, You kill it at Irwindale always!! Alex, have you seen JR in action there? Cause if you have you need to pull your head out of your arse!!

Will see you at the RB World Champs JR, fresh crew from NZ coming up this time!!

I remember the last match between JR and Foust, that was a real good battle man. congtrats with the win. The falken team looks like it will be a juggernaut next season.

Where are the pics of Pawlaks FC??????? Kinda lame not seein the Mazda up in here.