It's no secret that we talk about wheels a lot here on Speedhunters. I mean they are probably the most important component in how a car looks, right? Some people say that wheels to a car are like shoes to a person, but in my opinion the importance of having decent wheels on a car is more important than the shoes someone is wearing. I came up with the idea of doing individual posts about our favorite wheels from all over the world, but before we do that, I want to just give a quick rundown of some of the most popular Japanese wheels from the early days up until now. What better to start with than the iconic vintage wheels that have remained popular from their introduction all the way to the present?

While a lot of people might have the impression that used JDM wheels are much cheaper in Japan than elsewhere, I don't think that is necessarily true when it comes to the original vintage wheels. Unlike some of later wheels which have not aged well, the old school models continue to be popular and they will only grow more valuable as the years go on. The classic car scene in Japan is booming and strong demand for these wheels has kept prices relatively high. There are still a lot of nice wheels to be found, but don't expect to walk into your nearest Up Garage and come across a set of flawless RS Watanabes on sale for dirt cheap.

Another good thing about these old wheels is that the bolt patterns of nearly all vintage Japanese cars is 4×114.3 which makes searching for wheels quite easy. Just pick the style and sizes, and you're good to go.

Keep in mind that this isn't supposed to a be a definitive wheel guide, just an intro to some of the popular models for those who might not be familiar.

How could I not start things off with the RS Watanabe? There is nothing that even comes close to these in popularity for vintage Japanese cars. There are many different variations on the original eight-spoke design, but I will save those details for a later post. It's not just the classic car guys that love Watanabes, I have seen them on nearly every type of Japanese car you can think of, and plenty of foreign cars as well. Whether you have an S30Z, an AE86, or a Mazda Roadster, there is nothing that these wheels don't look good on. I even see minivans and kei cars with RS Watanabes when I go to the grocery store. Heck I recently bought a set of Watanabes for a car that I don't even own yet! That's the appeal that they have.

The Hayashi Street might be the second most popular vintage Japanese wheel. There are a few different types of Hayashi Street wheels, but the most popular one is the CR type like the ones seen above. The CR's come in the most aggressive sizes like the radical 15"x10J -25. Even with the recent surge in popularity of classic Japanese cars worldwide, it is still pretty rare to see Hayashi Streets on cars outside of Japan. Fortunately, if you have the means you can still order brand new sets today direct from Hayashi Racing in Japan.

The Hayashi Racing Sakura wheel is one of the hardest to find and most desirable on the secondhand market. As the name suggests, the design of this wheel was inspired by the famous Japanese cherry blossom leaves. Although used sets are extremely hard to come by, Hayashi Racing has started reproduction of brand new Sakura wheels. I have been to a lot of classic car events in Japan, but the red Kenmeri Skyline seen above is one of just a few cars I have seen sporting a set of Sakuras. 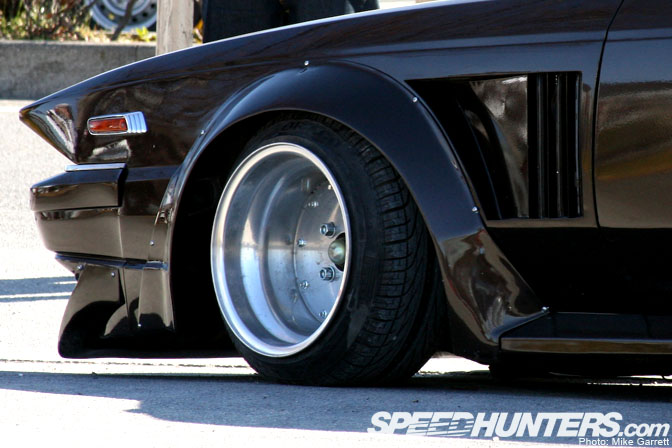 The Speed Star Racing name is legendary when it comes to vintage Japanese wheels and the Mk.1 model was one of the most popular.  A lot of kyusha-kai guys in Japan will run Mk.1's in ridiculous widths on their cars. The design on the Mk.1 is quite notable for its lack of any vents or spokes on the face of the wheel. They remind me a lot of the original Centerline wheels in the United States. You can usually find a pretty good deal on a set of Mk.1's on the used parts market.

The Mk.III is my personal favorite of the SSR "Mk. series". Just look at how great that looks! Of course these wheels look fantastic on classic cars, but they also look great on newer compact cars and I have seen quite a few done-up kei cars with Mk. III's. This is truly a timeless wheel design, and many other people must share the same view judging by the prices these things sell for on the used wheel market.

Mesh style wheels did not become popular until a little after some of the other wheels in this post, but when it comes to Japanese brand mesh designs, the SSR Formula Mesh and Reverse Mesh is king. These don't pop up quite as much on the '70s era cars, but they are very popular among AE86 and S13 Silvia enthusiasts. You will even see them on a fair amount of front wheel drive Hondas.

Not only is the name "Longchamp" very cool in itself, but the wheels also happen to look cool with their simple six-spoke design and multi-piece construction. The Soarer in the photo above is equipped with a very aggressive set of them. Longchamp wheels are quite common both in Japan and elsewhere and sometimes I am surprised how affordable these wheels can be when you consider how cool they look.

The various models of the Work Equip line are still seen often on cars all over the world. I don't recall seeing a ton of "classic" cars with Equips in comparison to the other wheels seen above, but the Equips are still very popular even among people with later model cars. All of the Tec-Arts AE86 demo cars are "equipped" with aggressive sets of Work Equip 03's and they look amazing with their gleaming polished wheel lips.

Well, that finishes up the first part of my look at iconic Japanese wheels. Next time we will get a little more contemporary.

...RS Watanabe, yep ive got a pair, for the rear of my AW11, 7x16",high-ish ofset,and was going to fit 15 on front, when i could find, but got some te37s now, but cant bare to part with the classic RS Watanabes, least at mo, hehe.

I admit to not having an extensive knowledge of wheels, but quite a few of these appear to be 'knock-off's and/or heavily influenced from 60's and 70's Minilites, Campagnoli, Compmotive wheels and even early BBS wheels.

Cool article, loving all the oldskool rims design. Thanks to you I finally managed to gain some new info on some rims that I've seen before.

Enkei Apache's. the one that looks like a cross with a logo of an apache chief at the middle. prolly one of the Best out there. only thing is i dont know why they are not that popular at japan.

seems like the right place to ask this question, what do letters mean in wheel sizes? ex. 15"x10J?? I think i;ve also seem H in the diameter, any light shed on this subject would be greatly appreciated

You will often find a three figure number on tyres as well. This will tell you the month and year the tyre was made.

This is for road tyres. To confuse people further, some race tyres have a different format. I'm sure this is the case on the Michelin shod Aston Martin DBR9

While all of these rims are awesomely awesome, i agree with Mr. Blackmore, many of these styles, especially the RS Watanabe, are styles which have been around on touring cars for many decades.

My favourite of this bunch is the SSR Formula Mesh

Let me say something.

It is not SAKURA but YAYOI.

Now HAYASHI RACING has reproduced this extremely rare wheel that TECHNO RACING used to make, but HAYASHI has not changed the name of this reproduct wheel; still its name is YAYOI, not SAKURA.

Thanks for the correction. Interesting history behind these wheels!

thats a good overview of a few of the more well known oldskool wheels. maybe antonio should do the second part of this since hes like our wheel/stance expert on the AE86

Andy Blackmore: RS Watanabe is not a new company. they started in the 60's

the cherryblossoms look nice. i heard that collectors sometimes dont even mount them. they buy them and then store them like priceless paintings...

This reminds me of the cool forum thread on JNC: http://www.japanesenostalgiccar.com/forum/viewtopic.php?t=605 . It's great to see the different styles, which are quite unknown in e.g. Europe.

I'm starting to feel like I'm back at school again. You guys should make a test at the end of the year and see who graduates =P

I know all rims so far and would love to own a set of all of them!

For the second part... I would expect it to contain at least the famous Doridoris... And no cool JDM wheel article is complete without Celica/Carina A60 rims (aka Celica Supra MK2 rims) either...

If you need a nice example:

ProTree, I appreciate that, but its still a knock off of a Minilite from the UK

Yes, RS Wats are like minilites with fat stepped lips and low offsets.

I actually think the lip is very different and prefer the RS stepped lip much more.

Andy Blackmore: if we were to follow your theory then that means compomotive is essentially a knockoff of minilite. a knockoff wheel is a wheel with a design that is EXACTLY the same as its copy. the RS spokes look similar to minilites but the overall wheel is different like what smoktout mentioned. if we were to consider similar styles as knockoffs then every wheel manufacturer would be a knockoff of bbs since they made the mesh design.

rota on the other hand makes EXACT copies of wheels from other wheel manufacturers (rays, desmond, crimson, weds, etc..). a good portion (and i mean majority) of their business come from people who want jdm wheels but could not afford it

I can't find Longchamps in SSR Homepage, so only available in used market? They sure look nice, but the Watanabe for me Sir.

Does anyone know where I could find really wide/deep dish mesh rims? Or any deep dish at all?

Does anyone know where in the E.E.U.U. can I find a decent set of Japanese wheels, I want a set for my kp61

The original Hayashi Sakura. Forged when Izanami and Izanagi formed the islands of Japan. A true Japanese unicorn.

Another beautiful japanese wheels are the Toms Igetta, specially the 13x7,5

I can relate to this , Also have a set of Apache 2 and Sprint Hart CP , Fortran Racing Mesh

Hi Mario, u may find it here http://www.JapaneseWheel.com