SHARE Temple Of Speed>> Spa: The Old Circuit And The Porsche 917

Regular readers will know that September is Porsche month here on SpeedHunters and Rod, Antonio and I trekked around Europe back in July eventually reaching Spa Francorchamps for the annual 24 Hours race. 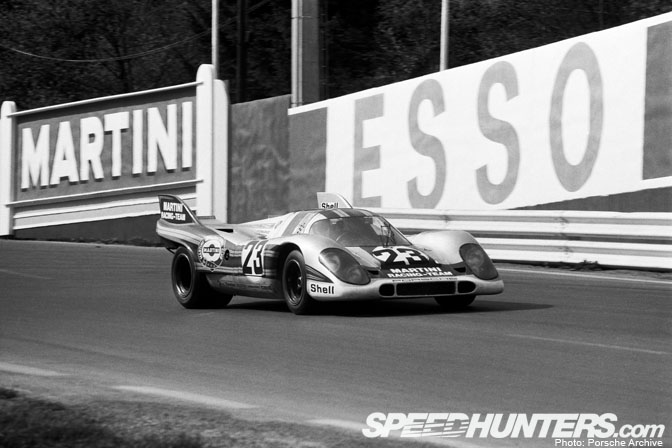 So what better way to round off a month considering the best of Porsche with a homage to one of the great temples of speed, the old Spa Francorchamps circuit. 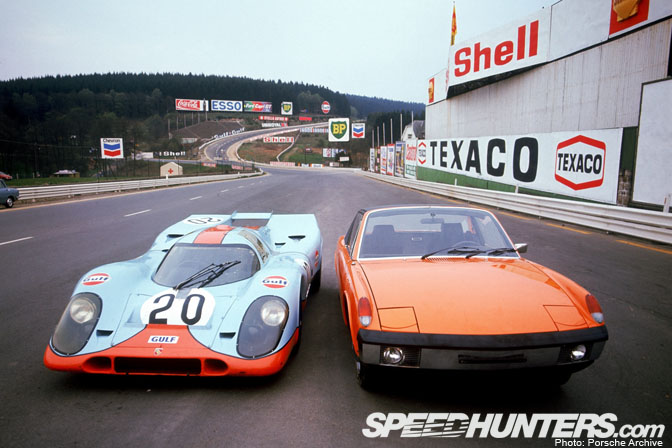 Many of you will know already of Spa, where the Grand prix circus plies its trade annually, treating the difficult, very fast track with a large measure of respect. Indeed before the Stewards made their controversial intervention after the race the last laps of the 2008 edition featured a classic all out battle between Lewis Hamilton and Kimi Raikkonen. The average speed of the eventual winner, Felipe Massa, was 138.38mph (222.715kph), which sounds quick but that average would have got you nowhere on the old layout.

First dreamt up in 1924 by Jules de Their and Henri Langlois Van Ophem, the original 9 miles(15km) course used the public roads between the Ardennes towns of Francorchamps, Malmedy and Stavelot. Of course even then the track was famous for high speeds. 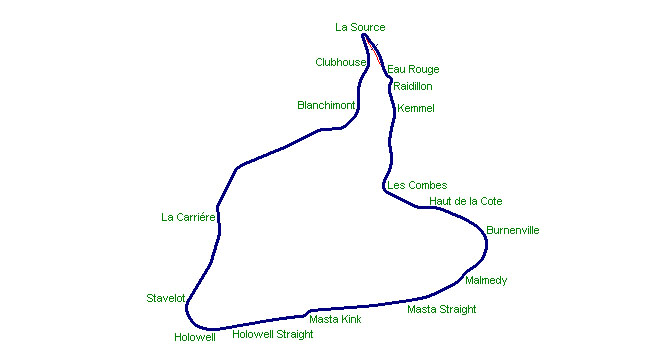 The start was downhill towards the Eau Rouge/Radillion complex of corners, Antonio has already given that its own Temple feature. Assuming that was negotiated successfully it up the Kemmel Straight and onto Les Combes. Here the current f1 track heads off right but no so the original layout. Without lifting off the accelerator it was over the hill and flat out down to Burnenville and Malmedy. 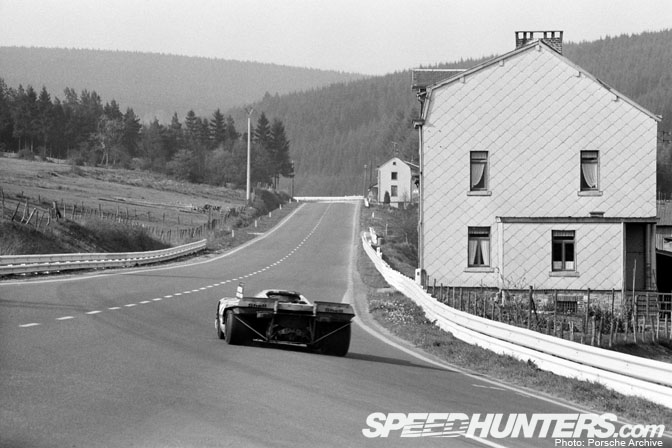 Then to possibly the most difficult part, along the Masta Straight threading through the Masta Kink onto the Holowell Straight towards Stavelot. A banked right hand turn was folloed by another blast through the forest to Blanchimont where old and new tracks unite again. The Masta Kink, a high speed left-right chicane, was the key to a fast lap as a high exit speed here was vital to the next series of straights. 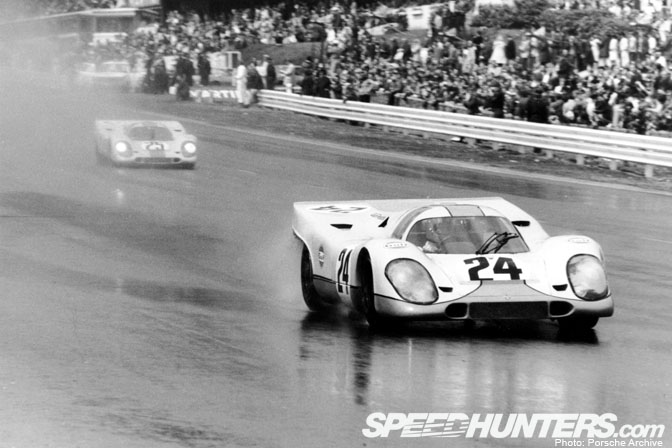 Cast the story back to 1970 and the Spa 1000 Kilometres. The race was dominated by two John Wyer Automotive, Gulf sponsored, Porsche 917s with a factory Ferrari 512S for Jacky Ickx and John Surtees being the only real opposition. Pedro Rodriguez’ 917 was on pole by 4 seconds from Jo Siffert in the second Gulf car with the Ferrari being a further half a second adrift.

The Mexican set his time while bedding in brake pads and being apparently “cautious” as a result of a tyre deflation problem that the JWA 917s had suffered in practice. To those familiar with the Mexican it came as no surprise that he set a time 3 seconds quicker than pole in the course of the race. The 917 were racing 4.9 litre engines for first time and had the benefit of new aerodynamic tweaks to the engine bay area together with a new spoiler arrangement both developed by the team and tested at MIRA, giving significant downforce gains with minimal drag penalty. 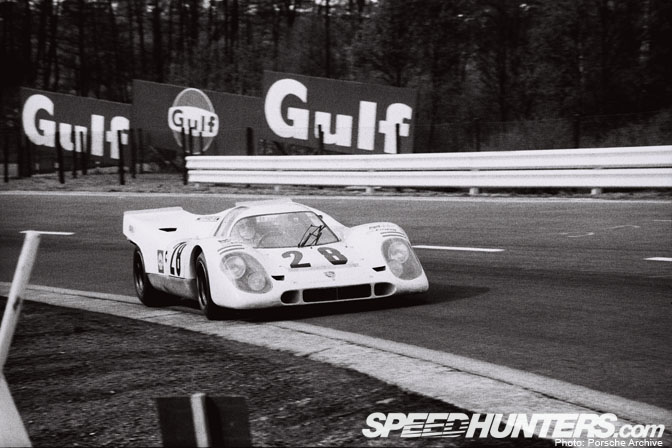 During the race itself Rodriguez, Siffert and Ickx put on performances that were in a different league to the others in the pack, setting lap record after lap record while swapping the lead between them. The result was decided when the Rodriguez’ 917 suffered transmission failure with Leo Kinnunen at the wheel and by the heroic efforts of Siffert’s partner, Brian Redman, who blew away Surtees in the 512. 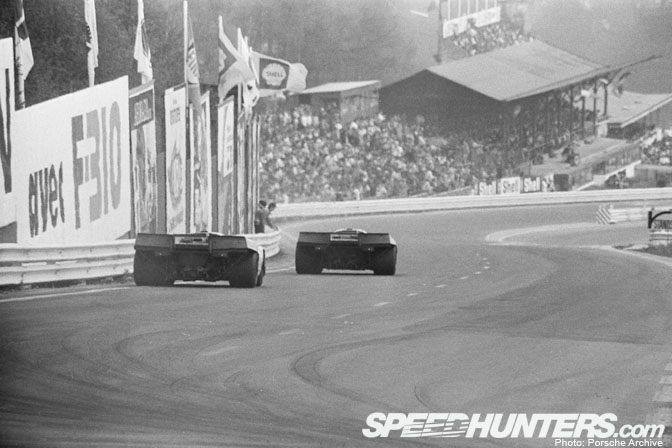 1971 saw a repeat victory for John Wyer’s Porsche 917s, this time it was Pedro on the top step with Jackie Oliver sharing driving duties; Siffert was once again shaded by his team mate, a young Derek Bell, pole sitter at 3.16.00. Records were established with the race being won at an average speed of 154.77 mph which still stands as the highest ever race speed achieved in any form of circuit racing and the fastest lap time was lowered to 3.13.60 by Pedro.

According to John Horseman’s excellent book “Racing in the Rain” the 917s were in top gear, 4th, for up to 87% of each lap with a maximum speed of 218mph being achieved approaching the Masta Kink. Finally, the 1000 Kilometres were completed in a minute over the 4-Hour mark, incredible.

Three years later in his Matra MS670 Henri Pescarolo managed to clip 2/10ths of Rodriguez’ best time to leave the average lap speed at 163.086mph, that record will stand for all time.

So much for the speed but at a time when drivers lost their lives on an almost weekly basis there was a move to bring some sanity and safety into the sport. The crusade was led by the great Jackie Stewart, three time F1 World Champion. He had personal experience of how dangerous Spa could be. During the 1966 Belgian Grand prix his BRM hit a wall of water at the Masta Kink, flew off the circuit and  ended up side down in the cellar of the farmhouse on the outside of the corner, with fuel gushing out of the tank all over him. Formula One left Spa after 1970 and a few years later so did Endurance racing. As one driver put it, back then sex was safe and driving was dangerous.

A new circuit, much shorter was introduced in 1979 but unlike most old tracks that had been “improved”, particularly by the F1 crowd, the new layout retained the spirit of the old one and has remained a favourite with both drivers and fans. 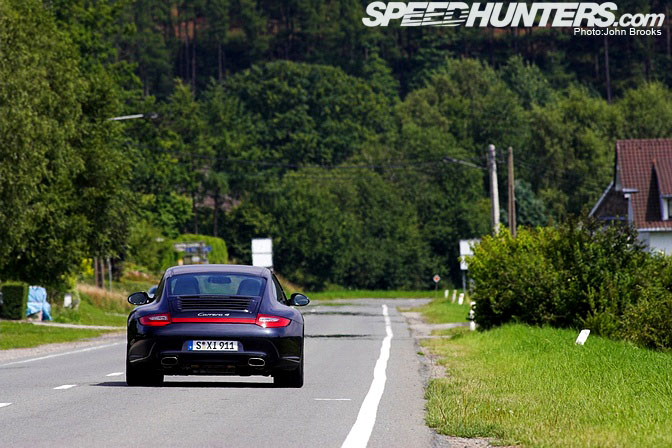 Until 2000 the revised track was still part of the public highway but has now been closed off to the public. However it is still possible to drive most of the section from Les Combes to Stavelot and it requires little imagination to see how brave you had to be to race at this Temple of Speed. Rod and I were in a Porsche but drove at the speed limits not at the limits of speed. Which is how it should be on the road.

If you get the chance to visit Spa, make some time and go to the old track and raise a Salut to those who raced there, they earned the respect of us all.

wonderfully vibrant article! i love all the archive photos, especially the one of the two 917's driving down the straight (shot from behind), such wide and low cars!

Such an awesome track. Those 917s are just plain awesome.

Fine article John. Ive read quite a few terrifying sounding accounts of 917 driving (not least from Redman) & the with circuits like the old Spa, the drivers of yore were absolute gods. I met a Mexican fellow at Nihongo class yesterday and he didnt know of the Rodriguez brothers. He looked quite frightened when I began frothing with enthusiam about Pedro, Im a bit of a fan, alhough this era was a bit before my time. It's just so good that some races remain on film.

Quite right John, it really was not only exciting, but frightening as well.....especially before the race!

I just joined and wanted to know about Spa more, and the drivers,

Siffet/Pedro/Redamn/Attwood /Elford/ Barth/Piper etc and all of them what a frightning experience it must have been!

Nice answer Brian how clogged was the toilets mate and sweaty palms.

I once spoke to Sir Jack brabham and Denny Hulme about the place and they too {even Black Jack} said much the same as you !

Kicking off the second half of 2010 with a trip to Spa was never going to be a particular chore. This

Kicking off the second half of 2010 with a trip to Spa was never going to be a particular chore. This

Ah, Spa. One of the all-time great racing circuits, no matter what form you refer to. And that's the only way it should be.