The JDM Allstars is an invitational only event where the best drifters from Europe battle it out for top honors. Round two was held on a parking lot in front of Wembley stadium in London. To me it has the same feeling as the D1GP Odaiba event in Tokyo where the background consists of the landmark Fuji TV building. The track was laid out on the parking lot and build with 275 tonnes of concrete barriers. During the event some drivers found out the hard way and crashed their cars into the concrete walls

Phil Morrison is getting sideways, it's almost like he does this for breakfast, it looks so easy! The car is looking good with the full Vertex Ridge bodykit and the exhaust peeking out through the frontbumper. The amount of smoke this car generates is amazing. Phil made the top 16 but he got defeated by Olaf Commijs from the Netherlands. So big thumbs up for the Dutch 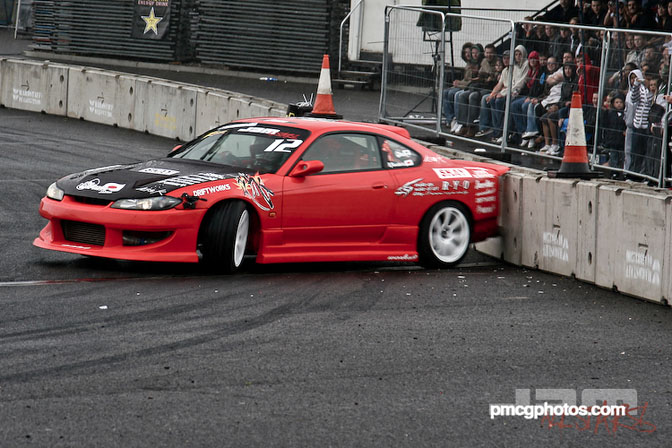 In the picture above you see Kawabata-san from Driving sports who came all the way from Japan to compete. His S15  is just touching the barrier, damaging his exhaust. The car features a built SR20 with Tomei pistons and conrods. It's really cool to see that the Japanese drifters show a interest in the European drift scene and are willing to travel all the way here to compete.

Kawabata qualified in 11th place and that earned him a place in the top 16. There he went up against Nigel Colfer, I heard from people that this was the closest battle they had ever seen. After two ‘one more times' the victory was awarded to Nigel, driving a S13,5 from team Xtreme Autos. I really think that the European drifters are getting better and am really looking forward to a world drifting championship.

Here you can see a small clip from Kawabata kissing the wall http://www.youtube.com/watch?v=N4mNF1Tr7Ew

Mark Luney in the SVA Imports built 350Z. When the car first debuted in 2007 it featured a carbon creations bodykit, I really liked the look of the car then. Since then, they have changed the bodykit to the one you see in the picture. The car has 3.8 liter turbocharged engine and a custom made Tein suspension system that is controlled from inside via a EDFC system.

Mark would end up second in qualifying but he didn't get past the top 8, being defeated by Eric O' Sullivan.

We already saw this car in the event feature of the IDC drift event in Germany. The car belongs to Hankook sponsored drifter, Tim Tatje from Holland. In the IDC event he managed to get a second place finish behind Paul Vlasblom. In this event he got score of 83 during qualitying and sadly that wasn't enough to get him in the top 16.

Here we have one of the victims of the concrete barriers, Anthony Scott from Skylineparts. After a huge crash in his Nissan Skyline R34 GT-S, the car wasn't able to run anymore, so that was the end of his day. A real shame cause I really like the look of his car. Can anybody see what is written on the enormous exhaust pipe?

This car was converted from a drag to a pro drift car in record time. The car still holds the European record for fastest rotary on the quarter mile, with a 9.1 seconds pass. The car had been dormant for two years, when the owner of the car, Ross Juniper,decided he was up for another challenge. He started converting it to a drift car and asked Martin Ffrench if he could drive it. The car proved its worth when Martin drove the car in a top 16 spot with a score of 94.5 in the qualifying.

This Bee*R built R324 was piloted by Lennart Wanders, his nickname is ‘The Dutch Smoke Machine'. We can only blame the rain for the lack of smoke. He borrowed the car from a friend in the UK, but with a score of 85 he would end in 21st place

Paul Vlasblom hasn't been to a lot of events in the UK lately, but when he heard of the JDM Allstars event he was more than happy to cross the channel and compete against the best in Europe. He showed everybody why his nickname is ‘drift king' after he qualified first with a very solid run scoring 99.5 points.

In the top 16 he battled it out with Declan Munnely in a MK2 Escort, Paul took victories in both the rounds and he proceeded to the top 8. Here the European BMW touring went up against the Japanese JZX81 Chaser from ‘Bon Bon'. Unfortunately, Paul straightened in the first Tsuiso and a got a tie in the second, so ‘Bon Bon' came out victorious.

We met Olaf Commijs in Germany during our trip to the Recaro Days and the IDC event. He wasn't competing, though as his car had some engine problems. It was good to see him out at the JDM Allstars event, he qualified in 9 place with a score of 95 just behind Phil Morrison.

In the top 16 battle he beat Phil Morrison in the Driftworks 2JZ powered S15. In the next round Olaf took on Nigel Colfer, driving for Xtreme Autos in his Nissan S13.5. The man from Ireland took the win and kicked Olaf out of the tournament.

This Toyota KP61 Starlet belongs to Steven ‘Stiggy' Evans. The car is powered by a 2 liter engine sourced from a Ford Pinto. The car took on the big shots and qualified for the top 16 with a score of 93. In the top 16 he battled it out with his team mate Declan Hicks. Declan was driving his trusted JZZ30 Soarer but made a mistake in the 'one more time' battle so ‘Stiggy' had no problem in advancing to the top 8.

Shane O' Sullivan would be his next opponent. The small Starlet proved a worthy adversary against the SR20 powered S13,5 from Shane. After a close battle ‘Stiggy' won and that earned him a spot in the top 4.

In the Top 4 the small Starlet had to take on the large Chaser from ‘Bon Bon'. The smaller car had a advantage on the tight and technical track. In the first rounds it was a tie so a ‘one more time' was called. In the second round ‘Bon Bon' collided with the kerb giving the win to ‘Stiggy'. That ensured him a place in the final. But in the final he would meet his match.

There can only be one, we all remember this car right? The Rockstar sponsored AE86 from Eric O' Sullivan. It seems that this guy is unstoppable. In qualifying he ended up with 4 place at 97.5 points…. But in the tsuiso battles he was very consistent and aggressive, in the end it would be enough to be victorious.

What an amazing backdrop, even with the rain.

Go here for more info on the JDM Allstars Events

Thanks to Doristars and Paddy McGrath for the pictures.

Drift Demon Or Executive Express? Why Not Both…

On scots R34 its says trip hazard, all cars had to be fitted with an elbow to reduce noise levels

Good to see Stiggy right up there! I will always remember Stiggy drifiting with Tanaka and Kuma at the Pod round of EDC

Interesting to see the Dragon RX7 competing - Ross took part in a couple of rounds of Pro Time Attack in that beast this year too!

that dragon rx7, was that the same that dragon used as a drag car with the huge turbo sticking out the bonnet???

@ Kevin, you know there is a text under the images?

Remember it was at Wembley City, not the Stadium!

See you next year??

That wing on the Falken car surely has to be a joke.

great photos from jdm allstars! who took them?