After his success with the Sun Auto's Cyber Evo, 'Tarzan' Yamada has commissioned Cusco to build him a new Time Attack car. This time it's different because now he will campaign this car as Team Tarzan, and he will drive the car himself in the various Time Attack series. Cusco has brought in heavyweights like Tomei and Voltex to help build the car.

The car already had its shakedown, and the results looks promising. The cars that are used in the Time Attack on Tsukuba are getting better and better each year. There's more and more time invested in aerodynamics. One of the front runners is Voltex, and it's evident when looking at their latest creation.

Notice the radiator and the intercooler setup behind the front bumper and front fascia. The engine used is the proven EJ25. It uses Tomei connecting rods, crankshaft, camshafts and a head gasket. It has a Garrett GT3076R turbo, 4 x 850cc fuel injectors and a Motec M600 ECU. Powerfigures aren't available just yet but I expect it to be around the 500bhp mark

Most noticeable in the rear is the Voltex spoiler to give the car it's much needed downforce. You can also see how much wider the car has become with the new Voltex bodykit.

The wheels are sitting snugly under the wider front and rear fenders.

As you can see, the car had some serious body modifications.

Yep, that's a wind tunnel. I have seen more and more cars using this tunnel on the Mie University. How many companies do you know that will go to this extent to prove they are the best? 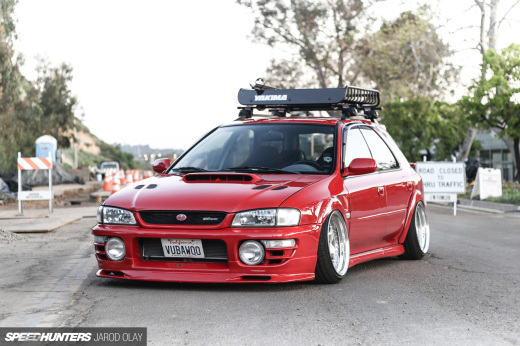 Jeroen, thanks for the post...but I think Mike already posted a week ago or so....

I don't see anything about this car when doing a search (upper right).

PS: Why the hell is there a Cyber Evo graphic on it!? Bah.

Gotta say, if everyone involved (Tomei and Subaru Technica) there combined for 500 hp, I'd actually be disappointed, unless the throttle response if phenominal. The time attack EVO's I've been seeing online are usually in the 6-700hp mark, with their full blown aero work.

My car is scarily similar in build to that. Tomei internals and a Garrett GT3076r turbo. My engine is going on the dyno soon, so we'll see if it reaches 500bhp, but we expect 400-450.

I swear I saw this car on this site not a while back.

Speaking of which. Speedhunters should feature Dentsport 180SX Maxi, that car is a beast !

this STi is very sexy, the body, the wheels, color, and stance make it really sexy

If the suspensions are not setup right, the weight distribution sucks, the tires are not right, you can have all the hp in this world, and won't accomplish anything.

And by the way that wind tunnel shot is a great wallpaper. HI RES PLEAAAASE!

i agree with Alex... it isnt about the HP, its about HP with toque... if you have no toque then your car isnt going anywhere no matter how much HP you throw at it... and think about it 500HP on a light car is plenty!!!

It's all about control, you really don't need massive horsepower figures if you can't get those pony's on the ground. I'd rather have less horsepower than a car I can't control.

I second jay in reference to his post about jacking other blog entries for your own personal commercial benefit. You guys are getting paid to post this crap. Can't you be a little more creative in what it is you post.

I 2nd what Eric said, 3rd what Jay said.

And this isn't the first time I've seen this.. use Google, get creative.

It's not that Jay is the only one who has acces to these kind of photo's, and I found these pics on the Voltex blog here http://voltexsuzuka.blog12.fc2.com/ So Voltex is the source and not Jay's blog.

I even consulted our man in the UK Andrew Barnes regarding this car for some more info. So I could provide you guys with more info. It's bound to happen that you will find items on this blog that's also posted on other blogs, everytime I post a certain item I will make sure I credit the company or the site where I got the story from.

Thats not what we were even trying to get across. But whatever, I will leave it as that.

This car actually belongs to TOMEI. NOT a CUSCO car and not a VOLTEX car.

I too also agree with ALEX. Lets see how these HP hungry people do on the track.

So "slimjkid" why dont you or any of your friends or shops or whoever, Bring your 700HP monster to the time attack and put your words down on the official time results to back your claim to "500hp is sooo.......8 years ago lol"

Funny 'cos the HKS EVO CT230-R runs some HKS Hypermax coilovers. Good coilovers, but not exactly the best sh!t available....whereas AMS, Crawford and the like are using Moton, Ohlins, Penske and the like (far more superior than the Hypermax).....yet, with their gob of hp, they aren't even close to the speed of the HKS EVO....

Its because it comes down to goblins. Whoever has the best and fastest goblins wins. Easy as that.

What colour is that blue, i love ?

The whole concept would look far more radical on a MK1 Scooby. You also need white tyre lettering to show off the rubber. Not sure about dumping the air intake on the hood. Chrome rims with contrasting black centres would look far more aggressive than those lady white wheels. Long live the P1.

i agree with Alex... it isnt about the HP, its about HP with toque... if you have no toque then your car isnt going anywhere no matter how much HP you throw at it..."

Tell this to Formula One guys, their engines have less max NM then regular European diesel engines

I think that this topic is a little bit more compilcated to be described in one sentence.