Meeting your heroes can be a unsettling experience, for both parties, and it almost unheard of that the encounter should take place on the turf that made the recipient of the admiration famous……….you won’t get to play golf with Tiger nor box with Ali……

Take a piece of tarmac in rural France somewhere south west of Paris. It used to be the main link between two cities and had a Route Nationale designation but with the opening of a new Autoroute it has slipped to D level.

The D338, the artist formerly known as RN138, has a little secret……….like a Clarke Kent it has a mundane, totally ordinary appearance for most of the time but once or twice a year it slips the bounds of convention and becomes……The Mulsanne Straight or simply “The Mulsanne”. Well for the English speakers anyway, the French call it Les Hunaudieres after the area that surrounds that part of the circuit but we will continue with Mulsanne.

The road takes its nickname from the village that marks the southern part of the present circuit of Les Vinqt-Quatre Heures du Mans. Of course now it is no longer just a straight piece of highway. Safety concerns and political interference from the FIA meant that two chicanes were installed in time for the 1990 race. It has to be said that top speeds were getting out of control……a madman called Roger Dorchy was caught in the radar at 405km/h (251mph) during the 1988 race.

For the drivers anything much over 300km/h is like mountaineers getting above 22,000 feet, it is a potential killing zone. Anything goes wrong, like a puncture or loss of bodywork, leaves even the greatest drivers riding their luck as much as their skill.  .

Adding to these risks was the state of the surface back in the late 80s with tram lines being worn in the road by the daily traffic which would cause the drivers all manner of problems at over 200mph.

So two chicanes were introduced and a tradition ended.

The relentless pace of development and the embracing by Europeans of the out of town shopping experience has led to a huge growth in the number of stores either side of the RN138. This in turn has forced the introduction of roundabouts to control the traffic and allow safe access during the rest of the year, though the original road is preserved and used solely during competitive activities.

Which brings us back to last weekend.

As is customary I travel down to both the Test and the Race Week with a writer pal of mine, Brian Laban. He is an experienced road tester and highly respected by the motor industry, thus we can usually get something a bit tasty to travel in. This time he came up with a DB9 from the folks at Aston Martin.

Given that there are four examples of this fine beast racing in the GT1 class it seemed high appropriate for us to make the story around the green machine. So on the Monday we took a detour to have another drive down this true temple of speed.

Which is how we could go and meet the road head to head on the terms that made its notoriety………just get in a car…a DB9 is perfect……and follow the signs out of Le Mans, direction Tours par RN, past the Carrefour, along the tram system, negotiate the maze of roundabouts and the amazing number of traffic signals, and then suddenly on your left is the bar at Terte Rouge. At this point the cars competing in the Le Mans 24 Hours leave the comfort of the permanent circuit and spill out onto the public highway, onto the RN138 to be precise.

The first difference with our drive is the speed. France used to be a speeders’ paradise as a largely indifferent Gendarmerie would ignore or not enforce the laws imposing limits. However all that changed a few years ago, mainly as a response to the carnage on the roads, with the death toll that was over 6,000 per annum. Cynics might also say that the crackdown was partly inspired by the massive tax revenues easily obtainable from motorists as evidenced by the UK regime. Now everyone slows, getting caught 30km/h over the limit will see you walk for three to six months, 50km/h over and les flics will impound your car – we were not sure how we would explain this to HQ at Gaydon.

Back on the RN138 the potential presence of radar traps and the density of traffic keeps everyone in line and we are no exception. The road stretches ahead till the first landmark come into view with the two restaurants, Auberge Hunaudieres and Shanghai des 24 Heures. In the real world of racing these are markers to start thinking about the first chicane and pulling the speed back down from near on 200mph and how to minimise the time lost following slower cars.

Then past another roundabout and back on the real black stuff heading down towards the second chicane with more shops and shopping centres dotted around the crossroads, again the top runners will be touching 200mph on their approach to the second diversion.

Out of the chicane and on to the Kink as this fearsome spot is known, before the chicanes were built this was taken flat in top and the cars got light as downforce evaporated over the ridge in the road. This place had been the scene of many accidents and given the velocity at that point they were always serious, occasionally fatal. Even in a road car there is a considerable change of direction. Lord knows what pulling nigh on 250mph at night would be like, not to mention dealing with the traffic and slower cars.

Then on past the Arbor d’ Mulsanne and onto the brakes in preparation for the Mulsanne Corner, the site of the old signalling pits and the point at which the track starts the trek back to the pits and the end of the lap.

If you get the chance to try this yourself do…………..there are ghosts in the trees and along the barriers, the spirit of the world’s greatest race is found down the Mulsanne……………….

We have a couple of You Tube links of Le Mans and the Mulsanne, for you to enjoy.

1990Nissan RC90 Qualifying run!  (with a 1100bhp qualifying engine it reached 227mph on the straight WITH the chicanes) 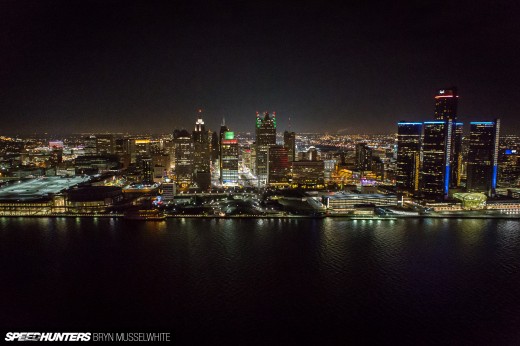 Detroit: The City That Cars Built

Just saw that video of the Nissan RC90, Mark Blundell really must have balls the size of coconuts. Really impressive

Wow, intense is the only word to describe that RC90 ride

I live in Chartres

Another great read John. Thanks.

Cool post John, we were directed down the Mulsanne straight as we left our campsite on Sunday, strange to think that only an hour or so before cars would be flat-out at 200+

Having never been to LM before the weekend I was disappointed at how difficult it was to reach mulsanne, arnage and indianapolis during the race

I really wanted to get some photos from there.

So frustrating seeing you guys with media passes blitzing about behind the barriers on mopeds with all-access!

Maybe one day I'll get me a media-pass!

Tom, I'm with you regarding moped/scooters.......I'd ban the lot of 'em. They nearly kill you in the paddock and the riders think that they have right of way at all times...........plus I'm don't have one.

As to getting around..........I'm sure there is a bus service from the main area to Arnarge during the race..........I used the press shuttles to get to Porsche Curves on Saturday, then walked trackside to Indianapolis..........the whole track is much more restricted than it used to be............even the media were served with a blanket ban on going onto the Mulsanne Straight from Wednesday onwards. There was a high level of concern that a car would take off............

Did you enjoy the event overall?

Yes I loved it of course! A bus to Arnage does ring a bell although typical French organisation meant that it wasn't obvious where and when you would get it! I'll make an effort to check next time! Oh the luxury of a media shuttle!

Our tent was within walking distance of Porsche curves and as it turned out it was the only place I could point my lens over the top of the fences!

I got a few cool shots from there, i'd love to know what you think of them given my restrictive viewpoint and budget equipment!

I'd really love to be on the other side of the fence one day! Do you ever need assistance on shoots?

Hope that you have a chance to check my shots out!

I was at the 1990 race, had blagged my way into the Nissan hospitality area in Le Village, drinking Japanese beer when it became clear that Blundell was on a very hot lap. The atmosphere could have been cut with a knife as Blundell's lap unfolded. It was like watching Rosberg's 160mph lap of the old Silverstone (Fastest F1 lap at the time). It was similiar to watching a tight rope walker. You know he shouldn't fall but you are drawn to watch because he just might.

I am being greedy, I know. The exercise for Photos of the Year was supposed to be a selection of my fav

Our own Michael Jennings does his bit to stave off a new Ice Age by his almost obsessive amounts of globe-trotting, and I cannot compete with that, but I did my little bit at the weekend, as did a lot of other crazy people, by attending this event in

those annoying chicanes still can be pass through rite? at least in gt.