Come on! So hot! Everyone who saw the movie Transformers flipped their lids when they saw the new Camaro! To us, the new 2009 Camaro coupe concept in the movie was even hotter and sexier than Megan Fox, the actress who played the lead. (Although, Megan is pretty damn hot, so she gave the Camaro some good competition.) Just imagine my excitement when our office phone rang, and I was asked to shoot this 2010 Convertible Concept; a new topless version of that same sexy Camaro!

I love the front end of the car, which reminds me of a Daruma Celica (1972 TA22 Toyota Celica) or Hakosuka (1969 KPGC10 Skyline) because of the recessed headlights, and big eyebrow-like hood overhang. Although I can't stop thinking of vintage Japanese cars, the engineers at GM obviously weren't taking design cues from old Japanese cars; this new Camaro Concept was built as a retro tribute to the 1969 Camaro. I just love the styling put into this project!

Although GM hasn't publicly declared what engine it's gonna have, I have a sneaky suspicion that it's going to be something like an LS2 engine from the new Corvette, which makes plenty of power, and is very popular in the GM engine lineup nowadays! But then again, I don't know the official word.

This interior is so sexy it's ridiculous. Everything from the steering wheel to the dash gauges, to the shifter to the pedals; to the climate control to the vents; and obviously the contrast stitched seats. Oh my God. Gorgeous.

Okay, who's with me? I love this gauge cluster! I freaked out the first time I saw this. They have deep dish, concave tach and speedo gauges?! BRILLIANT. I love it! The brushed aluminum finish, and backlit gauges are definitely something I'd love to have staring at me every time I take this Camaro for a spin. Wow, I'm in love.

Those taillights look more "Corvette" than "Camaro" in my opinion. Also, even though I like the exhaust tips on the car as is, I'd probably like it better if they had different option where you didn't have this exhaust rear fascia integrated into the bumper, as I know alot of aftermarket gearheads will be changing it anyway. I like the subtle rear wing on the trunk too! Very nice.

The interior of the car looks so stylish and retro when you look at it from the rear! It has an old Camaro feel to it, with the black leather interior, while the orange contrast stitch gives a subtle updated look. Such a great design. 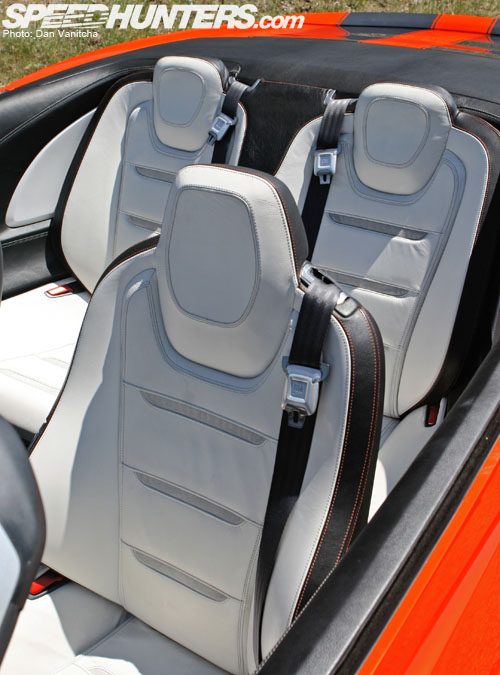 But just when you're done admiring the retro look from the back, they flip the script and make it white when you look at it from the front! I love the subtle inset details on the seat, and the shape of the headrests, and the contrast stitch on the leather! Damn! So awesome. Also, notice the old school GM seatbelts?! I love it. 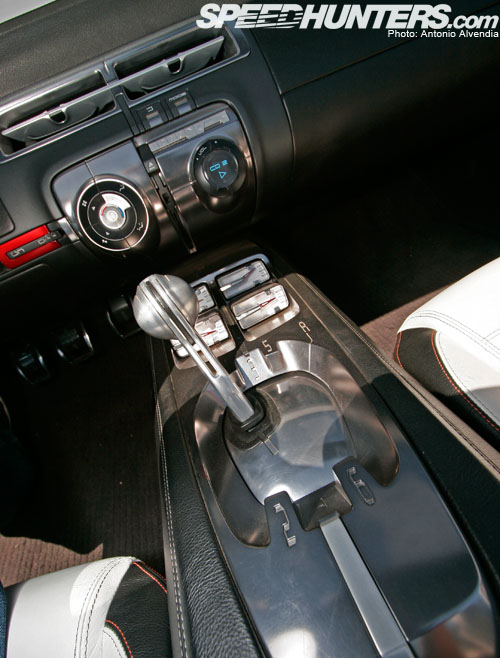 The way the shift pattern is displayed on the car is pretty cool too. I
like the way the 1,3,5,and R are engraved into the top of center console
itself, and the 2,4,6 is engraved onto the bottom. It looks pretty modern and stylish. Of course the style of the shaped bezel going around the shifter
is also super cool in my opinion! 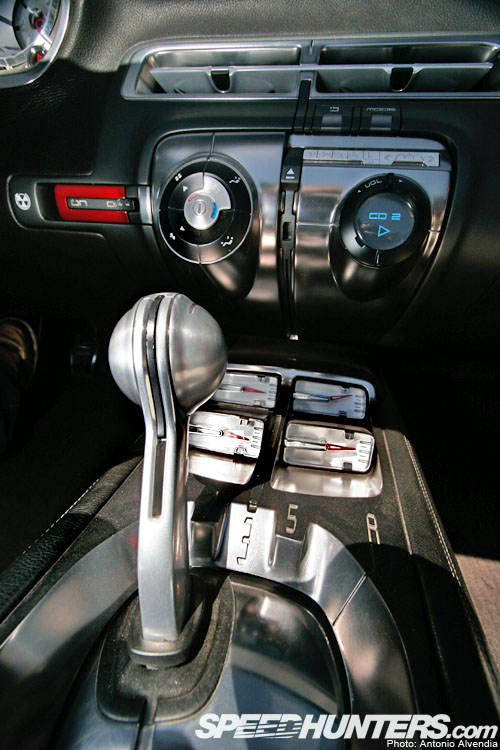 I like the stylish little gauges to the front of the shift gate. They look so cool – modern, yet retro. I love it!

Also, check out the cool audio "volume" selector and display, as well as the climate control selector. Very, very cool!

Just look at these humongous OEM wheels!!! They kind of make the Camaro look like a real life "Hot Wheels" toy to me, because of the shape of the spokes. However, these wheels aren't for something kids ought to be playing with… the Camaro has humongous 21 inch wheels with 275/30/R21 tires up front, and even bigger 22 inch wheels with 305/30/R22 tires in the rear. Damn, even just saying those specs, it sounds crazy!

Oh yeah, BTW… it has 14 inch brake rotors with 4 piston calipers. From the factory! Insane.

The aftermarket wheel and tire manufacturers better step up to the plate with more options for bigger sized wheels for cars. If I owned one of these Camaros, I sure as hell wouldn't want to be rocking some 22" truck wheels with a TIS logo on the side of my car. American wheel manufacturers, you guys need to get to work asap!

I want one of these Camaros pretty bad. Who else agrees with me?

I agree with the TA22 similarity however do you think that Chevrolet will actually have the cojones to put this into production with all the bells and whistles!? If they do then I may have more faith in GM.

Thats a future classic right there.

Love the gaugecluster and the shifter, and pretty much all those nifty details.

I wonder how much one of those costs..

this is hot but Megan Fox is still hotter! lol yeah i see the similarity in the front end and the celica.

The gauges and center console design are gorgeous and very special, if this layout goes into production it'll blow everybody's mind. Overall this Camaro is the only one I consider (out of all the other retro modern cars, Mustang, etc) successfully evolve the oldie classic into modern day muscle.

Damn, see I wish Toyota could put together a new RWD Celica that looked hot and retro like THIS! Instead of all the FWD stuff they currently make. So sad, I love 70s/80s Toyotas so much, but in the past 10 years, they haven't put out many cool cars for performance guys in the USA. I do like the FJ Cruiser and the new trucks are getting alot better, but still...

gearbox and heads-up display are trippin'

Camaro5 is your friend. a really good forum full of spy shots of the Production car.

This car doesn't even come close to Megan Fox, shame on you Antonio

Did you get to drive the car?

gauge cluster seems like it would be hard to read, at least during the day... punish and enslave.

There taking to long to get this car in production, buy the time it's ready there will be a least a half of dozen other choices the consumer will have, that's my opinion...

Dope shots Antonio, throw the hardtop on it, maybe some gunmetal Vette rims and I'll take one. Those original GM seatbelts are a blessing and a curse though, they definitely look cool but for anybody who grew up crawling into a GM car in the 80's and burning themselves on metal seat belts, this is a scary flashback to bad childhood memories haha.

I'm sorry to hear about your painful childhood years Pat. I had no problems with the plastic seat buckles of my grandfather's Toyota. "Oh what a feeling!"

I don't think there were too many good memories in that Chevy Celebrity wagon (That's Spanish for: Hot Rod). The only good thing it offered was that rear wagon seat so you could pretend to be a tailgunner in the back haha.

Months, years, almost decades (well, it feels like it!) after the concept was shown, the Production Chevrolet

I have already gone done to the dealership and requested the first convertible Camaro that they will be getting, and in what colors.........why orange with black striping, of course. Love this car, been waiting for a few years for it but the wait was worth it!