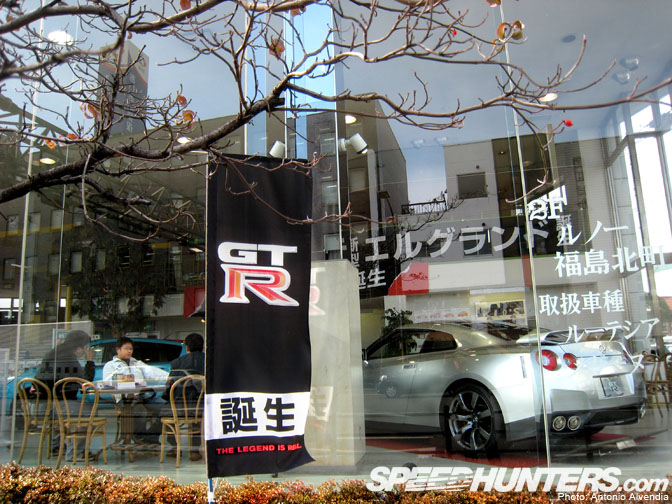 Not too long ago, I had the chance to go to the Nissan dealership in
Fukushima Japan with Nobushige Kumakubo and Mitsuteru Igusa from
Japan's legendary Team Orange. Since I had never had the chance to see
a GTR in a Japanese car dealership at the time, I wanted to check it
out.

We all took turns sitting in the car, while Kumakubo and Igusa
whispered to each other in Japanese, saying phrases like "hehhhhhhh…"
and "iii ne!" while the Nissan salesman danced around them, trying to
point out the car's features. I started walking around the car, taking
pictures and whatnot, when suddenly, Kumakubo randomly blurts out,
"OK!"

And as I looked up from my camera, I looked directly at Kumakubo,
who had with a huge smile on his face. He just bought the car!
Meanwhile, I'm thinking "Whattt?! He just decided to buy the car???
Just like that?" Not to mention, Fukushima Nissan's "Plemium Edition" GTR on display was selling for a cool 8,736,000yen. Alrighty then.

So don't be surprised if you see Kumakubo rolling around Japan in a
fresh new GTR. When I asked him if he was buying this GTR for Team
Orange's world wide drift demo and competition use, Kumakubo just
looked at Igusa, then looked back at me, shrugged his shoulders and
said "Tabun!" (maybe) with a laugh and a huge smile on his face.

I guess we'll just have to wait and see! Jeez. It must be nice.

I'd buy a car like that in an instant, if I could. Hope he likes it.

Put some trays under the rear wheels, then it'll drift proper!

tha`s what i talking about!!!

the new GTR in the hands of the pros!!

Wow...I just need to make his type of money

A new GTR... What does it feel like buying one of those things?? Kinda like your first real kiss with a girl? Being trusted with the keys to the office for the first time? Helping out a friend at a time of need? Dunno, but then, in a month's time when it gets delivered, you get to drive it - what the hell is that like???

It's different than buying a Ferarri or something - this is a car that you can drive everyday and stuff, in normal life... Blows my mind.

Since there aren't really a lot of events going on right now, I thought I'd look through my external