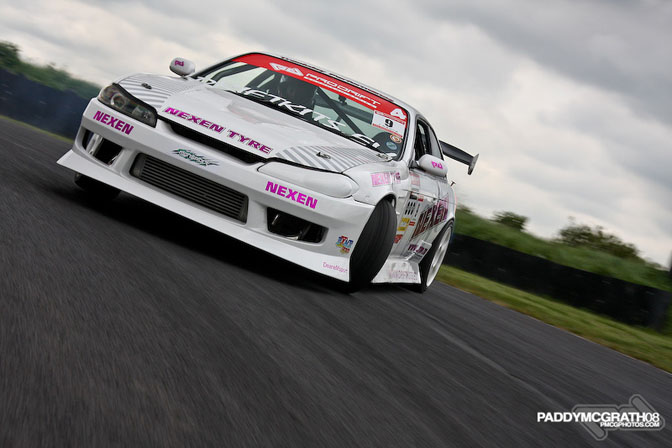 There are a few photographers in the world that I admire and one of those is Paddy Mcgrath. He is the main shooter for the Prodrift Series in Europe. Round 2 was held on the Teeside Autodrome in the UK and turned out to be spectacular event to say the least. The top drifters from Europe were present to show the crowds why they are the best.

In the picture above you see James Deane who is only 16 years old, he would finish second. He drives this Nissan S14,5 with a full Uras type 4 kit and S15 front end conversion. The engine is running HKS turbo's, 550cc injectors and a 3" downpipe.

People in the US should know this guy from the Formula D series, Darren McNamara. He would finish first with his trusted AE86.

I met him once when he was invited to judge a drifting event in Holland, very cool and down to earth guy.

What is a drifting event without the lady's?  Linzi and Linda are the official Prodrift babes, more info about them can be found here

This is Eric O Sullivan with his Rockstar sponsored AE86. Not sure what Antonio's thoughts are when I say this car has had an engine transplant. The original engine has been replaced in favor of the higher revving F20C engine. I have heard this car before and let me tell you it's loud!

Bon Bon battling it out with Danny Ayles in his R33.

Ninth place belonged to Christy Carpenter. I really have a softspot for drifting S15's!

Phil Morrison of Driftworks had been hard at work to get his S15 with a 2JZ to the event, but unfortunatly the car wasn't ready in time. You can follow his work on the car here. Luckily for him, driftworks has this R32 as a back up car so he still gets his much needed seat time.

I can't wait for round three in Sweden

Pretty sure it was Bonbon vs Dan Eyeles not Shane Lynch matey, nice write-up thought

Yeh, it was Danny Ayles who beat Bon Bon. This was a cracking event and Martin Ffrench's Hibino style backwards entries were phenomenal. Flat Eric is possibly the most consistent and clean driver I've ever witnessed at a drift event hitting clipping points with good angle and speed time and time again. Darren, for me, kind of snuck in under the radar during the event to take top honours, he just went about his business and got the job done with minimal fuss.

An awesome event and well worth being sat in a car travelling 800 miles in total to go and watch for the day. Next up the British Drift Championship at Norfolk Arena tomorrow and the European Drift Championship at Silverstone on Sunday where we'll hopefully see the monsterous Driftworks S15 hit the track sideways for the first time, its not to be missed.

Than I stand corrected guys, I will change the story. I based my info on the entry list provided but then I must have made a mistake.

Yeh, there are two Japspeed R33's. Shane Lynch drives a white one, Danny Ayles drives the gold one.

I actually finsihed 9th, in the Red 180sx 1JZ, christy didt qualify for the top 16th