The annual RAUH-Welt Begriff New Year Party might well be the best way to start exploring Japanese car culture during Tokyo Auto Salon week. I say this, because it’s an event that anyone can join in on.

Since the last time I attended an RWB New Year Party in 2020, I’d been looking forward to coming back. So, when I heard that the 2023 event was being held at a shrine, I could not keep my excitement in check. Flights and accomodation were booked; the New Year couldn’t come around quick enough for me.

In Japanese culture, early January is a time that many families come together and visit shrines where they wish for a prosperous, happy and healthy year ahead. I was amazed that Nakai-san managed to secure such a venue for this year’s RWB party, but it turns out he is close friends with the custodian at Kashiwa Jinja-Shrine in Chiba, just 15 minutes’ drive away from RWB HQ.

Leading up to the event, a 20-car limit was announced, but after seeing the location I wasn’t so sure they’d manage to fit that number in. My suspicions were confirmed on the night, with only 13 cars admitted given the sheer number of people attending. I arrived early to see the cars roll in, which is always an amazing sight.

When I attended the 2020 RWB New Year Party, Nakai-san’s 997 conversion was still a prototype, so seeing a few customer cars together was awesome. They look amazing, especially the cabriolet version. It’s definitely a new era of RWB moving forward, although it was also great to see the 930, 964 and 993 RWB classics.

While I saw Nakai-san early, he disappeared to pick up a special guest. No one expected Cody Walker to make an entrance, and that really got the crowd going.

Once everyone in the RWB family had arrived, speeches were made, including a few words from the shrine custodian, followed by a Miko-mai, a Japanese traditional Shinto ritual ceremonial dance, which I’ve always wanted to see in person.

As I hoped it would be, the 2023 RAUH-Welt Begriff New Year Party was a great way to start Tokyo Auto Salon week. Just being able to visit Japan again meant the atmosphere was electrifying, so I know it’s going to be an exciting year ahead.

The 2023 Tokyo Auto Salon on Speedhunters

One of my fav photographers on here, the photos speak a thousand words!

Love the RWB Porsches here! And love the photos!

My kind of event!!! Those RWBs are slick as hell! What kind of dog is that in photo 8? The red and Wassabee green cars are sweet!! There's a shop in Highland Park, NJ near my house called The Eternal Shop and they work on all types of cars. Had this one there.(pic attached.) 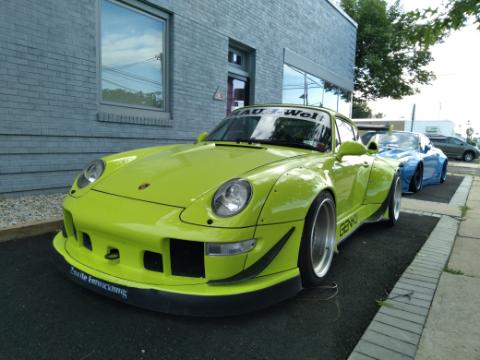 I have no idea what kind of dog it was.. looks like a Pekingese? That's a sweet 993!

Who knows why their lil' store on 4-8-3 1F Komaba Meguro Ku, which was opened with Voomeran, closed?

I'm not sure either, but I suspect it was due to the unfortunate event that happened the world and closed Japan for 2 and half year!

997 is a RWB natural. Chefs kiss even tho it's all "normal" now, just beautiful!

How wide is a 997 RWB? A stock one is not exactly narrow, unlike the air cooled ones.

Another great article, Rick! This epitomises my love for this side of Japanese car culture - everything just seems so much more special in Japan.