Nissan versus Toyota, it’s an age-old rivalry that has seen both sides fight tooth and nail for technical dominance and ultimate street cred.

But why settle for one? If you have space on your drive, who says you cant have a Micra and a Starlet? Or, if you’re in Japan, where parking is at a premium, why not combine the two into one beastly frankencar? That’s exactly what Ryouta-san has done with his now Toyota-powered Nissan Fairlady, and it’s glorious.

I met up with Ryouta-san and his good friend and fellow Z32 owner Yuichi-san one chilly winter’s afternoon to check out their very different cars.

At first glance, you might think you’re looking at two 3.0L V6 twin-turbo Fairlady Zs, one in R34 GT-R Bayside Blue and the other in Z32 Platinum Mist Metallic. For the most part you’d be correct, but chassis codes are just about where the similarities between these two cars end.

For starters, Yuichi-san’s blue Fairlady is tuned by Stillen, the tuning shop set up by legendary Nissan driver Steve Millen, while Ryouta-san’s car has been Prius-swapped, now making around 400hp at the rear wheels.

Swapping in a Toyota Prius radiator fan only seems natural considering its task is to cool down a 1JZ-GTE  from a Toyota Chaser Tourer V. You didn’t really think it was a Prius engine swap, did you?

The two cars could not be more different. In fact, while researching this story there were four or five other Z cars that I wanted to include in the shoot, but they were unable to make it. Within the group, there are more Z car variations than there are covers of Hey Jude, each one having been customized to suit the owner’s unique style and vision.

Yuichi-san has owned his blue car for 21 years, which probably explains why it’s so refined, clean and, dare I say, a picture of perfection.

Under the hood you’ll find the factory twin-turbo V6 DOHC VG30DETT, although it’s now being managed by a MINE’s ECU, tickling stock power up to around 300hp. For a street-driven daily, this is plenty.

Combined with all the other little refinements that have been made, the driving experience has been increased to a value which renders numbers meaningless anyway.

Sitting inside the – by ’90s Japanese sports cars standards – luxurious cockpit of the Fairlady Z, it’s easy to understand Yuichi-san’s build choices. He hasn’t tried to turn the car into something it’s not; he’s simply made it the best version of what it already is.

The sum of all these parts is firmer, more direct handling and a generally engaging driving experience.

There’s one more special feature that I missed as we froze to death on this windy rooftop car park – an Audi TT retractable spoiler. Of course, I did notice the spoiler, but it was so well integrated that it looked completely OEM. That’s a really nice little touch that highlights the thought that Yuichi-san has put into creating his ultimate Z32 Fairlady Z.

And now, for something completely different – Ryouta-san’s 1JZ-GTE-swapped (plus Prius radiator fan-equipped) bruiser, which couldn’t be more different from Yuichi-san’s refined cruiser if it tried.

This is the car that ordinary Fairladys have nightmares about.

Once upon a time the car’s original VG30DETT was in desperate need of an overhaul, but instead of just doing the obvious thing, Ryouta-san says it was cheaper and much more entertaining to swap in a completely different engine. Plus, in 2017, when the conversion was completed, there weren’t too many people doing this sort of thing.

To fit the Toyota engine into this Nissan, Z32 engine mounts are used with Chaser transmission mounts, a custom tail shaft and the stock Z32 differential. Interestingly though, no physical modifications (read: metal bashing or cutting) were needed to accommodate the new block in the bay.

The 1JZ, with its single HKS GTIII turbo and front-mounted Blitz intercooler, is a far cry from the stock twin-turbo V6 it came from the Nissan factory with. Paired with a R154 5-speed manual gearbox (also from a Chaser Tourer V), you’re looking at a very different powertrain indeed.

Inside, the Toyota 2.5-litre block has had a full overhaul, and the cylinder head now benefits from Tomei high-lift cams. With 20psi of boost and the whole shebang tuned through an HKS F-CON V Pro ECU, it’s making good power for street use.

Ryouta-san’s car sounds exactly as you might imagine – angry, raspy and not at all like a Z32 Fairlady Z/300ZX. Naturally, there’s a custom manifold and front pipe to mate up with the rear cat-back section, all exiting via a Zees Project muffler. Although, there’s not much muffling going on.

Ryota-san told me about two real benefits that have been gained from this Toyota/Nissan mash-up. Firstly, the Fairlady now tips the scales less 70kg, which makes the power-to-weight ratio more entertaining. And secondly, because of the smaller engine capacity, the car now falls into a cheaper tax bracket.

Aside from the engine swap, the styling of Ryota-san’s Fairlady Z is absolutely killer. He’s running 17-inch BBS LMs, 8-inches wide up front, and a meaty 11-inches wide out back thanks to MA Service in Shizuoka who rebuilt them with fat new barrels. The 4-pot Brembo callipers with 355mm rotors up front are Ferrari F50 spec.

The Bugatti-esque front bumper is from Explosion, the rear bumper and massive aircraft wing are from Bomex, and the diffuser is from Uras. The rear has taken styling cues from a Corvette C6, and has been blacked out with custom LEDs making everything look fancy and futuristic.

Inside you’ll find some comfy Bride Zeig III seats, which given the 300km/h speedo are hopefully somewhat absorbent. There are seven other Defi gauges for maximum distraction while driving, and a five-point cage from Saito Rollcage in Saitama, which is beautifully integrated and barely noticeable except for the rear cross bar.

I can’t help but feel as though Ryota-san has transformed his Fairlady Z from a land boat into a jet fighter, while still maintaining a level of class and comfort that the Z32 is loved for.

So which one does it for you – the cruiser or the bruiser?

Stolen, Recovered & Rebuilt Better Than Ever 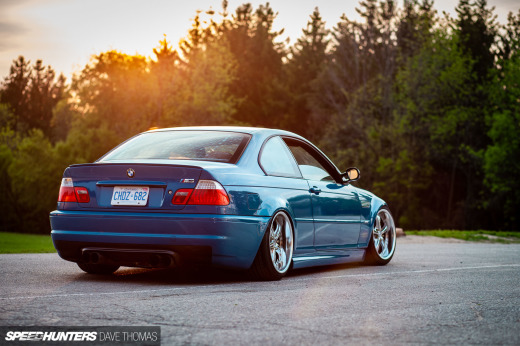 Street Track Life: An E46 M3 With A Turbo Surprise

Two unique ways to do a Z32

I love that this article happened! I follow Yuichi-san on Instagram, his Z is so pleasing to look at. Z32 ftw!

As much as a dig that engine swap, my heart floats towards the near stock cruiser! Aesthetically, Nissan got this big old girl right IMO, and the blue GTR respray looks awesome. I'd love to own a bone stock example as a daily. So much 90's cool.

Great article, Toby! The blue Z engine looks like the mechanical inside of the RX-78 Gundam

The blue one is nearly perfection (except the auto box) and the TT spoiler is a genius addition IMO. I almost bought a Z32 back in the noughties and I've been kicking myself ever since.

Great article, great pics as usual Toby.
But man, what is it about the Z32's front that makes it look so strange?

I am pretty sure its because of that headlights that make the car look kinda dumbass. The inside layout of them bugs me for real.

Everything was calm until I got to the red interior pic with the gauges. Good lord, how beautiful.

Have followed Yuichi on IG for ages...definitely an inspiration for my own Z32...I love what he's done with the platform.
here's an old video interview and his story: https://www.youtube.com/watch?v=MfX4j5tpCbA