SHARE In The Middle We Stay Calm & Just Drop Bombs

For as long as I can remember, I’ve been prone to falling into metaphorical rabbit holes. At this point I’ll willingly admit I’ve spent countless hours researching a myriad of things I’ll likely never act upon.

It should come as no surprise that anything with wheels really sucks me in. Full size, scale, electric, nitro, wind up, push cart… it doesn’t really matter. Whatever it is, if it’s got wheels then best case it will cost me only time, worst case money as well. To some, time and money are one in the same, but for my continued sanity I try and keep them separate.

Building a traditional lowrider is probably something I’ll never get around to, but I refuse to let that practical hiccup stop me from continuing to learn more about the lowrider community.

As I touched on in my recent introduction to this automotive subculture, in addition to being one of the longest standing genres, there are several niches within lowriding that are each incredibly unique in their own right.

Much of the lowrider community represented in mainstream reflects the ‘more is more’ approach. Wire wheels, multiple subwoofers, murals, three-wheel- ready hydraulics… things of that nature. With so much of that on the forefront it’s easy to forget that a subsection of the lowriding community actually flirts more closely with concours-level restoration than it does outright modification.

In the fruitful lowrider family tree, the bomb genre sits at the top as OG. It’s calm, cool and collected, but still able to two-step with the best of them when the right tune comes on the radio.

As a TL;DR explanation, bomb styling could be considered the forefather to the OEM+ subset. Typically, but certainly not always, base platforms are GM vehicles from around 1936 to 1954.

In contrast to the later-model lowriders most people are more familiar with, bombs are rather original. Original power plants, original body lines, and most importantly original trim.

The  niche’s name is rumored to be a short form of bombástico. My Spanish is non-existent, but research shows that means ‘boastful’ or ‘extravagant’ en Español. Origins and direct applications of the name seem to vary depending on where you look, however, so don’t take that definition as gospel.

Regardless, bombs salute a time when the cars coming from American manufacturers honored their art deco inspiration with swooping fenders and ornate body trim.

Bombs also focus, fairly obsessively, on original accessories. Where a drift car owner may get excited about tsurikawa rings and a VIP enthusiast on obscure factory-branded personal grooming kits, in the bomb world the breadth of available accessories is far and wide.

To ‘ride a proper bomb all your trim needs to shine, and be accentuated by bumper guards and additional fender strips, moldings, spotlights and fog lights. Safety stars are also common, as are Fulton window visors and ice-filled air coolers.

Inside, vent shades, steering column fans, mirror shades, thermometers, racoon tails and radio accessories sit at the beginning of the rabbit hole. Those who want to really lose themselves opt for cruising accessories as well. Beverage coolers, trailers, push carts, the possibilities are truly endless…

It can get pretty crazy and these accessories are often traded completely analog. Want the best condition piece at the best price? You better hit your local swap meet early.

Bombs don’t need to be on the ground, and they certainly don’t need to hop – they just have to look right and, more importantly, be up for a cruise at any given opportunity. Fair, a lot of the high-tier lowriders don’t get driven every single day of the week, what with polished brake component and undercarriages, but more often than not the owner of a bomb has a car that’s been built to drive.

Usually with the entire family in tow.

That’s why as polished as these cars often are, if you look close you’ll see the odd stone chip, or find the occasional drip pan stuffed underneath.

As time has gone on, and the cars have found there way into the hands of younger enthusiasts, you’ll see both original, and updated accessories enter the picture. See the car above, which features modern subwoofers among period-correct trinkets.

At The TakeOver Super Show held in the Anaheim Convention Center, two cars really stood out for embodying the bomb ethos. The first is Christine, a 1949 Hudson Brougham.

Like so many cars in this community, it’s an heirloom owned by Marisa Rosales. She inherited it after her boyfriend Arturo passed away. He had purchased it from a friend who’s also unfortunately no longer with us. The car’s name comes from the works of Stephen King, representing a beautiful but deadly female.

The car is absolutely stunning with the paintwork being my personal favorite aspect. I’m a ridiculously huge metal flake fan, and candy red flake is easily up there among my most loved combinations.

In the trunk sits a very traditional hydraulic setup consisting of parts from decommissioned airplanes. These setups, which despite often being slower, larger, and more expensive than their modern counterparts, are highly sought after.

It’s a head nod to the pioneers of the genre. With no automotive-specific applications available, outside of the box thinking was required to have a car that could ride low, but also lift up to appease Johnny Law.

Welcoming Marisa inside the car is an immaculate reddish-brown interior, with matching red headliner. With this build, no fabric swatch or paint chip was used without taking into account the intended final product.

Remember what I said about detail in my first post? Lowrider enthusiasts are detail kings.

The second bomb that really took us aback was La Bella, a 1940 Packard 110 convertible.

Keiron, nor myself, claim to be Packard aficionados, but this entry from Eastside LA’s Old Memories Car Cub is a real gem. Compared to Christine it’s a bit more understated, but no less impressive.

The car has been painted a rather unique mint green and features custom striping and leafing, including a tastefully done trunk piece.

The final bit of icing on the cake was the resto-modded interior. It’s stock, for the most part, but lovingly re-trimmed. Again, the color choices here couldn’t really be better. Lowrider enthusiasts are often criticized for ‘ruining’ cars, but all I see here is expert-level restoration.

If it sounds like I’m giving this community too much praise, I don’t apologize. I already warned you when I started this series I’m going complete fan boy. Despite my years exploring the lowrider rabbit hole, I feel like I’m still just scratching the surface.

I have tried to like this era of cars. It just doesn't appeal to me for some reason BUT it's hard not to appreciate the craftsmanship behind these cars.

Great coverage of some interesting cars.
The aftermarket parts' scarcity is one aspect of bomb-building that many don't fully appreciate. Ya can't just "buy now" off E-Bay; ya gotta make friends with elderly hoarders, search through antique shops, get up at 0-dark-thirty to attend swap meets, & so on. Kinda like hunting for period-correct prewar Ford flathead speed parts or NOS British sports car parts.

0-dark-thirty is the best time for parts hunting provided you can wake up for it.

Love this era American motors, and this whole genre. That Kandy red is sublime.

No offense, but I'm just curious why no-one blinged and stanced an old camper. Wrong genre?

I think at this point everything has been made into a lowrider, you'll see a few different platforms in the next post which is more on the modern side of things.

Is the red car ('Christine') not a lead sled? Is that still a thing?

Sleds are a little different. A lot of it comes down to wheels, paint, and modifications. Sleds for example are almost always chopped, shaved etc.

Also often black, very black. But they borrow styling elements from each other often. 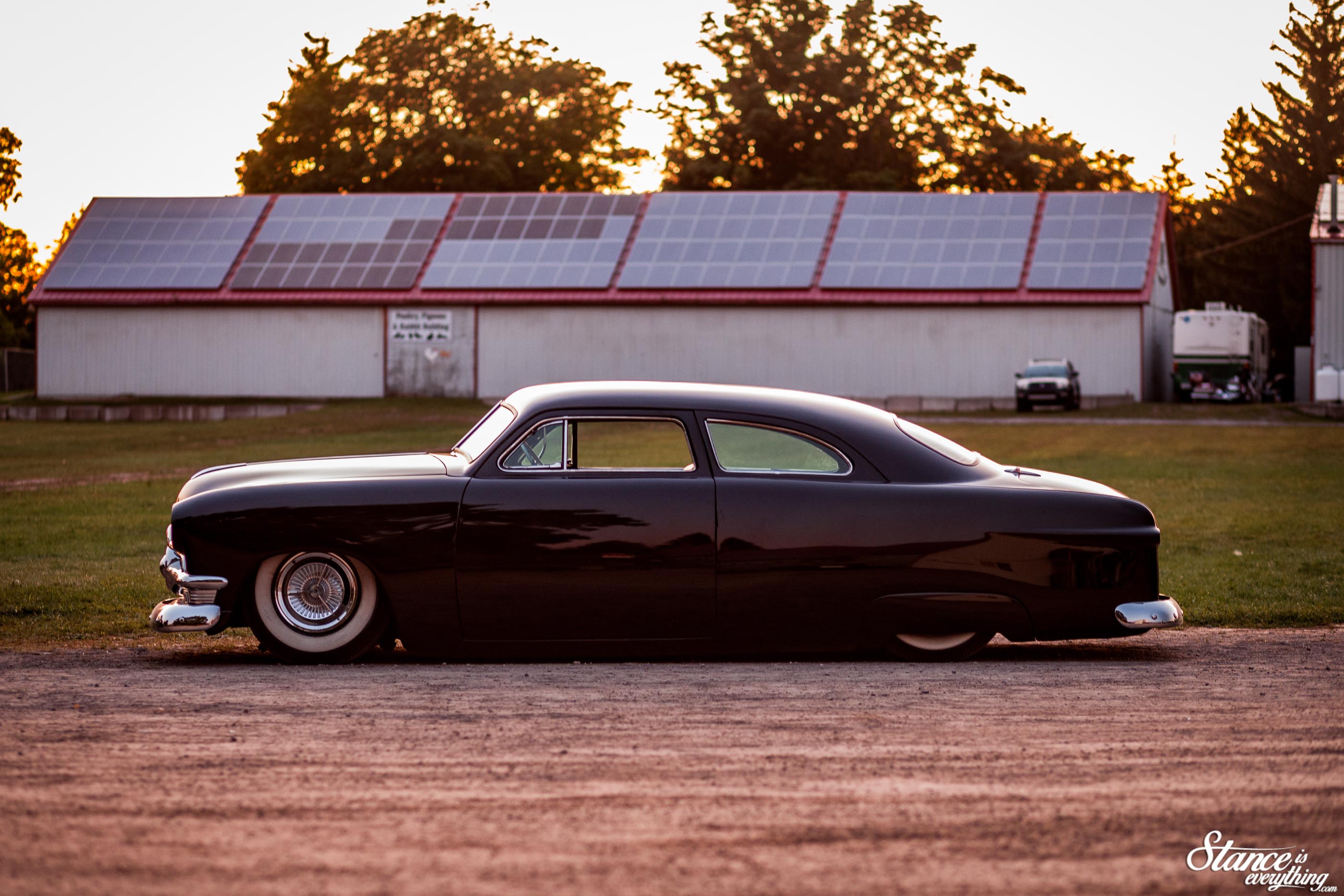 Thanks. Only ever seen one irl. A Buick. Was black

yo yo yo wiggity wiggity dawg

In Spain, cars of this era (modified or not) were commonly called "haigas" due to some new riches that were quite simple and said to the salesman "quiero el mas grande que haiga" that can be roughly translated as "I want the most big you have".

If you want some genuine 30s-50s accessories traded 'non-analog', try me - I supply a lot of these guys (from France - go figure!)