And by modifications I don’t mean a wheel change and a wrap. I mean properly-built cars with turbocharged engines that generate power levels well into the four figure zone.

While the US owns engine tuning and making Lamborghinis ridiculously fast in a straight line (visiting SheepeyRace and Underground Racing is definitely on my bucket list), Japan has it won when it comes to the aesthetic side of things.

And for some reason it just seems so natural to do a body conversion like Liberty Walk offers for the Huracán. For a Ferrari I get the whole sacrilegious thing, and how the purists could get all upset, but for Lamborghinis, not so much. In fact, I think people that get into these sort of cars actually want to customize them in some way or another.

Which brings us to the LB Silhouette Works kit, the third offering in Liberty Walk’s Silhouette series that was first introduced with the Ferrari 458 we saw last year.

Out of the Ferrari, the R35 GT-R we’ve just seen, and this – the baby Lambo wins hands down for me. Perhaps, in the truest sense of the term, this ‘Works’ kit is more akin to the race version of the Huracán than the other two are to theirs.

With its integrated boxed fenders it shouts ‘GT3 race car’ to me, and to have that sort of look on the street, well, it must hit the nail on the head as these LBW conversions are selling extremely well.

While a simple two-tone color is good for some, if you are doing something so daring you might as well go the whole hog. That’s where the matte gray example comes in.

The idea with this car was to give it a jet fighter look, and Kato went so far as to hire a professional air brush artist to spray on the sort of graphics you’d perhaps find on an F16.

As was the case with the JPS R35 GT-R, the conversion doesn’t come cheap. Depending on the choices you make and materials (full FRP, or with FRP carbon details) you are looking at between US$40,000 and US$60,000 for the parts alone.

It’s a substantial amount, but then again, has modifying supercars ever been a cheap hobby?

While the exteriors of both these demo cars are certainly eye-catching, there was something inside that Kawamura-san was excited to show me.

Basically, some trim details have the look of super-heated titanium, the sort of finish you find on a Ti exhaust system after it’s been properly heat-cycled. Except this is airbrushed on and then clear-coated for a very unique finish.

While both Huracáns have received a PP Performance ECU tune, which unlocks another 37hp from the naturally aspirated V10, I can’t help but think a twin-turbo kit from one of the US tuners mentioned earlier would be a better-suited option for cars that pretty much look like road-legal racers. 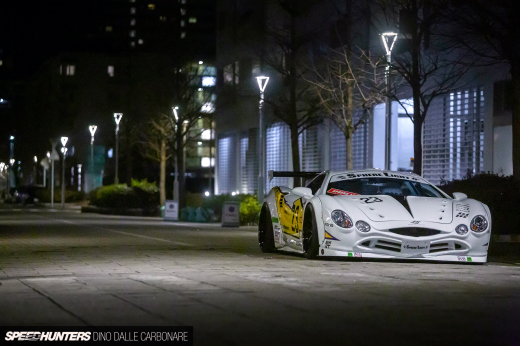 Overfender Everything: The Liberty Walk Orochi

Lovely, BUT: why there is never a picture of the side? It’s never possible to read clearly what’s written on the door! That’s a pity. It’s not the first time I noticed it... is there a reason?

it says "imagine all the people living life in peace"

The line reads "Imagine all the people living life in peace.", a line of lyric from John Lennon.

Those cars look so much like samurais on the last photo. Truly Japan style

Perhaps, in the truest sense of the term, this ‘Works’ kit is more akin to the race version of the Huracán than the other two are to theirs.


THIS!!!! This is the exact reason why I love the Huracan LB Works kit so much! But I think the reason why the "Silhouette" style works here is because of the Huracan's angular design itself. Remember how the good old Silhouette racers existed during a time where cars had angular bodies.

Definitely the best suited. Although Kato has just launched the Aventador kit, which looks mental...

Ah yes, nature's wildest bulls. Btw huracans are my second favorite lambos (second to mercies) and my personal choice.And I just noticed how their top backs look like Venenos, its pretty cool. Thanks Dino.

I have a thing for the Huracan too, loved driving that thing!

Any of those Fighting Star lambos kitted like this??

No they have their own original kits. It all seems to have quietened down however

Lambos look incredible stock. I like LB kits on these cars. Saw one locally last summer at a car show. Hey, if you got it, do it! I would. By the way, when you get to the states, go to Azevedo Motorsports in Linden, NJ. Not Rui's place but Diego's shop on Elizabeth Avenue. This shop stays stock with Audis, Bimmers, Ferraris, Volkswagens, Porsches, Lambos. They debadged and did my rear window on my MKIII Jetta.

Nice wheels! I hope we can start traveling soon!

As the Huracan is naturally angular, the better fighter theme would be the F-117 Nighthawk. The entire jet has faceted and saw-tooth panel edges for stealth reasons.

The final touches: Paint the car matt-black and gold-tint the window. hehehe

Maybe an owner will go for that paint scheme!

these are the supercar equivalent of an orange county chopper.