SHARE Sometimes, You Just Have To Shoot A Supra

It’s the end of a very long working Sunday.

You’ve battled adverse and ever-changing weather to get two solid features done. You’re sweaty, tired, thirsty and hungry, but the end of the day is in sight. All you can think of is the stress-free drive home, grabbing some food on your way, and relaxing for the remainder of the evening.

But then you see a JZA80 Toyota Supra hiding in the corner; you instantly know that the rest of your day is going to have to wait a little bit longer.

While this wasn’t a part of our plans that day, no Speedhunter worth their salt is going to pass on a car like this. Especially when the words ‘manual’ and ‘single turbo’ are used.

Suppose we better get the camera out again?

This isn’t Darren Coleman‘s first Supra. Since he sold his previous one, it left a 2JZ-shaped hole in his life, and the rest of this story is pretty much as predictable as you’re thinking. One Supra out, one Supra in.

Using what he learned with his first Supra, it didn’t take Darren long to put this one together in the exact specification he wanted. It’s a critical but often overlooked aspect of any build, in that Darren knew exactly what this car had to be from the get go. Not a track weapon or a 1,000hp drag machine, but a formidable GT with just the right amount of everything, with as little to detract from enjoying the car as possible.

A non-VVTi 2JZ-GTE converted to single-turbo with a Holset HE351, Sard Racing 650cc injectors, a Turbosmart 45mm Hyper-Gate, 3-inch custom intercooler, and a custom 4-inch exhaust leading to a HKS Silent Hi-Power rear section. An HKS F-CON Gold V Pro 3.2 is the standalone engine management in place, along with a GReddy Profec boost controller mounted on the steering column.

It’s not hugely powerful by Supra standards, probably 500+hp, but more than enough for the tight and winding driving roads we have here in Ireland. When it comes on boost, it – and this is about as politely as I can put it – f**ks off.

What I consider one of the best factory interiors to ever come in a production car, has only been mildly modified. A pair of matching Recaros, along with a Nardi steering wheel and a plethora of auxiliary gauges and controllers are all that’s needed.

Yes, that’s a screamer pipe exiting behind the front wheel. And yes, it sounds glorious on boost.

Stance is functional, and as the saying goes, the wheels make the car. They’re 18-inch SSR SP3s wrapped in Toyo Proxes R888R semi-slick rubber with BC Racing coilovers.

The V160 6-speed transmission, with a reputation for being reliable and dependable, has been left alone, save for an ACT 6-puck clutch to help with transmitting power through the otherwise stock drivetrain.

I don’t really have much extra to add or write about Darren’s Mk4 Supra, so I won’t drag this out. I will however leave some extra images below for you to explore if you wish.

Just a reminder, though: When the opportunity presents itself, always shoot a Supra.

I honestly love it. Supras are best like this. But that's just my opinion. Th Mk.3 is my favorite Supra, but If an opportunity came to get a Mk.4, I wouldn't turn it down.

Well done - taking opportunities as they are presenting themselves. Seems like a well balanced Supra. Just the right amount of aftermarket parts. I love the photos and would probably love them as well if a different red car was in them. They look fantastic with the low saturation backgrounds and make the colour really vibrant. Hope you eventually enjoyed a good pie on the way home - trying to wipe that smile out of your face. Best regards from Germany, Sebastian.

If I owned a Supra, this is exactly how I'd build it. Sometimes mild builds are better than "hard core" ones, because mild builds are more reliable and can be driven around all the time.

I do love the track oriented, time attack, rally,... builds and it never fails to impress me and wish i can have a similar car but recently "subtle, just enough, and simple" upgrades for road going cars like this perfect example are the ones making my heart beats faster; am I getting old or more realistic?

Awesome Supra ,, ive always loved them but seem to always get the latest wrx sti’s , but the New supra thats out jus may change my mind ,, 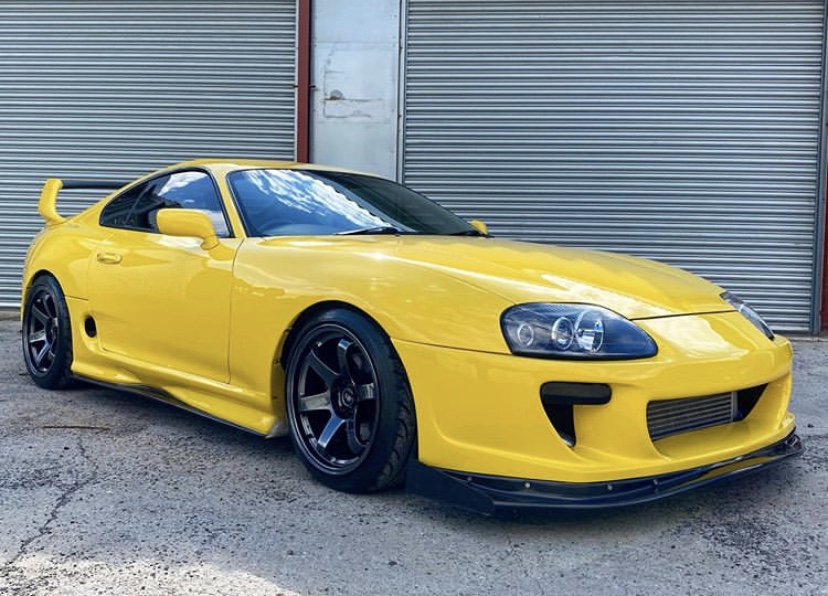 Really like the clean cut of the car.So simple but complex at the same time.