The small Yaris hatch isn’t widely known for its performance potential, but the next generation of rally cars this side of Toyota’s factory-backed WRC machine may change that. Perhaps this exclusive first-look at Australia’s first AP4-spec Toyota Yaris will challenge that perception.

The Bates surname may sound familiar to anyone with a passing interest in Australian motorsport, especially the rally side of things. For those of you who aren’t familiar, the Bates family has a proud history of building and driving some of Australia’s most successful rally cars. Harry’s father Neal partnered with Toyota in the late 1980s and dominated competition, and since then Neal Bates Motorsport has won an impressive four Australian Rally Championships and various other accolades for their great engineering work.

Growing up surrounded by the sport, and with his strong family legacy, it was only natural that Harry would eventually step into the rally scene himself. When asked how he ended up behind the wheel, he joked and was quick to blame his dad. Although the young Bates has only been driving in competition for three years, he’s already made an impressive career start by winning the ‘Future Star’ award in 2015 from the Confederation of Australian Motor Sport (CAMS).

Harry’s first competition car was a front-wheel drive Corolla. It may not have been as competitive as the current project, but it served him well and offered a lot of great first-hand experience racing. Before long, he found himself getting more heavily involved in both the sport and the family’s motorsport business, and nowadays, just like his father and uncle, Harry’s life revolves around racing.

His second car, and technically current car until the Yaris hits the dirt for the first time this week, was a factory-backed Toyota Genuine Parts S2000-class Corolla. It was a massive step up from the previous car, and last year he and co-driver John McCarthy drove it to third place in the Australian Rally Championship. Quite an impressive feat for such young driver.

The new AP4-spec Toyota Yaris should up the ante even further. While the naturally aspirated S2000-spec Corolla remained competitive, it was still a 10-year-old car, and a lot has changed in that time frame within the realm of motorsports development, something the team at Bates Motorsport are looking to capitalise on with the new build.

It’s an exciting time of renewal for Australian rallying. Fresh new drivers like Harry represent the future of the sport, and his new AP4 Toyota Yaris is an incredibly promising example of what the next generation of cars will offer the sport.

So right about now you’re probably asking what is AP4? Good question – I thought you’d never ask. Group AP4 is a relatively new rally category developed for national and regional competition for turbocharged four-wheel drive cars. It’s based on the principles of the FIA Group R5 category and is intended to create cars of similar performance, as well as that of the Super 2000 and Group N (including R4) categories.

The concept of the AP4 rally car is to produce a build specification that ensures cars can be locally made from locally sourced components, while still guaranteeing that the initial build, as well as ongoing running and maintenance costs, are kept within realistic bounds.

The short version: AP4 regulation cars should be faster, safer and cheaper to build than previous generations. Another benefit of the new class is its compatibility with World Rally Championship’s R5 category, enabling an easier transition across for drivers and cars who’d like to compete on the international stage. The way things are shaping up, it looks as though AP4 is future of the Australian championship and also across the Asia Pacific region. There are already a number of AP4 cars of differing makes and models contesting the New Zealand Rally Championship across the Tasman Sea.

It’s hard to believe now, but this tiny monster started life as an entirely standard Yaris. When I asked Neal about the build, he paused for a second, then laughed. “It’s a been a labour of love – and stress.” I’d assumed the car was completely factory-built when I first saw it, so outstanding is the level of engineering and fabrication. What’s even more astounding is that building the Yaris was a part-time passion project.

It’s been a long and challenging journey to transform this once sensible city car into one of the wildest gravel-spraying monsters Australia has ever seen, especially as it wasn’t funded well enough to be treated as a full-time project. The entire team dedicated hours upon hours of their personal time to complete the build.

As you’d imagine, a huge amount of time is invested into the design of a purpose-built race car like this. During the ideas phase, the standard Yaris was completely stripped back to a bare shell, but once the plans were finalised the chassis work was quickly underway. The tunnel was heavily modified for the all-wheel drive system to fit snuggly underneath. The strut towers also went under the knife to enable maximum travel in the new suspension.

The fuel tank area was also heavily modified and replaced with a dry-cell.

The team performed one additional major change to the chassis. A very forward-thinking decision was made to swap the driver position to the left-hand side. Why the change? Driving on the European side might have its advantages for young Harry later on in his career.

The next stage was to fabricate a full roll cage for the tiny Yaris, and as you can see from the hatch view, safety is paramount. With the fab work completed, it was time to send the improved chassis out for painting prior to the assembly process.

If you’ve ever installed completely custom parts, you’d be familiar with how complicated even the smallest of changes can potentially be as you chase the flow-on effects. So imagine building a a car like this for the first time. As complicated as it got, I’m sure that watching it all finally come together would have been extremely satisfying.

Toyota’s high-revving 2ZZ-GE is responsible for powering the Yaris. The DOHC 16-valve VVTL-i engine was originally a 1.8L but has since been de-stroked to a smaller 1.6L (1,613cc) capacity to meet class regulations. If you’re paying attention, you would have noticed that the turbocharger and intake are missing in the image above. At the time of our shoot, one of Bates Motorsport’s fabricators was busy welding up the final brackets and manifold.

Insert turbo here. The missing turbo and intake duct do present an opportunity to check out some of the finer details, including the left-side engine mount which was fabricated in-house using a five-axis CNC machine.

Up front, a custom PWR intercooler will do its best to reduce the air temperatures of Australia’s extremely harsh climate.

A MoTeC M150 engine management system has been installed in the passenger footwell with show car precision. It relays the important information back to Harry through a MoTeC C125 color display/data-logger.

The underside of the Yaris looks equally impressive, and I almost feel sorry that this is going to be peppered with rocks and gravel and who knows what else. You don’t need to be a motorsport engineer to appreciate the clean fabrication work and potential clearances the new suspension arms will offer.

Maximum stopping power is provided by two pairs of 300mmx30mm slotted discs and 4-piston AP Racing calipers. That’s right, the same brakes have been fitted to both the front and rear of the vehicle. A Sadev hydraulic handbrake is also fitted.

Check out the gnarly guard fitted to protect the rear calipers from the constant barrage of high-speed rocks and other debris from the front tires.

Independent MacPherson struts with Australian-made MCA coil springs will be pushed to their limits as Harry tries to conquer the rough terrain. The coils fit over remote-reservoir dampers that will do their best to smooth out the ride and stop the car from bottoming out when landing gravity-defying rally jumps.

In a similar situation to the brakes, the suspension is mirrored as closely as possible in the rear end. The car’s balance is exceptionally important to a driver when navigating through a special stage.

The final piece of the puzzle, a set of 15×7-inch Speedline Gravel rims were fitted up as we removed the Yaris from its work stands. Wow. If it goes even half as fast as it looks, the competition has reason to be very nervous.

Only time will tell if Neal Bates Motorsport’s extreme AP4 Toyota Yaris is the key to a successful Australian Rally Championship season, but judging by the team’s highly successful past both with racing and building amazing cars, it’s looking very promising.

Knowing that the car was built to meet both local and international regulations, who knows where Harry and his Yaris might end up later on down the (very dusty) road. We won’t have to wait long to find out what the package is capable of though, as I’ve just flown down to South Australia to meet back up with Harry and the team and be taken for a blast down one of the closed-road special stages set up for the Lightforce Rally SA. Stay tuned for that!

I wish someone would take Prius C to do the same, but for Rallycross... 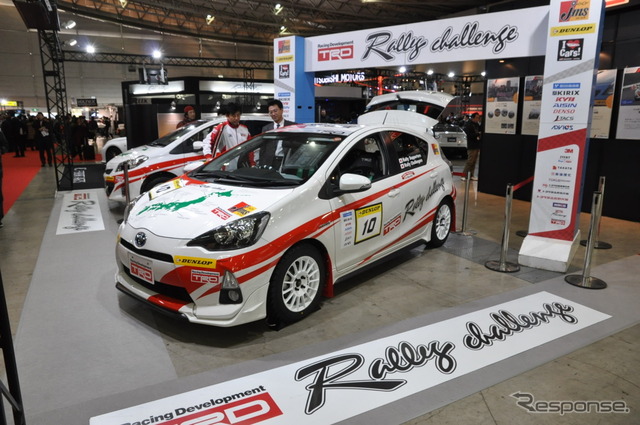 obviously lacking overfenders but you know...

*271lbs... are we sure that's not just the drivers wet weight

good to know wonder what it is in standard trim

Well that answered my question if a 2zz fits in an Mk3, awesome.

of course it fits... it fits Mk.1 & Mk.2 too, but required reworked mountings

Is it me or the front suspension seem to be running negative caster?

The top of the strut is indeed inclined toward the front of the car, but remember that caster is not so much the strut angle as it is the angle relative to vertical of an imaginary line passing through the upper and lower steering pivot points. In the case of the modified McPherson strut suspension we see here, the upper pivot point is the strut mount at the top of the tower, and the lower pivot point is a ball joint attached to the lower control arm and the steering knuckle/hub spindle well below and likely slightly forward of the spindle center.

I hope that helps.

I am such a sucker for workshop shots, pulled me right in and I wasn't disappointed at all. Race cars will always be cool.

Take it to the US circuit!

What a beautifully executed build! very jealous! shame its going to take a thrashing!

Even if i have a soft spot for rally cars, this is one of the best builds on the site. Genius.

Amazing work. Makes me want to properly learn how to use my strobes; only ever used them on people before.

ya know........ I tend to think, that if small cars were sold in rally spec, America might not buy as many "crossovers" (I loathe the term, they are simply wagons) - but imagine a small car like this, some ground clearance, and a 220hp motor for the street. Ford managed to sell 48,000 Fiesta's last year (how many were ST's? - I dunno) - and all that car needs is some ground clearance..... Toyota is getting back into rally..... hopefully something rally related gets back into the dealership