USA’s motoring landscape momentarily changed in the early 1960s when new car buyers began being drawn towards smaller, more fuel-efficient European vehicles – like the Volkswagen Beetle – instead of the biggest gas guzzler they could get their hands on. To meet the market, stateside manufacturers were left with little choice but begin rolling out new ranges of compacts with smaller physical and mechanical dimensions. Plymouth had the Valiant, Ford had the Falcon and Studebaker had the Lark. Most important to this story however – Oldsmobile had the F-85.

From its 1961 debut the F-85 was made available in two specification levels, both of which used a small 215ci (3.5L) aluminium V8. In basic form with 8.8:1 compression and a 2-barrel carburettor the engine made 155hp. In Power Pack guise, that number was increased to 185hp through 10.25:1 compression and a 4-barrel carburettor. Although performance was markedly better than that of cars like the Beetle, Oldsmobile’s engineers saw room for something even more powerful – they just needed to figure out a way to achieve it without increasing engine displacement, or decreasing smooth running and driveability in any way. Gilbert Burrell, Oldsmobile’s head engine designer, found what he was looking for in turbocharging – something that had never before been seen on a production passenger car.

Oldsmobile partnered with the Garrett Corporation – then, a leading manufacturer of industrial turbochargers – and Burrell began working alongside engineers in Garrett’s newly-formed AiResearch department – a specialist division set up to develop turbochargers for the automotive industry. Together they developed a small diameter turbo and associated system exclusively for a new, high performance F-85 coupé variant called the Jetfire.

Weighing in at around 35lbs, Jetfire’s bolt-on kit was based around a Garrett T05 turbocharger, which attached to the engine’s intake manifold as a carburettor normally would. Then, a specially developed, single-barrel Rochester sidedraught carb was positioned ahead of the turbo in a draw-through configuration. Oldsmobile upgraded its 10.25:1-spec 215ci V8 with heavy-duty pistons, conrods and main bearings, and fitted a revised distributor, coil, fuel pump and larger radiator. The transmission was also reinforced. One thing it didn’t alter however was the engine’s high compression ratio, which of course meant it would be susceptible to detonation under full throttle, or load.

To counter-act this Oldsmobile employed a novel ‘Turbo-Rocket’ water/methanol injection system, which you can see illustrated above. When the turbo operated it pressurised the system’s tank, which caused a proportionate amount of ‘Turbo-Rocket Fluid’ (a 50:50 mix of distilled water and methanol and a little rust inhibitor) to squirt into the intake system between the carb and the turbocharger and cool the intake charge through heat absorption. While the system did work – albeit crudely – the contents of the 5-quart (4.7L) reservoir could be emptied in just 225 miles if you drove the car like you’d stolen it. When that was about to happen an ‘Add Fluid’ light illuminated on the car’s console-mounted boost gauge, which employed a needle that swung between Economy and Power dependent on how sensible the driver was being with the gas pedal. When the Turbo-Rocket Fluid mixture ran out altogether a complicated double-float and valve assembly in the system would shut, effectively reducing performance to preserve the engine. In another safety measure, dual wastegate diaphragms were employed (the second in case the first failed), as was a pressure-sensitive cap on the Turbo-Rocket fuel reservoir, which would pop off if maximum pressure was exceeded.

On the road boost built from 1,000rpm, and by 2,200rpm 5psi (0.34bar) was achieved. Although peak power was greatly improved, the big news was torque, which was increased by 30 per cent over the naturally aspirated 185hp V8. A massive 300ft-lb was delivered by 3,200rpm, with 280ft-lb available from just 2,000rpm. That output equipped the Jetfire with untouchable-in-class performance and testing by Car Life magazine at the time revealed a 0-60mph time of just 8.5 seconds – an impressive 2.5 seconds quicker than the naturally aspirated 185hp F-85, and almost twice as quick as the regular 155hp variant. Furthermore, the turbocharged Olds’ could accelerate to 100mph almost 10 seconds faster than its quickest sibling, before reaching a maximum top speed of 112mph. Check out the video to see how Oldsmobile sold the innovative concept to the public.

Most of the turbo Jetfires that Oldsmobile sold between early 1962 and late 1963 when it was discontinued suffered from mechanical, and ultimately reliability issues. The boosted engine had cooling problems and the complex fluid injection system proved to be particularly erratic in its operation. Many engines succumbed to detonation too after owners began filling their car’s Turbo-Rocket Fluid reservoir with tap water instead of the special water/methanol mixture which was only available from Oldsmobile dealers. In the end the carmaker addressed the shortcomings by offering owners the opportunity to have their Jetfire’s turbo system removed entirely, and the intake manifold retro-fitted with a simple, no fuss, 4-barrel carburettor arrangement, at no cost.

By 1964 the compact craze had wavered and big ol’ oil burners began rolling off the automobile assembly lines of Detroit once again. Apart from the Chevy Corvair Spyder which arrived in showrooms across the US just a month later, the world wouldn’t see another turbocharged production road car until BMW pulled the wraps off the manic 2002 Turbo in 1970.

While you probably won’t find the turbo Jetfire on any top 10 American automobile icons list, the car’s rarity and collectibility was recently realised on eBay when an all-original, numbers-matching car sold for US$42,100. 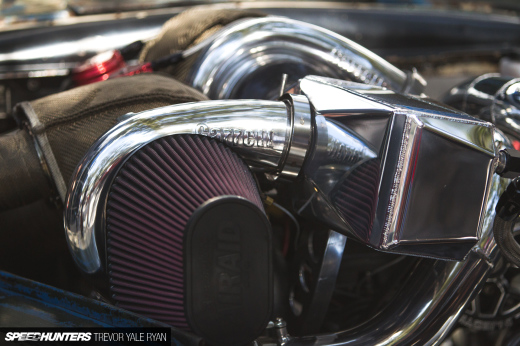 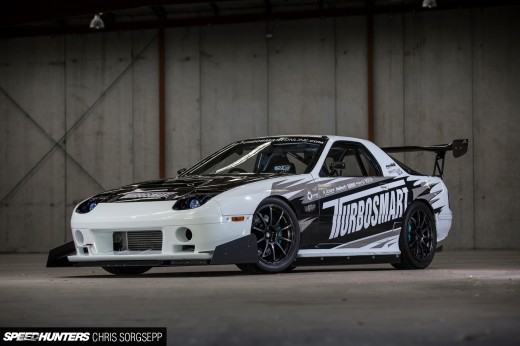 I think I speak for the U.S. when I simply say Murica'

What an aspirational time that must have been.

The difficult we do immediately, the impossible takes a little longer.

The future was going to be jet-powered, nuclear-powered, space age and thoroughly awesome.

And all of it was completely analog.

The only thing that would've made it better would be a screaming Hair Metal soundtrack.

Ice Age living in the cold war was so romantic.

sure ease when competitor countrys car industry is Rubble...
do love there old style though..now look there cars..man..fall mighty

@Frozenstar Ice Age In some ways, it was - and there's no denying that it made us ambitious.

I really find it funny that the US started what is now a staple of Japanese and European cars; small displacement, turbocharged compacts.

Oldsmobile might have been first by a couple of weeks, but theirs was a poor execution.  Chevrolet built a proper turbo motor: forged-pistons, forged-rods, high-flow exhaust, and lowered compression. The Corvair Spyder/Corsa lasted from '62 to '66.

Hydrolastic You realize that GM owned and still owns Oldsmobile right? So GM was just using this as a "test" if you will. So of course it got better. The next time around they knew what needed to be changed

Ice Age well, ye. living in the shadow of the nuclear war makes people harder, but honestly i like our world a bit more

ACSmith6589 Hydrolastic
you do know that Olds is no more right?

What? You can have an article on the 215 without mentioning Buick?

And is "aluminium" the Brit way of saying this element?

@Hanh Um nope, you're probably thinking of Buick which still exists.  Pontiac, Olds are both gone.

It's the real way to say aluminium

WHOA! A car that actually had "Vtec" fluid!!

In response to whoever said Oldsmobile is still around, not sure which rock you've been living under, but the last Olds rolled off the line in April 2004.

Well yes but they were considered compact in the US market at that time.

LukeEVOVIII The element was originally called Aluminum by the american who first isolated it from its oxide alumina. Later the suffix was changed to -ium because other elements were named with that suffix. However, the -um suffix was already part of the common vernacular and it stuck.

I'm going to put turbo-rocket fluid on my water/meth res hah. It sounds a lot cooler than "bost juice."

I learned something interesting about the water/meth fluid I bought off the internets when I first got my kit...its basically window washer fluid, maybe with a finer mix but basically the same water/alcohol ratio and different dye.
When I called my local speedshop asking about supply any and they told me that I was like wut..."Yah there's a 750hp Mustang around town uses washer fluid. Just don't use the special winter mix." Okie doke.

Hydrolastic The olds had forged pistons and rods too.. High compression is a good thing. Lowers the boost threshold and retains off boost performance. The low compression, no overlap, turbo cars of the 70s and 80s were awful.

buzzboy LukeEVOVIII Im pretty sure Sir Humphry Davy and latter chemist Joseph Black (who based the word on alum, a french word for a type of Mineral) were very much British chemists, Aluminium was named prior to its isolation by said Sir Davy. 19th Century American Chemists and Physicists preferred the British spelling at first, (commenting it sounded more classical) however due to a lack of dictionaries/networks/international travel/the ability to read Sir Davy's at best chicken scratch hand writing... multiple spellings of the same word arose on each side of the Atlantic.

birelmotosport Hydrolastic I woundn't say ALL Turbo cars from the 80's were horrible....

milkplus I know right?! But Ralph Nader hated it and GM had to pull the plug.

Then Porsche went and copied it and everyone's like "oh my gosh, it's so Awesome!". It's like the Corvair Monza turbo never existed, never mind the Stinger.

Dill Pickle I find it funny how so much of what is taken fro granted in the automotive world was in fact pioneered and originated in the US auto industry. Yet everyone acts like Japan and especially Europe were and are the end all be all of Automotive tech.