I often wonder how different the World Rally Championship might be today if Group B hadn’t come to a premature end in 1986. When you consider how crazy the rally giants of the mid-’80s had become during their Evolution phase, change was always going to happen, but before Group A regulations were adopted by default and the cars became production-based, the WRC’s governing body had planned to introduce a silhouette formula called Group S.

One manufacturer who was gearing up well in advance of Group S’s January 1, 1988 roll-out was Toyota, but after Group B was banned – effectively killing off Group S in the process – the Japanese manufacturer never had the chance to fully realise the potential of its machine codenamed 222D. Only a handful of the awkward-looking AW11 MR-2 inspired prototypes were ever built by TTE (Toyota Team Europe), but it’s cool to see that at least one of them was perfectly preserved and today forms part of Toyota Motorsport GmbH’s private collection – something Jonathan will be showing us a lot more of in an upcoming post.

There’s not a whole of hard data on the 222D, but it’s believed that the black car was developed with 600hp Toyota 503E four-cylinder race engine coupled to four-wheel drive underpinnings in a chassis that weighed just 750kg (1,650lb). Group S had a suggested power cap of 300hp, so who knows where it would have ended up, had the programme actually come to fruition. This Japanese clip from the 2007 Goodwood Festival of Speed when TMG brought the car out for a somewhat restrained squirt up the driveway hill climb, at least gives us a taste of what might have been though…

The Lure Of The MR2 Continues 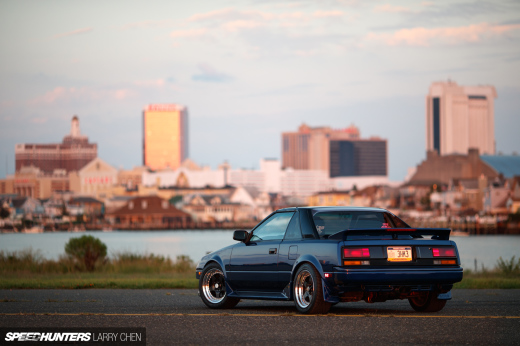 It was a mistake from the FIA to bring up the Group A instead of the Group S cars back in 1987. Group S could have been a lot saver than Group B and a lot more exciting than Group A. Group A cars were Touring Cars (as Group A was the same formula for both Touring and Rally cars until '93) with AWD and rally suspension, a bit up on HP and that was it. I would have preferred the next-gen Lancia Delta S4, the Opel Kaddet Turbo S, and that Toyota MR2 (222D) than a underpowered rally Mazda 323 which was hardly changed from it's roadcar counterpart. I think everybody wonders what would have happend with the WRC if the FIA took the Group S way.

Wilton super car sunday will have a fair few group B and aborted S cars there apparently, (probably a lot of TVRs and other such near-xotics as its a p!ston heads event)

please bring group b back FIA, nothing has compared to it since.

joshwfifty5  I've got a feeling a lot of the group S cars would of looked like as RS200 shaped.. something as the car was just so dam awesome.

I don't know why, but this reminded me of the little Subaru Jackie Chan drives in cannonball run. Lol

JakWhite TarmacTerrorist  yeah thats the one, Im debating it myself but the 'members' who drive their cars to it are rage inducing at best, not sure I want to be mistaken for one of them by an angry local haha.

Awkward-looking? I want a daily-driver that looks EXACTLY LIKE THIS. Everything else on the road is a bloated jellybean.

That picture was taken by GF Williams. I think it would be nice to credit him - https://www.facebook.com/GFWilliamsPhotography

Having worked at the Toyota facility where this car and almost every other motorsport related toyota vehicle is kept i was blown away by the gems hidden there, and this was one of my favourite cars to have a look round. if only these were let loose

I just love Japanese-English. They described the 222D as a "2-little turbocharged 4-cylinder", with emphasis on "2-little".

Am I the only one who noticed the subtle joke in the use of the theme song? "It's hip to be square......" lol.

David__VDB I have to disagree with you. Group A rules requiring large numbers of quite specialised road cars to be built meant that many more of us got the chance to get behind the wheel of something turbocharged, four wheel drive and with the potential to shame supercars.
Lancer Evo's, Impreza WRX's, Escort Cosworths, Celica GT-fours and Delta Integrales are just a few of the awesome (and readily available for not much money) road cars that would not exist if it weren't for Group A being adopted as the top class after the end of Group B.

There were at least 2 different versions of this car. One was a transverse mounted four with a MASSIVE turbo, (think 600+hp big!), and rear wheel drive. The other was an inline four with an Xtrac four wheel drive system. Motors were either 503E or 4T-GTE. Rumoured was a V6 version but never seen in public

So very excited for this

About time someone is going to do a proper article on this car. Will be very interesting what kind of info is uncovered.

H05TYLoh I didn't know that, thanks for the info. Good point.

last i recall, the original Group S specifications called for a 1.2L engine.  the 503e is a 2.1L engine.
i'll check my rally book that covers this specifically this evening and post back what it details.

Wish he pushed it a little more but I get it, its a rare classic. Awesome car!

The Group S regulations were shelved in 1987, but later became the basis for the World Rally Car regulations that came into effect in 1997.
The days of Group B were numbered by 1986, even before the FISA intervened mid-season. So in answer to your question "how different the World Rally Championship might be today if Group B hadn’t come to a premature end in 1986" the answer is really "not very!", as the same regulation set would still be in place.

As an aside I still personally believe that the Group A era was the best overall period of the WRC; the separation between the stage car and showroom was the smallest its ever been and the cars were still spectacular to watch.

Such an amazing car. I would love to see it battle a RS200. Looking forward to the detailed post.

Such good points. I own a ST185 Celica and it was very very close to what they competed with. Sure wish a Ken Block Fiesta was available.

CSAlltrac I would love to see a return to Group A regulations which would force the manufacturers to produce a showroom model that reflects the rally car, however in the current economic climate that is sure to scare off more manufacturers rather than attract them: exactly what the WRC doesn't need right now!